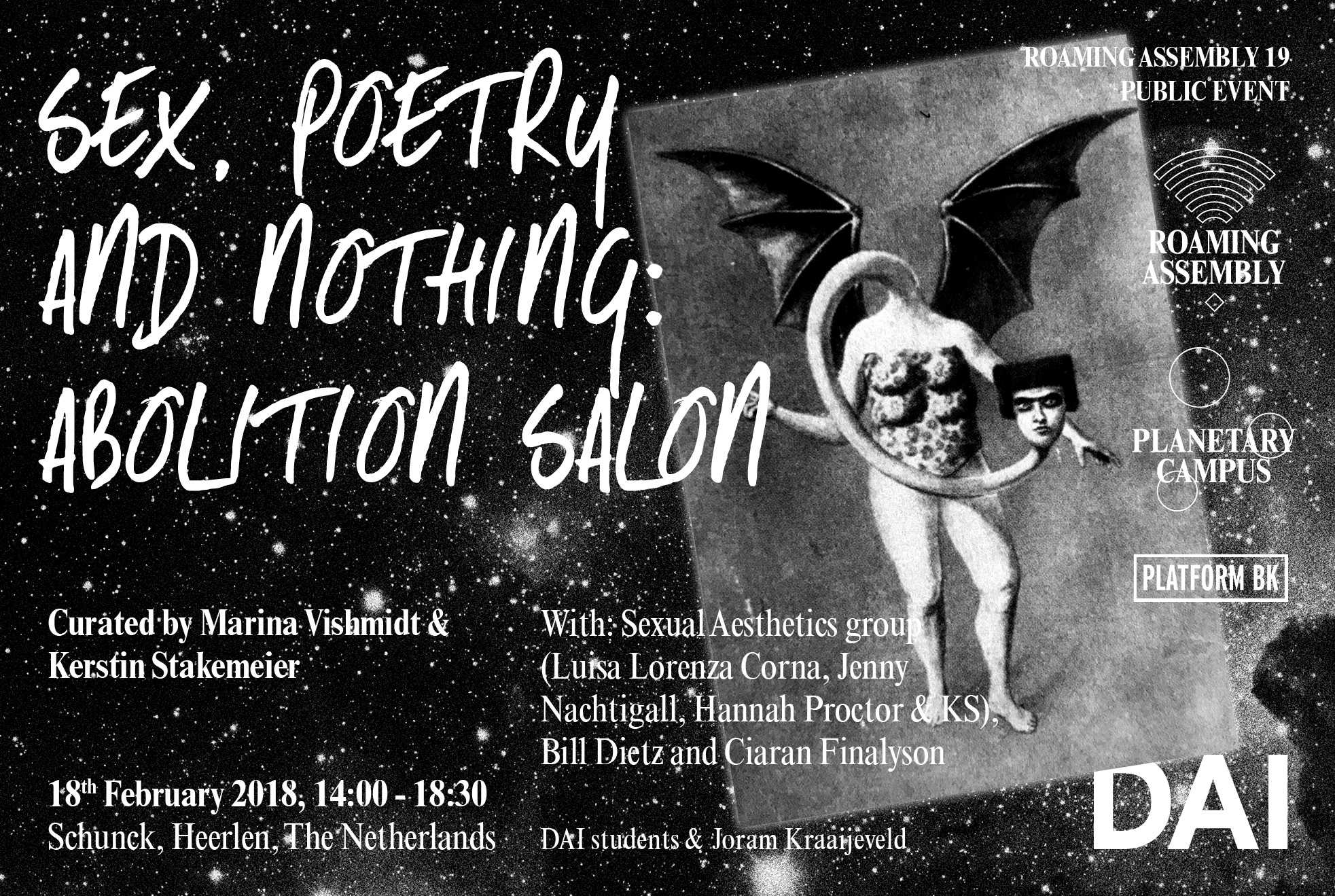 In their Roaming Assembly at the DAI guest-curators Marina Vishmidt and Kerstin Stakemeier have invited one group and two individual contributors whose inputs will aim at decentering both the concept of autonomy and of reproduction.

Sex, Poetry And Nothing: Abolition Salon

WALTER books will join Roaming Assembly#19 with a careful selection of books on offer, including Reproducing Autonomy by Marina Vishmidt and Kerstin Stakemeier.

Starting from their joint publication Reproducing Autonomy, Marina Vishmidt and Kerstin Stakemeier have started to rethink the relation of those two concepts with regard to their political and aesthetic roles within the systemic developments of the last years. Reproduction served as an immanently affirmative concept that 1970s Marxist feminists inserted into the critiques of capital in order to socialize them. Yet lately it had come to resurface as the figure of an unwanted return, a reproduction that is not only against the system of capital but also one that risks naturalizing its given forms. Vishmidt and Stakemeier have, in their individual work, come to engage a series of constellations that look to disintegrate this connection: looking at the degeneration of reproduction (Stakemeier) and the transvaluation of reproduction (Vishmidt), they have started to reconnect their thinking, seeking out the potential forms of autonomies these processes could enable. In their Roaming Assembly at the DAI Vishmidt and Stakemeier have invited one group and two individual contributors whose inputs will aim at decentering both the concept of autonomy and of reproduction. The contributions will intersect on the terrain of degeneracy as an approach to labour, value, art and emancipation which does not eclipse power and totality but grips its materiality with figures of negation and singularization.

The day will be divided into two thematic strands which will be tightly and unpredictably interwoven: sexual aesthetics and abolition. By 'sexual aesthetics' we mean historical examples of aesthetic practices which deliberately break into the modern standards of the ethical life of sexualization, seeking not so much to widen those standards, but to erode its reproductive function within life under capitalism, and 'abolition' invokes both practices and the imperative to negate that is informed by material histories of struggle and that can take ontological, aesthetic and political forms.

14.10 - 14.25 welcome to the Planetary Campus by Gabriëlle Schleijpen, director DAI

Marx’s joke about the worker’s freedom-in-the-double-sense, which named the irony of capitalist emancipation, received its most substantial elaboration, extension, and transformation in Saidiya Hartman’s Scenes of Subjection, a landmark study of the deliverance of 19th century black Americans from the hell of chattel slavery into the maw of wage labour and debt peonage. The history of this thwarted transition and the theoretical elaboration of what Hartman has named “the afterlife of slavery” as a condition of the contemporary has occasioned the irruptive rethinking of modernity over the past thirty years as the discipline of Black Studies has moved to take up the “unthought” position of the slave.

At the same time, the 19th century gave rise to another crucial yet no less illusory emancipation– that of the work of art, which, in becoming autonomous, came, too, to resemble to bourgeois subject. With this, the artwork emerged as the privileged and perhaps only non-ideological (because wholly and transparently ideological) position from which to think what Adorno called the “global social subject,” which has not yet emerged and but which remains necessary for any adequate thinking of the relation of history to freedom in light of past and impending catastrophes. This talk seeks after a vantage from which to think this double (and as Nahum Chandler would have it, ‘and thereby never only double’) heritage of embourgeoisement and will take as its object the practices of conceptual artists Cameron Rowland and Ralph Lemon, both working through the afterlife of abolition.

16.00 - 16.45 presentation by Jenny Nachtigall (followed by a conversation with Marina Vishmidt & Kerstin Stakemeier)

Tracing the emergence of a “sexual aesthetics”, from the 1960 onwards Peter Gorsen engaged with different forms of an asocial sensuality that conceived of bourgeois sexuality as a profoundly pathological terrain. Sexual aesthetics systematically displaced the notion of aesthetic beauty by its disorganization and disengaged the old bond between aesthetics and ethics. Gorsen, a former student of Adorno, had recently finished his dissertation on the antinomies and self-abolition of phenomenology and life philosophy: Although for him the “phenomenological competence” of sexual aesthetics too bore the traces of these antinomies, it nonetheless figured as a “materialist opposition” against the delimited ‘formalism’ of both bourgeois sexuality and a narrowly defined field of disciplinary aesthetics. By the 1980s, however, the hopes attached to a fundamentally expanded notion of sexuality as an aesthetic figure of intensified life increasingly floundered, converging with a commodity aesthetics in which all objects assumed a sexual(ised) form. Against this backdrop, what would be an actualized take on “sexual aesthetics” and how do more recent critiques of an ontologisation of sexuality as fundamentally queer (e.g. Rosenberg) relate to it? Thinking through notions of form, transgression and degeneration the contribution departs from the (broken) relation between modern and contemporary manifestations of “sexual aesthetics”, probing the openings and limits it might entail today.

Luisa Lorenza Corna's presentation will examine a selection of writings by Carla Lonzi, founder of the feminist group Rivolta Femminile (Feminine Revolt) in the 70s in Italy. The group initiated what was later called Italian feminism of difference (femminismo della differenza), whose activity remained external to the mainstream political arena, and materialized in practices of consciousness-raising and in the publication of texts which were disseminated through non-institutional circuits. The talk will address Lonzi's theoretical production in the light of the theme of the workshop, 'Aesthetics of Sexuality'. In particular, it will focus on the text 'The clitoridian woman and the vaginal woman' (1971), in which Lonzi explicitly addresses the theme of women's sexuality, and on a selection of excerpts from Lonzi's personal diary  (Taci, anzi parla, 1977). In the first text, Lonzi affirms the clitoris as a site of woman's autonomy and invents the character of the 'clitoiridian woman' as opposed to the 'vaginal' one, whose sexual pleasure and identity appear wholly subjugated to male's domination. In the diary, these two 'figures' will acquire concreteness and will be associated with a series of actions and attitudes performed by Lonzi and her feminist friends taking part in consciousness-raising groups. I will illustrate that the expression 'clitoridian woman' doesn't designate a determined subject who has already achieved liberation, but a variety of gestures aimed at resisting patriarchy. In the final part of the presentation I will place emphasis on the potential ensuing from the indeterminacy of Lonzi's fictional character, and will discuss its relevance to contemporary feminist debates about subjectivity.

Hannah Proctor's presentation will explore the Living Theatre's relationship to Gestalt Therapy in 1950s New York and will draw on an on-going collaboration with art historian Larne Abse Gogarty. Proctor and Abse Gogarty have been working on a project called 'communist feelings' focusing on disillusionment and investment in political groups. This discussion will turn to an artistic and psychological moment from the 1950s to think about its aesthetic, political and theoretical origins in German holism and psychoanalysis, but will also consider the ways in which some of the ideas developed were taken up around May '68. The focus will be on a contradictory relationship between social transgression and improvisation, on the one hand, and natural harmony and essentialism on the other.

Note: a group of DAI-students guided by Mercedes Azpilicueta and Joram Kraaijeveld have been preparing themselves for this event during a series of Planetary Campus / The Factory workshops. They will contribute to the discussions.

Admission is free ~ but please join the event on facebook ~

If you wish to join our communal dinner around 19:00, please be sure to make a reservation before Friday, February 16 you are welcome to contact Nikos Doulos.

This edition of the Roaming Assembly is generously hosted by Schunck* and will take place in the awesome Glass Palace, Bongerd 18 in Heerlen at less than 5 minutes walking distance from the local train station.

Special thanks to Joram Kraaijeveld and Platform BK. Without their interest in a collaboration with DAI and more particularly without Joram's profound interest in DAI-tutor Marina Vishmidt & Kerstin Stakemeier's joint publication Reproducing Autonomy this edition of the Roaming Assembly would not have been realised.

Planetary Campus is generously supported by the Innovations Fund of the