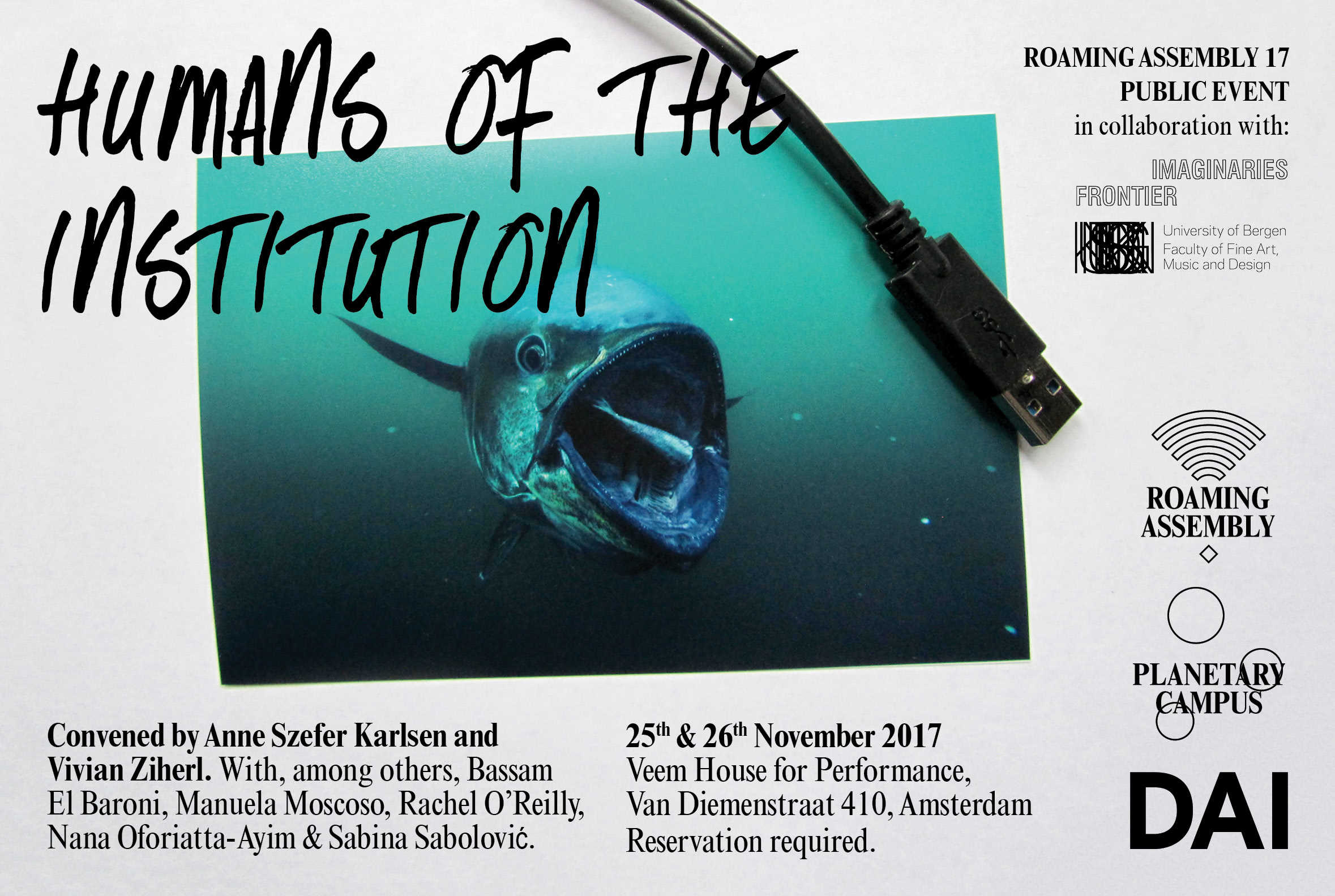 LINK TO DOCUMENTATION OF THE SYMPOSIUM

Dear friends and relations of the DAI,

Humans of the Institution is an international three-day gathering in Amsterdam, taking place on 25, 26 and 27 November and created to look closely at who ‘makes the present’, by foregrounding the freelancer in the arts and within globalising dynamics more broadly. The symposium is organised by curators, based on experience, and encourages the participation of artists, writers, journalists, designers among other 'content producers' and freelance workers.

By focusing on the curator, Humans of the Institution will be a nuanced debate important to freelancers and institutions alike.

Humans of the Institution engages with a large number of humans and institutions, including, the Dutch Art Institute. Humans of the Institution merges with our Planetary Campus and, for once, absorbs our Roaming Assembly, which usually lasts no longer than one Sunday, but for this occasion is folded into the intensive weekend-programme, thus offering our master students in Art Praxis ample possibilities to profoundly engage with the discussions on the shifting contours of the global and the local, and how this shift is influencing the working conditions and methodologies of freelancers today.

The programme foregrounds freelance experiences in the arts, taking into account transforming institutional structures, formations of non/employment at global scales, and emerging regimes of networked governance.

ROAMING ASSEMBLY 17 ~ HUMANS OF THE INSTITUTION

Among the many guest presenters, two core DAI-tutors:

Saturday, 25 November | Whose Global, Whose Local?

Rachel O’Reilly collaborating with Danny Butt, will present the talk Desedimentation, Delamination, Deconstruction: Boycotts Unseen or that Never Eventalise where they discuss the question: How do humans constituted in today’s market navigate the 'freedom' in their 'freelancing'?

Despina Zefkili will follow with a talk entitled Energy and Sustainability – 'The Southern Perspective'. Zefkili will share experiences of working in the arts in Athens problematising the image of the city as a southern experiment of creative energy and sustainability in times of crisis.

Ahmed Veriava’s keynote is titled Provincialising Work. Taking struggles in the city of Johannesburg as a starting point, he will describe how work is increasingly less a central point of reference in the emergence of new political subjects or the expression of antagonistic judgments. He also suggests that we need to go beyond a work-centred political and practical imagination in order to grasp the heterogeneous strategies through which value is produced and appropriated under conditions of contemporary capitalism

In her talk Against Curating as Endorsing, Antonia Majaca will consider the role that the 'independent curator' - as the emblematic 'confidence man' - has played in the slow 'death of the intellectual' and will suggest a schizo-analytical spell for both the curator and the art institution which might help us conjure up the image of curator anew.

In his talk The Post-Agonistic Institution: Art, Democracy, and the Curatorial, Bassam El Baroni will address what is often referred to as the ‘crisis of democracy’ under neoliberalism, and how the extended field of art has responded.

Tiziana Terranova’s keynote is titled Competition and Cooperation in Social Cybernetics, interrogating whether social computing today, as a departure from early sociocybernetics, can help to understand how institutions instigate and mobilize cooperation and competition; and whether social network theory can be of any use for oppositional politics.

the DAI-community, however, will not participate in them, as on that day we have set out to organise our own, closed session in Amsterdam.

Humans of the Institution weekend programme will stream live on humansoftheinstitution.works

Tickets for the weekend can be booked here https://veem.house/humans-of-the-institution.

Humans Of the Institution  is co-organised by Curatorial Practice (UiB) and Frontier Imaginaries. It engages with Amsterdam Art Weekend as well as with the DAI's Planetary Campus and Roaming Assembly. It is hosted at Veem House for Performance, and in partnership with de Appel.

As infrastructure Planetary Campus is the container for several activities initiated by the DAI. Key part is the Roaming Assembly, a recurring public symposium scheduled to take place once a month, functioning as it were as the DAI-week's 'centerfold' event. This state-of-the-art speculative and hybrid program explores contemporary themes and topics of relevance to the thinking of art in the world today.

Empowered by ArtEZ University of the Arts.