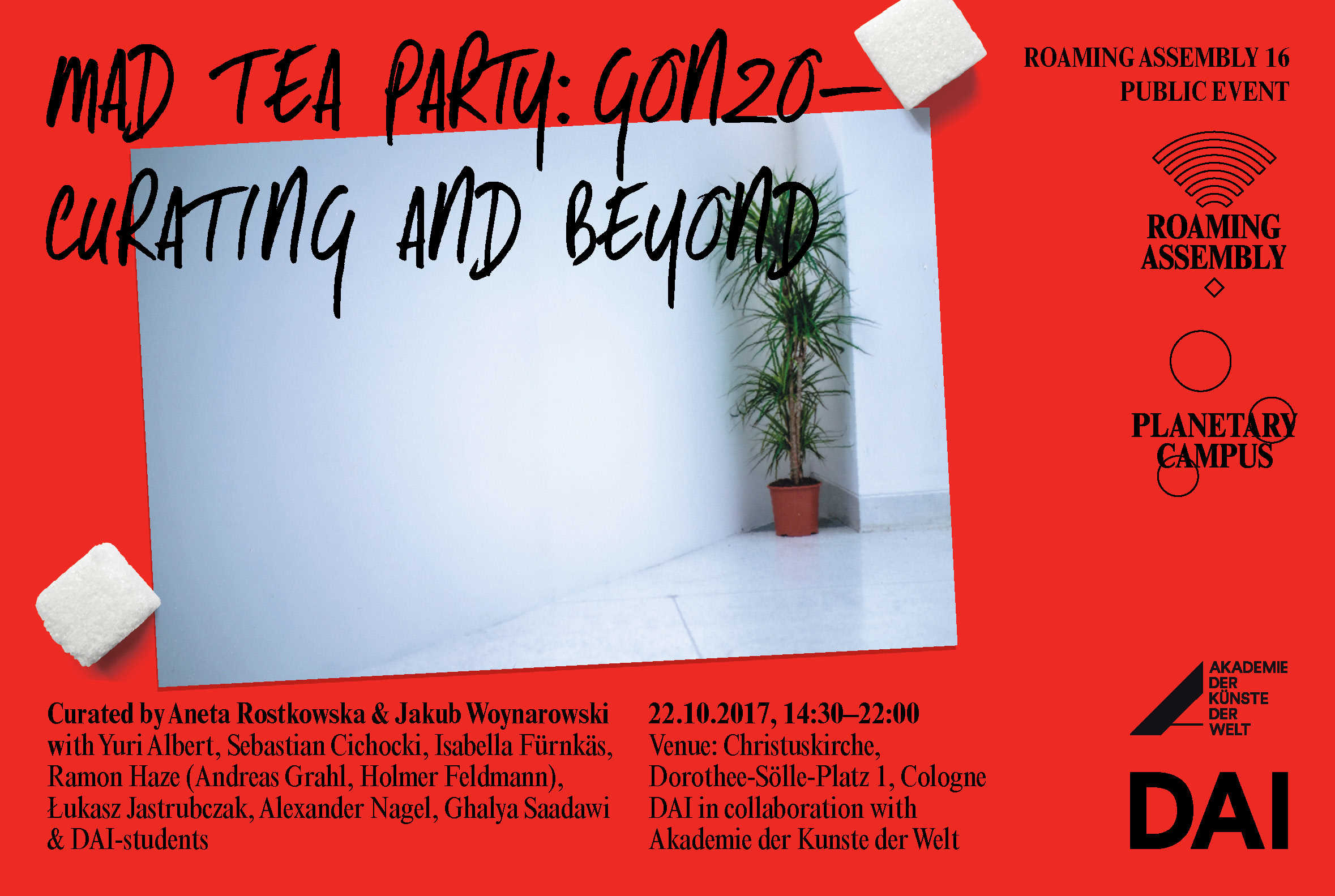 Over the past one and a half decade the Dutch Art Institute, among many other configurations, has been operational as a partly nomadic school. Since the beginning of the current academic year, 2017-2018, we have embarked on a radical new trajectory: we officially bade farewell to bricks and walls, as from now onward DAI ROAMING ACADEMY 'mobilizes our bodies, our intelligences', at changing locations in-and outside of the Netherlands, where we will team up with a wealth of like-minded, befriended humans and institutions.

Thus, our second Planetary Campus of this year, will take place in Cologne, where you are most welcome to join us, Sunday October 22, for our

this time co-produced by the Cologne based Academy of the Arts of the World and embedded in their autumn program STEALING FROM THE WEST - Cultural Appropriation As Postcolonial Retaliation.

Mad Tea Party: Gonzo curating and beyond is convened by Aneta Rostkowska and Jakub Woynarowski.

Mad Tea Party is an afternoon of lectures, discussions and performances inspired by Lewis Caroll’s Alice in Wonderland. What happens when you – like Alice – were not invited to the table but still relentlessly want to participate in the conversation? Aneta Rostkowska and Jakub Woynarowski set up a sequence of unpredictable cultural exchanges following the method of gonzo-curating, a site-specific practice of constructing semi-fictional narratives inspired by Hunter Thompson’s digressive journalism. This time, gonzo curating will unfold in the location of Cologne’s Christuskirche. Departing from the similarity between the purified and minimalist interior of the Protestant church and the white cube of contemporary art the event will result in imaginary take-overs and re-imaginings of the location varying from an unusual guided tour, prepared in collaboration with the students of the DAI, to an exhibition created solely in the minds of the audience.

Words of welcome by

Ramon Haze's Cabinet presented by its deputies H. Feldmann and A. Grahl

The cabinet is the art collection of Ramon Haze and it has been investigated since October 1996. Ramon Haze is a figure living and working as an art-detective in the future cultural epoch that replaces the one we live in. As concerned with the preceding epoch (that is our own) he collects objects whose function he can no longer recognize and therefore classifies them as art. Read more

Presentation of the work of Yuri Albert: “Εἰκόνες, Imagines”

“Εἰκόνες, Imagines” of Yuri Albert (2008, LED display, about 5 hours) is an artwork that appropriates the text of Philostratus the Elder. “Imagines” is a description of 64 pictures in a Neapolitan gallery. Goethe, Welcker, Brunn, E. Bertrand and Helbig, among others, have held that the descriptions are of actually existing works of art, while Heyne and Friederichs deny this.

There are assumed political implications to appropriation and fiction as kin tactics of retaliation in Contemporary Art. The former is seen to neutralize the original, to undermine the art institution/canon, or to use history as a repository of material, etc. The talk attempts to unpack the terms and limits of these codes that underpin much Contemporary Art. It discusses the temporality of certain appropriation strategies (for example, that much appropriation is by default past-facing, or that appropriation has been reappropriated, inside and outside art), and asks if appropriation is always tied to fiction, and what are the conditions of that fiction when the author is already dead. Appropriation and fiction via jostling for subject positions and ‘alternate’ voices, is no longer sufficient to construct activities, either towards the ‘restoration of truth’, or towards the building of new strategies for art that wants to have implications.

In the performance two people interact by means of their voices trying to establish a ‘conversation’. Using different techniques of singing/fighting and communicating through sound, they move through the space sometimes chasing each other. The unusual encounter produces sometimes harmonious, sometimes cacophonic results. Slowly undressing the performers present layers of clothes revealing different aspects of culture and forms of disguises.

Focused on works by Robert Smithson, Giotto, and Mantegna, the video project “Fugitive Mirror”, a collaboration by Alexander Nagel and Amelia Saul, explores artworks as interruptions in the flow of animate and inanimate matter. Under the provisional conditions of the artistic intervention, death appears inside of life, and life inside of death.

Performance by Beth Collar: “This Is How I've Lived (but, the Mongol Hordes) Mark III : Redux“

Bringing together multiple voices and layering perspectives, from the overly personal to the cold analysis of the historian, the bombast of the cinema, or simply other people's writing, the performance This Is How I've Lived (but, the Mongol Hordes) Mark III : Redux  pivots around a period of time spent at an archeological dig. The work explores how media and fantasy interpenetrate and distort memory.

„We Aimed to be Amateurs“, book launch and film screening by Jan G. Lee* (Mirage), presented by Sebastian Cichocki and Łukasz Jastrubczak

The show features a dead person. The medium mumbles in a low, indistinct voice. She chews her fingernails and rumples her dirty apron. She pours hot wax into a dish of water. She spits at a mirror. She claps and strikes herself on the cheek with a deck of cards. The studio audience becomes bored and unable to summon up any enthusiasm for the old-fashioned performance. When the voice of the dead man is finally heard, it sounds weak and artificial. Read more

Admission is free. Lectures, talks and performances will be in English.

If you wish to join our communal dinner at 18:30, please be sure to make a reservation by early morning October 20, 2017 . Please contact Peter Sattler at peter@peterkristinn.com. Costs for food & wine: €10

As an infrastructure Planetary Campus is the container for several activities initiated by the DAI, key part is the Roaming Assembly, a recurring public symposium scheduled to take place once a month, functioning as it were as the DAI-week's 'centerfold' event. This state-of-the-art speculative and hybrid program explores contemporary themes and topics of relevance to the thinking of art in the world today.