2018 ~ Sunday January 21: Roaming Assembly#18 ~ Until The End Of The World And Back ~ curated by Galit Eilat and moderated by Nataša Ilić 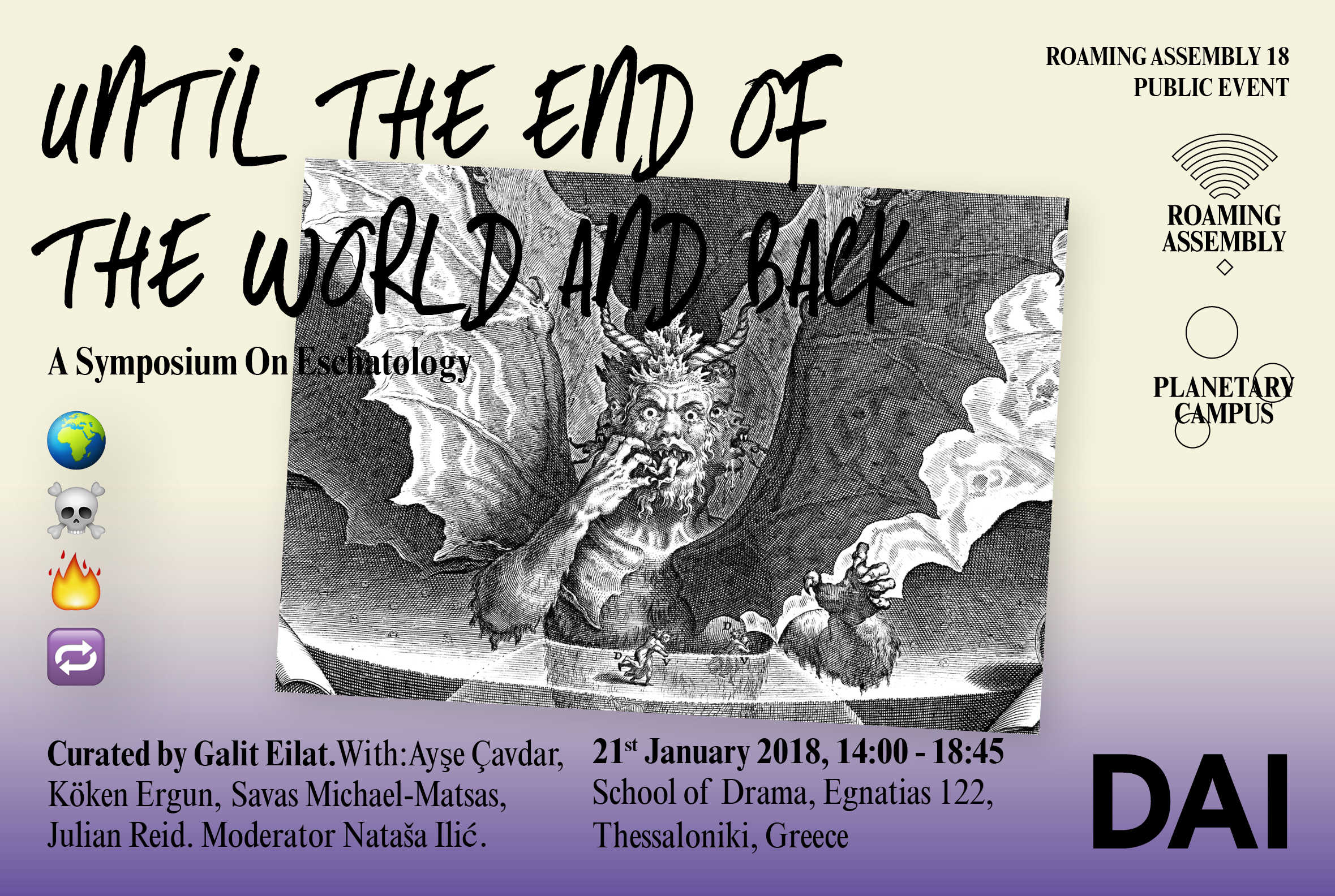 Dear comrades, friends and relations of the DAI,

In January DAI Roaming Academy, will land in the magnificent, ancient city of Thessaloniki. We are absolutely thrilled to invite you to join us there for our 18th Roaming Assembly: ‘Until the End of the World And Back’, a symposium on eschatology initiated and curated by Galit Eilat and moderated by Nataša Ilić, with contributions by:

The symposium, especially conceived for DAI's Planetary Campus, is part of Galit Eilat's wider research project entitled “Syndrome of the Present,” investigating sovereignty, present conflicts, and eschatological movements through the 17th century myth of Westphalia. "Syndrome of the Present" is supported by the Mondriaan Fund and the Foundation for Art Initiative.

Until The End Of The World And Back will be preceded by curated city-walks as part of the Planetary Campus: The Factory workshops on Saturday January 20 and followed by the involvement of Köken Ergun and Nataša Ilić, in the role of guest respondents to our Planetary Campus: The Kitchen student presentations, thus connecting Thessaloniki, researchers and students in an interactive way.

14:00-14:10: Introduction by Galit Eilat: On eschatology and Syndrome of the Present

“I, Soldier” is the first part of a video series dealing with the state-controlled ceremonies for the national days of the Turkish Republic. The nationalistic attributes attached to these large-scale ceremonies are underlined in a non-descriptive and almost voyeuristic point of view. ''I, Soldier'' was shot at the National Day for Youth and Sports, the day that marks the start of the independence war of the Turkish public under the leadership of Mustafa Kemal Atatürk against the Allied Forces back in 1919. The annual ceremony held at the biggest stadium of each city consists of figurative dances of high school students, choreographed in a timeless socialist-realist manner. In the last decade, popular songs have replaced the usual military marches, which accompanied the choreography. In this video a nationalist hip-hop song is played during the gymnastic demonstrations of the military school students, backed by a stern poem of a high-ranking soldier about the virtues of “The Soldier”.

In this lecture, Çavdar will discuss how the idea of apocalypse has emerged as a radical solution to the political crisis in Turkey. One of the pillars of Islam is the belief in the apocalypse and in life after death. Thanks to this pillar of believe, fantastic descriptions of hell and heaven came into existence, representing the idea of justice: non-believers go to hell, while believers can look forward to enjoy heaven. The problem for present and past believers in this pillar is as follows; before believers and non-believers take their way to their eternal non-places, the event of the apocalypse must take place. Until the apocalypse,  believers and nonbelievers alike have to go through terrible torture under the soil for their often minor sins. Thus, the apocalypse should occur soon in order to keep the time spend in the grave as short as possible. Hence, for a believer the apocalypse is not something to fear. It is the final step before arrival at the eternal address. Moreover, sometimes there are collective reasons to call for the apocalypse: political instability, economic crisis, corruption at the societal level, ethical dilemmas, unsolvable problems, grave injustices - in other words collective hopelessness. In these times, the idea of the apocalypse becomes a desire. While political and economic problems deepen, the individuals responsible for the crisis attain  legitimation and support by means of the idea of the upcoming apocalypse. In this way, leaders become not elected but chosen, to lead their people to their interminable address: heaven.

The Battle of Karbala was a military engagement that took place on 10 Muharram, 61 AH (October 10, 680) in Karbala, in present day Iraq, between the forces of Yazid I, the Umayyad caliph and Hussein, the grandson of prophet Muhammad. Hussein and his supporters were killed; women and children were taken as prisoners. This battle is central to Shi’a Muslim belief in which the martyrdom of Hussein is mourned by an annual commemoration, Ashura (Așura in Turkish).

Köken Ergun has worked in close collaboration with the Shiite inhabitants of Zeynebiye district in Istanbul, documenting their preparations for the ceremonies, which involves a mass theatre performance and the 'isolated weeping ritual' at the end of the Ashura day.

16:30-17:15: Lecture by Julian Reid: Confronting the Anthropocene: Movement, Eschatology and the Future

The Anthropocene describes the collapse of belief in the human capacity to secure itself from the threats and dangers it locates in its world, and the hysteria related to the sense of its endemic vulnerability. Confidence in the future is displaced by a fear for the coming end of the human. This is portended by a range of catastrophic events that are no longer perceived as possibilities, but as inevitabilities which the human must learn to accept, and adjust its expectations in accordance with. On the one hand the Anthropocene would seem to offer a radical break from the modern, a collapse of the modernist hubris which engendered the very practices that led to the predicament the human now finds itself in. But in other ways it can be seen to have been constitutive of modernity, as well as having deeper historical, philosophical, political and theological roots which lead us back to the origins of the West itself.

17:15-18:15: Panel discussion with all participants and the audience

19:00: Continue the conversation and join us for a cozy, communal diner at MAMASTAPER at Klisouras 11, Thessaloniki.

Admission is free. Lectures, talks will be in English, screenings with English subtitles.

If you wish to join our communal dinner at 19:00, please be sure to make a reservation by Friday, January 19. Reservations can be made via Peter Sattler at peter@peterkristinn.com. Costs for food & one glass of wine: €10 - payments (cash only) directly at the restaurant.

This edition of the Roaming Assembly is generously hosted by the School of Drama of the Aristotle University of Thessaloniki and will take place in the CLIO building: Egnatia 122, 546 22 in Thessaloniki. For further instructions, click here.

The Planetary Campus is an innovative conceptual space (without walls) where the MA curriculum "DAI Art Praxis" meets with a wide variety of external parties. A welcoming space where we want to host a fleeting, "affective community", where we generously share art and research, where complexity can be embraced and intellectual intra-actions are fostered, aiming to endow our praxes, wherever they are operational. As an infrastructure Planetary Campus is the container for several activities initiated by the DAI.

One of them is the Roaming  Assembly,  a recurring public symposium scheduled to take place once a month, functioning as it were as the DAI-week's 'centerfold' event. This state-of-the-art speculative and hybrid program explores specific themes and topics of contemporary relevance to the thinking of art in the world today.