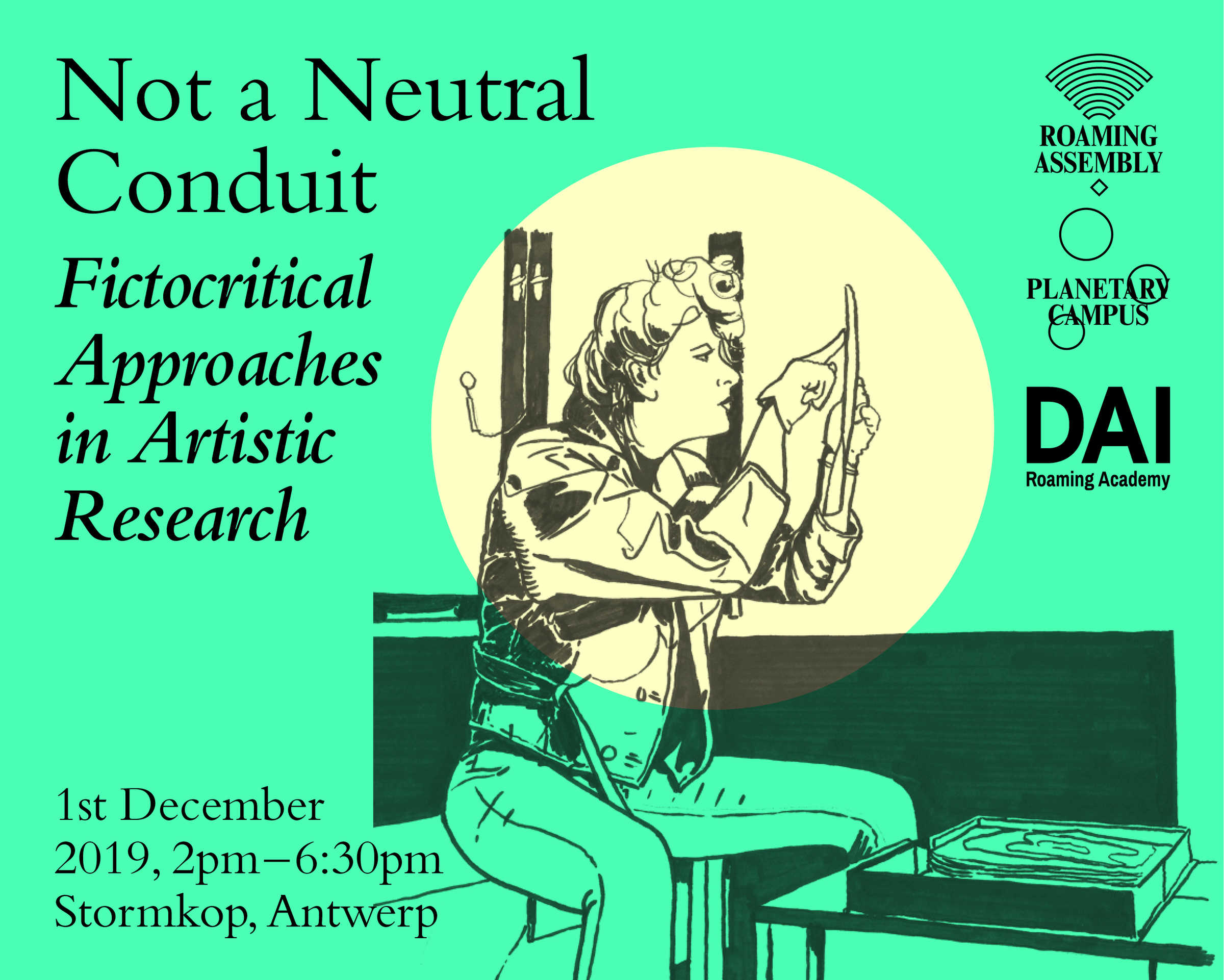 We are excited to invite you to join us at Stormkop, in the old harbour of Antwerp for our

this time convened by David Maroto upon the invitation of the Dutch Art Institute (DAI) to celebrate the awarding of his PhD from the Edinburgh College of Art in partnership with us, DAI, where he previously obtained his MFA in 2013.

(Scroll for Program and Practical Information)

Carl Rhodes defines fictocriticism as ‘a writing engaged in genre-bending as a literary and theoretical engagement with existence and selfhood’. In keeping with him, fictocriticism’s multidisciplinary approach seeks to ‘blur the boundaries between the fictional, the factual, and the theoretical’. Thus, fictocriticism ‘is methodological, but it is about blurring the traditional distinctions between style and content as well. The text not being a neutral conduit of meaning is central to the method and the object of research, in that sense.’

Our time, according to Rosalind Krauss, is characterised by a post-medium condition: the model of modernity that was anchored to notions of purity has become obsolete and the boundaries between disciplines are being increasingly erased. Indeed, in recent years there has been a turn in the visual arts towards narrative literature. In this context, a growing interest in experimental forms of creative criticism is producing a hybrid textual space where theory and practice, fiction and research, merge. From this viewpoint, it could be argued that a fictocritical approach would be perfectly suited to the creative spirit that animates contemporary artistic enquiry.

What can we learn from fictocriticism? How to employ writing as a research method? What can artists and scholars gain from using creative writing tools at the service of artistic research? How to retain cognitive value through the use of fiction? Can research be performed? These questions will serve as springboards for Not a Neutral Conduit: Fictocritical Approaches in Artistic Research – a unique opportunity for salient experts in various fields (fictocriticism, artistic research, art criticism, curatorial writing) to gather around an afternoon of discussion, performance, and a sharing of innovative methodologies across disciplines.

Throughout the previous academic year, David Maroto has been working with a group of DAI students in the Factory workshop ‘Beyond Fictocriticism’. The participants organised themselves in groups and identified content areas, which they critically explored by means of fiction writing. The resulting texts have been compiled in a ‘Reader on Stage’. Fictocritical writing entails a performative element that will be presented during the Roaming Assembly. Each text in the Reader on Stage will be enacted as an ‘Interlude’ by the students/authors, punctuating the guest speakers’ interventions.

Keynote by David Maroto: Not a Neutral Conduit

While the name ‘fictocriticism’ was coined at the fringes of the 1990s’ Canadian art scene, the in-between practice it designates kept evolving at the margins of the Australian academy, where combined creative writing and literary theory units encouraged artful experimentation with speaking positions critical of generic academic writing. This brief introduction focalises key strategic features of the fictocritical.

Barbara Browning: Wann erblickt man dich? (When can one see you?)

She’d been told that some young artists wanted to ask her about fictocriticism – what it means to construct a story out of one’s research on performance. But if they were curious about her, the feeling was, of course, mutual. She decided to perform a little research, and tell a little story.

Pablo Larios’s presentation will correlate assessments of current art criticism and art writing alongside a consideration of works of art in an age of accelerated image circulation.

The conversation will address the use of narrative fiction as a mediating device that situates the contemporary artistic experience from new curatorial con-texts. Marti and David will reflect on this question through the lens of their own practices, predicated on immersion, imagination, and identification rather than analytical distance.

Interlude V will take place throughout the duration of the Roaming Assembly.

Admission is free ~ but please join our facebook event. ~

If you wish to join our communal dinner at Stormkop around 18:30, please feel free to contact Nikos Doulos and make a reservation by Friday 29th of November.

If you want to receive the DAI's newsletter on a regular base (ultimately 12 x per year, never more) you are welcome to register here.