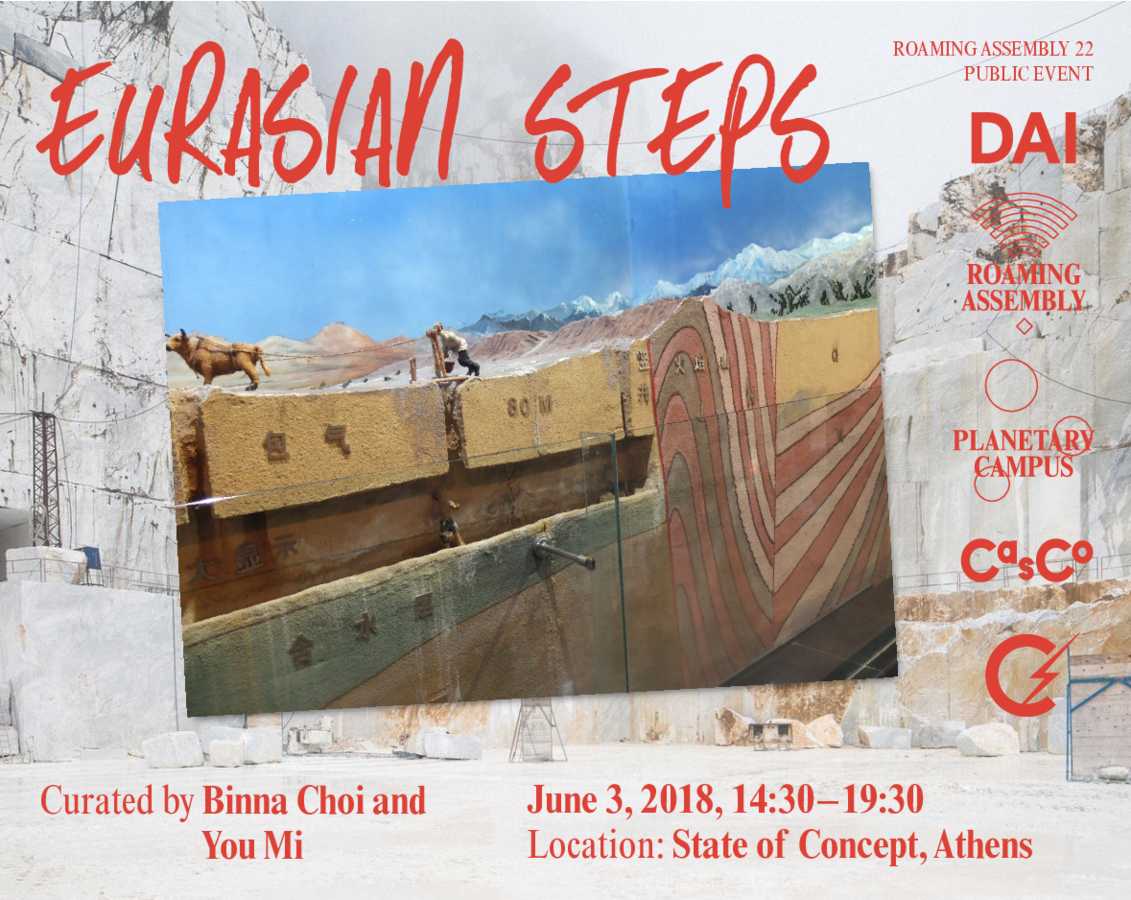 Sunday June 3 in Athens: DAI Planetary Campus and State of Concept warmly invite you to

which will be the first itinerant movement of Unmapping Eurasia, a long-term trans-cultural project initiated at Casco Art Institute: Working for the Commons.

Eurasian Steps in Athens focuses on (de-)constructing the city as a “Eurasian gateway”, from where the Hellenistic culture was spread from Europe to middle Eurasia, as well as serving as a node point for transcultural dialogues in various periods in history.

Curators: Binna Choi and You Mi

Xenia Kalpaktsoglou (The Laboratory for the Urban Commons)

Followed by a communal dinner by Options Foodlab to which you are warmly invited. If you wish to join, please send an email to Nikos Doulos (N.Doulos@artez.nl) on June 1st. Costs are 10 euro (dinner and a glass of wine) which can be paid in cash and on sight to Nikos.

(Between May 11 and July 2, 2018 DAI Roaming Academy and 'State of Concept' will merge programs. Beginning with the exhibition A Case Of Perpetual No of artist and DAI alumna Yota Ioannidou, a co-production. On the two days prior to Roaming Assembly#22 you are welcome to join us for COOP SUMMIT 2018, where seven study groups will meet the public at various locations in Athens.June 29, 30 and July 1 DAI presents 24 Graduation Acts at State of Concept.)

Unmapping Eurasia is a long-term trans-cultural project initiated at Casco Art Institute: Working for the Commons that approaches Eurasia as a broad yet non abstract field for commoning practice and take an itinerant approach by evolving in several itinerant movements along with other institutional and non-institutional partners on board to be co-initiators, researchers, and cartographers. Each movement involves several stopovers where encounters, studies, discoveries, speculation and imagination over other kinds of movements, institutions, infrastructures, resources, and culture take place in collective forms, becoming pathways that lead to and materialize as artworks, maps and/or texts.

Eurasian Steps is the first itinerant movement of Unmapping Eurasia, that takes a journey from Amsterdam via Athens to Seoul. While the name recalls the Great Steppe of Central Asia, known as the heart of Eurasia, it tries to deconstruct any centralism and assemble different narratives and methods in approaching Eurasia – hence the modest, initial step towards (un-)making Eurasia as a collective body.

Eurasian Steps continues in Seoul on 30 June in a form of “walking exhibition”, departing from the Nam June Paik Memorial House in Seoul. The first movement - Amsterdam - Athens  - Seoul - unfolds with support of the Dutch Art Institute's Planetary Campus, the Dutch Embassy in Seoul for its NEDxPO 2018 program, and Media City Seoul / Seoul Museum of Art.