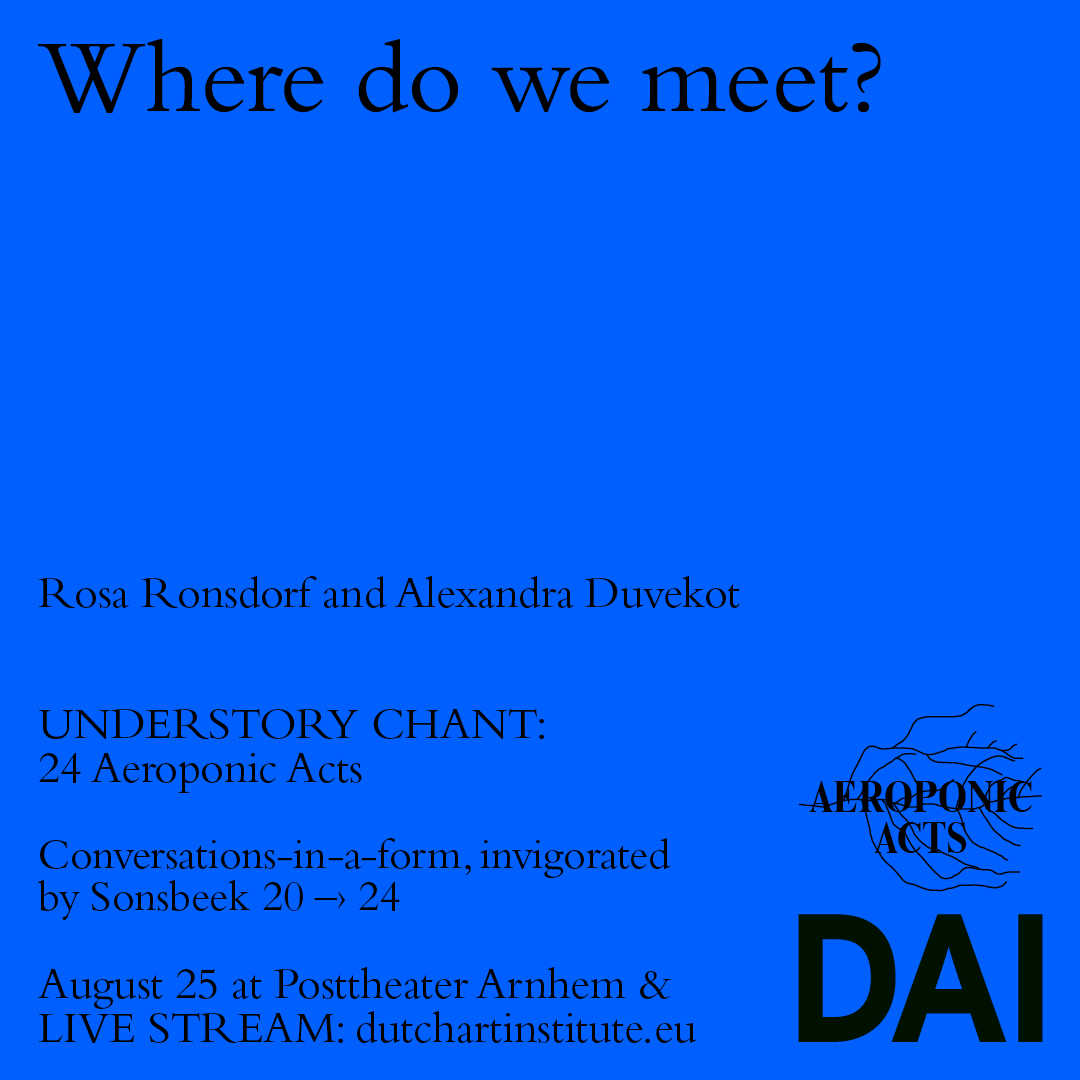 Aeroponic’ – root systems nourished by air – Acts is the name given to the nomadic Dutch Art Institute’s final Kitchen presentations. Each participant addresses one question, as a practice of engagement.

Here you will find the documentation of Alexandra Duvekot and Rosa Ronsdorf's presentation as filmed by Baha Görkem Yalım. The written report is by Harun Morisson and it includes a summary of the comments by esteemed guest respondents.

Alexandra and Rosa's question: Where do we meet?

Harun's report: The choir begins with the stirrings of a double bass, complimented by whirring wintry sounds, produced with a tape-delayed Korg MS20.

Their act raises a meta-question:  how to make inquiry through music in a visual arts context? Or what kind of inquiry is produced by music in this context? The ‘where do we meet’ is as much a question of intersecting disciplines as bodies. When the action that generated the sound has ceased we continue to hear it reverberating through the room. Lyrics similarly reverberate in our mind: ‘We lose our feathers mid-flight’. Or later in the song, La Mer, the refrain 'la mer a toujours raison'. “It means; the sea is always right;  but mer and mere, mother and sea have the same sound in French. So people hear what they want to hear.”

The performers’ meeting occurs in the air around them through syncopated chants. While their arrangement in a row also plays with the  typical  uniformity of a choir. In accordance with their name, Sonic Witch, the spoken word takes on an incantatory, spell-binding force: “A wave, a pitch, a herd, a haze / Back against the bird wall.”

Barby Asante: Very accomplished. The connections it made for me included ancient folk traditions; for example I’m thinking about the Keeners (who would cry and sing to inspire collective grief), women's voices coming together. There was something quietly celebratory. An assertion of histories of women in electronic music. It made me think about New Wave. Also invocation. . . less secular but more spiritual spaces. Almost as though you’re in a story sharing the micro gestures between you. How can you expand the performativity of what you're doing? Perhaps look for moments of disruption? When do we have these moments that are unexpected? Are there other ways of breaking the performance? What are the ways of bridging the visual and the sonic?

Momtaza Mehri: I'd echo that Barby. . Where would the performance take place? We began the day with Enya, and we’re haunted by the spectre of Enya. One of the lines that stuck out for me was  “we all lose our minds more than once”. I loved the inter-performance, the call-and-response within the performance. Taking time to listen with my eyes open and then closed had this enveloping effect. It could be really rewarding to push it further. I heard questions in your lyrics.

Lisette Lagnado: I felt you avoided the traps a choir can bring. . . fluidity came not only with the lyrics but the gestures. For me the whispering moments evoked Silvia Federici's essay “On the Meaning of Gossip”. How gossip between women can weave them a net of solidarity. Will the group continue or was it for this presentation? I especially liked the song Le Mer. It’s very feminine and I'm interested in listening more later.

Alexandra Duvekot and Rosa Ronsdorf's "Sonic Witch" was presented before live audience at the Posttheater in Arnhem on August 26th.