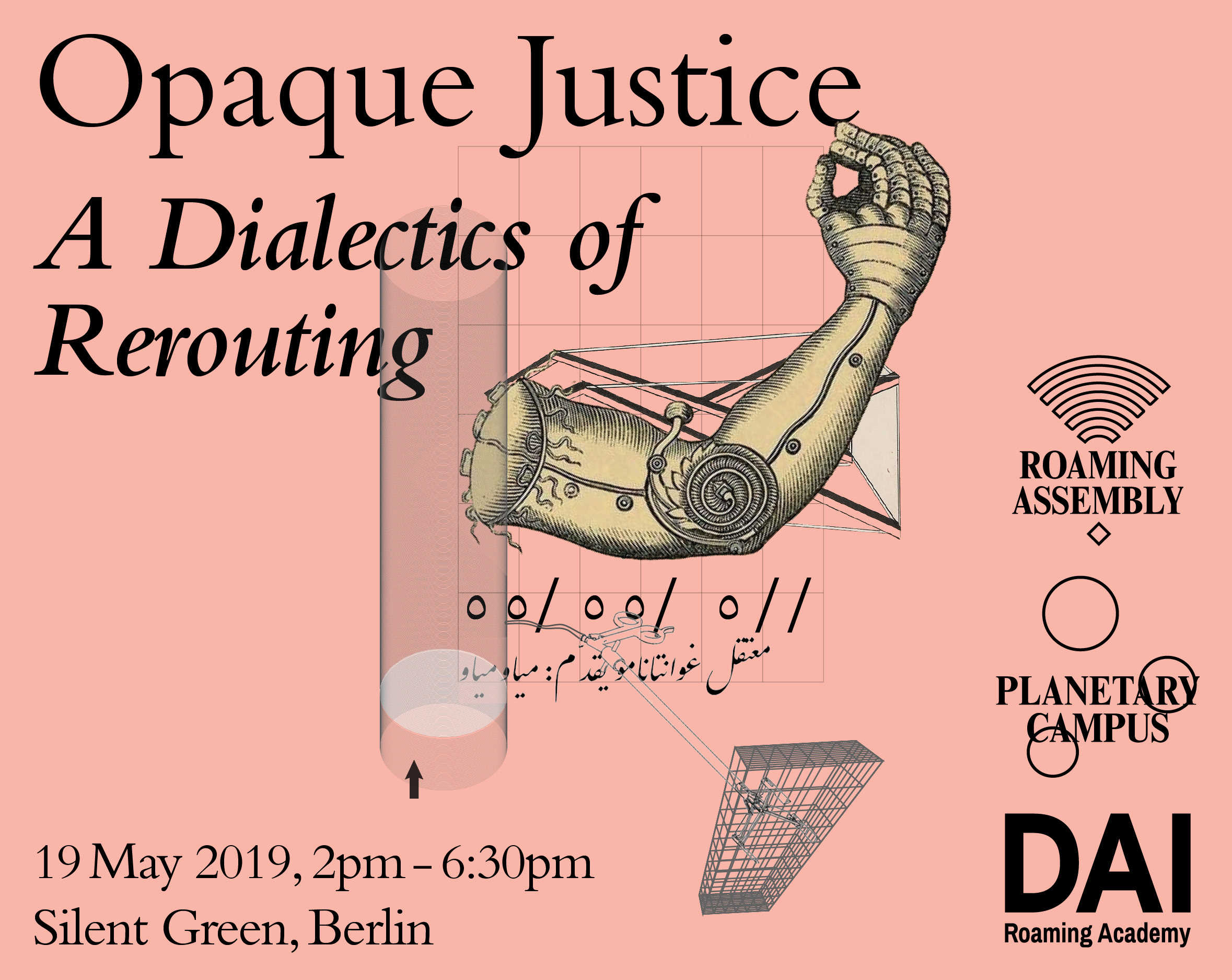 The contributors to what Rana Hamadeh calls the first edition of an extended series of conversations around issues of justice and desire, will be:

Opaque Justice: A dialectics of Rerouting both evokes and diverges from Édouard Glissant’s phrasing in his book Poetics of Relation (1990), to think of an ‘ethics of justice’ that is neither inscribed in, nor predicated upon, structures of property and ownership.
The series of conversations, which this assembly launches, depart from the premise that justice – under capitalism – can only be understood through the modality of measure:
The measure of to which conquest and possession are translatable; the degree to which the demand for transparency is dramatised and naturalised; and the scale to which the very means of ‘scaling’ are accessed. Contrary to this premise, Glissant’s concept of opacity suggests a radical detachment from the notions of scale and measurement. The symposium thereby, proposes opacity as a ‘field’ for rethinking the concept of justice on one hand, and the relations of justice and desire on the other.
For Glissant, opacity is the foundation of Relation that recognises the irreducibility of singularity into a universal model. To live in Relation – a disindividuated Relation – is to return to the opacities that “[…] produce every exception, [are] propelled by every divergence, and live […] with the reflected density of existences” (Glissant, 195). Glissant’s use of the word détournement, translated into English by translator Betsy Wing (1997) as ‘rerouting’ (rather than ‘detour’), invokes an incessant movement in search of Relation, or better say, a movement that is constantly manifesting itself of and in Relation. The translated term, ‘rerouting’, according to Wing, implies an active change of direction, but also a “turning away, or aside in a redirection of, or in refusal to direct attention” (Glissant, 212). When asking whether it is at all possible to desire justice differently, this notion of rerouting is picked up as a method of continuous concealment –  where the logics of capture never hold.

Burden as Kin is a two-part program with an opening intention and an essay. The opening intention evokes potential futurities of what this space of relational encounter could become when imagining the possibility of a life beyond entrenchment within a feedback loop of systematic justice, property, and debt while thinking through impacts of displacement.

On April 29, 2006, a twenty-foot boat was spotted off the south-eastern coast of Barbados. On board, eleven bodies were found by the coastguards, preserved and desiccated by the sun and salt water. The ghost ship was adrift for four months on the Atlantic Ocean. It set sail on Christmas day in Praia in the Cape Verde Islands, full of migrants from Senegal, Guinea Bissau, and Gambia, en route to the Canary Islands. Each of these men paid £890 for their place on the boat. Four months later the boat was found on the coast of Barbados.

This is an inadequate telling of this story that draws on the materials and tools at hand to make sense of the complicity of weather, ocean currents and state violence in the journey of this ship. Hovering between the film and the essay form is a questioning of the adequacy of the measuring of histories and affects connected to crossing, languages to make evident the materiality of the sea, and the both measurable and immeasurable horror contained in the figure of the ghost ship.

Burden as Kin is a two-part program with an opening intention and an essay. From a Haudenosaunee perspective, debt is reframed as gas-ha-ah or burden as understood through the story of the burden strap theorised by Jolene K. Rickard (1996). When we acknowledge that everything is alive and our relation to the world around are our kin, then materialisations of burden are also kin. How do we live with burden and what are our roles and responsibilities to each other within community-based reciprocity and obligation (Coulthard, 2014)?

Layal Ftouni’s talk explores the ways in which the boundaries between life and death are defined by a set of political relations (violence, discrimination, racism) that justify the violation of certain bodies through injury, debilitation, or even sacrifice. At stake in this discussion, is the question of who counts as human; whose lives are worthy of living or whose lives are disposable.
In light of these debates, the session critically addresses the recent turn in post-human theory towards affirmative ethics, an ethics that is grounded in a post-anthropocentric vision of the subject capable of overturning the most negative of affects and relations into joyful affirmation (Braidotti 2006, 2018).

The talk raises questions about the (im)possibility of this ethical stance in the death-worlds of settler colonialism. What possible new political imaginaries emerge from the threshold state of 'not-life' under the debilitating, and deadly conditions of biopolitical/necropolitical violence? Building on Hortense Spillers (1987) and Alexander Weheliye’s (2014) work, Ftouni asks, how do everyday strategies of survivability open up the space for imagining a life that refuses to be confined to legal and political adjudication of who gets to count as human today?

This talk begins with what Alessandra Raengo describes in Reification, Reanimation, and the Money of the Real as the "ontological scandal of slavery", or a logics that presupposes the reification of the black body as commodity. Raengo suggests that the black body's relation to capital is both operational, as well as discursive in that it reifies black alienation with each instance of black labor, 'each time blackness functions as the commodity form.'

Ramon Amaro wishes to build on this work to think through alienation as a means of production in the digital age, but more so as a process that is fundamentally mental as well as physical. His contribution draws on Gilbert Simondon's notion of psycho-physiological alienation to challenge the notion of black labour as purely economico-social. His ultimate aim is to liberate blackness from the status of psychic inferiority in favour of what he conceives of as the black technical relation.

Renée Ridgway's contribution to the event takes the shape of a lexicon that is set against the backdrop of two realms, one organized around (and organized into) Subjectivities of Search (black box) and the other around Agencies of Anonymity (black bloc).

The black box of Google’s proprietary search algorithm is centred around the concept of IP (Intellectual Property) through a ‘visibility management’. The black box: an opaque technological device for which only the inputs and outputs are known. As a ‘Personalised Subject’, Google targets users with advertisements that identify and categorise them, along with other criteria (search histories, cookies, geolocative data). The black bloc: a tactic of anonymization and massification often associated with the direct action wing of the left. As an ‘Anonymous User’, Tor (The Onion Router) does not reveal the identity of the user because of the layers of encryption. Somehow these two things come together near the end of the twentieth century. Is there a reason for this?(Alexander Galloway 2010:3).

Contribution by DAI's Justice Economy: The Dramaturgy of Debt and Indebtedness Factory participants

Following their collective close-reading of a number of texts that engaged questions surrounding concepts of justice, debt, memory and translation, the Justice Economy factory participants accumulated together an extended lexicon of key-words that ranged from ‘demand’ to ‘derivative’, ‘property’ to ‘performance’, ‘subjectivity’ to ‘spectatorship’, ‘representation’ to ‘repatriation’ to ‘reproduction’ etc. This resulted in three dining tables covered with post-it notes. Taking their key words as instinctual starting points, they participated in a vocal choreographic exercise, throwing their words back and forth until a complicated theoretical song emerged. Following on from these experiments in sound and meaning, they each drafted statements that built on the linguistic foundations they had constructed. Their statements met each other in cohesion and contestation, developing and re-developing themselves and their neighbours. They continued to delve further into the performative possibilities that the statements offered, ringing them dry in their attempts at lubricative methodologies.

The development of a group lexicon and the questions posed under the umbrella of the “Justice Economy: The Dramaturgy of Debt and Indebtedness” group resonated with the participants’ personal and public lives as roaming students from a multitude of different contexts. Thus they ask themselves in an ongoing spiral: Where are you not breathing? What could/would a space for breathing look like?

Meeting You In The Margins by WALTER books:

Marginalia, the act of writing in the margins, has been practiced by multitudes of readers, continuously disrupting the singular hierarchy of the author as authority. Perhaps defacing books in their status of sanctity while simultaneously keeping them alive, by “planting impressions on the verge” and leaving traces of enthusiasm, of disagreement, of confusion, of boredom, of embodiment. The margins can be approached as a site of relation, a place of contact between readers where thinking becomes conjectural, disorganized and mobile.

WALTER books, a bookshop intent on being a library, invites you to take a book, to add your own writings in the margins and to send it back as the first additions to our library, where it will be sent out to other readers.

Admission is free ~ but please join our facebook event. ~

If you wish to join our communal dinner around 19:00, please feel free to contact Nikos Doulos and  make a reservation before Friday,  17 May. Dinner costs: 10,00 euros (to be settled by cash on spot).

One of them is the Roaming  Assembly, a recurring public symposium scheduled to take place four to five times per year, functioning as it were as the DAI-week's 'centerfold' event. This state-of-the-art speculative and hybrid program explores specific themes and topics of contemporary relevance to the thinking of art in the world today.

If you want to receive the DAI's newsletter on a regular base (no worries, not more than a few times per year) you are welcome to register here.

DAI Roaming Academy is empowered by the graduate school of the