Hannah O’Flynn: On the Possibilities of Late Night Cacophonies (The Bar, or the Kitchen?) 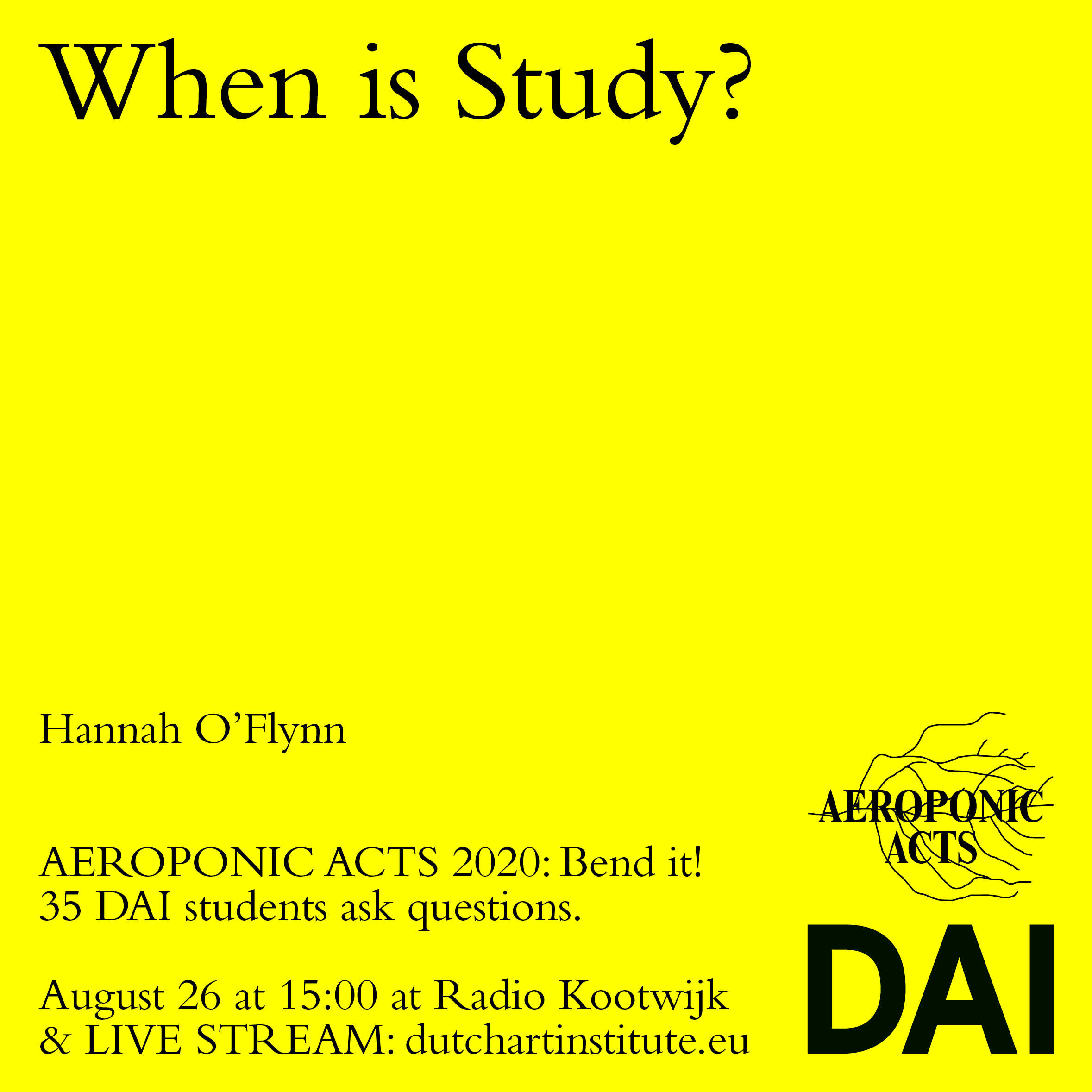 Here you will find the documentation of Hannah O'Flynn's presentation as filmed by Baha Görkem Yalım. The written report is by Bethany Crawford and it includes a summary of the comments by esteemed guest respondents.

On the Possibilities of Late Night Cacophonies (The Bar, or the Kitchen?)

Intro: I here want to show deep gratitude and acknowledgement to all the ones who have created that slippery place that is late night DAI. Welcome to the bar, the fridges are open once again.

Ana Teixeira Pinto, Amal Alhaag, and Adam Szymczyk responded to the question When is Study?

The audience are invited to the other side of the room where a table is set up with drinks and cards with cocktail names. O’Flynn contextualizes the DAI practice of the ‘bar’ as the space for late-night discussions that play a fundamental role in informing the practice and learning here, which she thinks a lot of people need just now (they do). There is a music station set up and the audiences are invited to play whatever they want in the same system of the ‘bar’. A menu details the different cocktails with further texts: ‘On the possibilities of late-night cacophonies: Is it the bar or the kitchen?’ O’Flynn uses her presentation time to perform a moment of recognition with the informal systems and infrastructures that run below and concurrently with formal institutions. The audience mingle, drink, dance, discuss and reflect in a collective sentiment of nostalgia and appreciation of the ‘bar’ tradition, and O’Flynn’s optimal timing to honour it: ‘When looking back at these two, long, eventful years, I come to think that this is where, to me, practice really hides itself, difficult to measure.’

Amal Alhaag was thankful for the work of the performance in providing a break and thought it was quite nice that she brought forward the question of when is study. It answers itself, because it is of course in these places. She asked how we can speak of the club or the bar, when there’s a lot of work considering these spaces as sites of organization, the club and bar as sites of knowledge sharing, and for survival for a lot of queer, trans and illegalized people to come together. It’s a place of hierarchy – a place of the capitalist – although sometimes subversive. She loves to do messy dj-ing and radio dj-ing ,and as a person who doesn’t drink alcohol, said it’s a very interesting place to be in a late-night moment that you remember you’re always the sober one, particularly when wildly dancing and people assume you’re on some other kind of drug. She recognizes that these spaces re-energize us and found it pertinent that we are currently mourning this kind of space and gathering. She mentioned the book Two Thousand Seasons (1973) by Ayi Kwei Armah and giving and receiving within that, noting that the bar and the club are exactly that, saying that a nice glimpse of this was shared.

These spaces are interesting because of who they include, said Ana Teixeira Pinto, as inclusion is always predicated on exclusion. It’s always tied to a certain kind of code, like an immaterial code of coolness, or an attitude and a posture. She sees it from the perspective of humour and informal ways of forming communities, how a group forms a shared sense of identity, always demarcating itself against something. This isn’t necessarily a negative, she said, and they can be inclined in many directions.

Adam Szymczyk mentioned the book Neighbours: The Destruction of the Jewish Community in Jedwabne, Poland (2002), a collection of stories reconstructing what happened there during 1941 when a whole town was burned, where co-villagers were responsible for killing their Jewish neighbours. A resulting discussion among Polish historians saw the more right-wing say ‘you don’t write history in bars’ as a way to delegitimize these narratives. Szymczyk reflected that when none of the documents exist there are only the memories, which are highly biased but can reconstruct the history. He said the idea of ‘prisoners of correct history’ made him question who defines correct history, concluding that this kind of history can be defined by what is written in bars.

Hannah O’Flynn's AEROPONIC ACT On the Possibilities of Late Night Cacophonies (The Bar, or the Kitchen?) was presented at Radio Kootwijk.