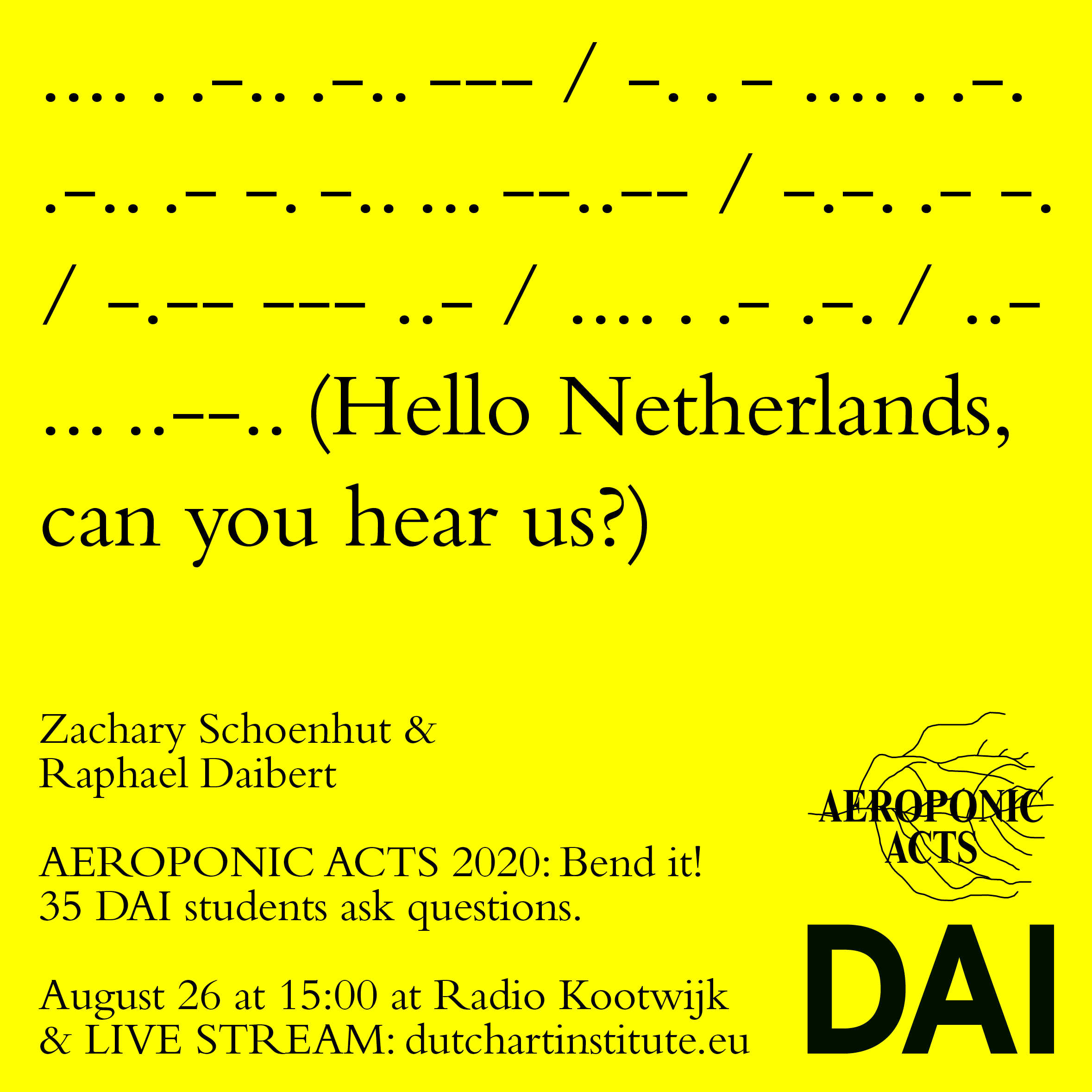 Here you will find the documentation of Simon(e) van Saarloos's presentation as filmed by Baha Görkem Yalım. followed  by a written report, authored by  Bethany Crawford, which includes a summary of the spoken comments by esteemed guest respondents Flavia Dzodan, Amit S. Rai, and Adam Szymczyk.

Raphael & Zachary's introduction: Multiplicity of Resonant Disruption is a sound installation in 2 acts considering the insurrectionary force of sounds, voices, and reverberating forms of communication of trans and queer individuals across the world.

Radio Kootwijk served the Dutch government in the management and continued colonization of Indonesia vis-a-vis sound and radio waves. The radio transmitter directly implemented Western technologies of communication and control, strengthening the colonial presence throughout Southeast Asia. Quite literally, the first statement that was ever transmitted via radio waves from Radio Kootwijk was “Hello Bandung, do you hear me?” by Queen Mother Emma in 1929. Immediately, Indonesia was subjugated by a foreign entity through the resounding interpolation of the singular pronoun “me.” On the information website for the Radio Kootwijk, it is noted that the surroundings were chosen for “undisturbed connections.” These surroundings and the colonial history that it holds must be punctured and interrupted, fully unmasked and interrogated.

In Act I: Cacophony, the multitude of sonic vibrations form a language of refusal that amplify the marginalized sonic-activist archives of Brazilian artist Mavi Veloso remixed with morse code and sounds of our personal archives. The sonic interplay ruptures the architectural and historical silencing of the space. Mavi’s work includes a multiplicity of transgender women voices from across time and space: Octavia Saint Laurent, Bambola Star Kaxinawá, Lorenza Böttner, Venus Xtravaganza, Pepper Labeija, Jennifer Laude, and others. In Mavi’s own words, “when the conventions try to silence us, we cheat. When tradition tries to do harm, we fight. When violence insists on hurting, we resist.”

Multiplicity of Resonant Disruption is a sound installation in 2 acts considering the insurrectionary force of sounds, voices, and reverberating forms of communication of trans and queer individuals across the world. Radio Kootwijk served the Dutch government in the management and continued colonization of Indonesia vis-a-vis sound and radio waves. The radio transmitter directly implemented Western technologies of communication and control, strengthening the colonial presence throughout Southeast Asia.

In Act II: Envelopment, the stories of Phillipino trans-activist, artist and filmmaker Ram Botero become sonic agents in problematizing and interrupting colonial narrativity and the simplification of modern racist grammar through the sharing of pre-colonial mythologies that register in ephemerality a her-story/his-story of alternative modes of communication, marginalized connections and living in-spite-of.

Bethany's report: The sound work interrogates the colonial use of sound as soft power in response to Radio Kootwijk’s ongoing historical function as a colonial communication tool. Morse code is transmuted into a multi-tonal beat to make way for an evocative soundscape featuring bird calls, conjuring a tropical landscape. The sonic-activist archives of Brazilian artist Mavi Veloso that includes transgender women voices from across time and space – Octavia Saint Laurent, Bambola Star Kaxinawá, Lorenza Böttner, Venus Xtravaganza, Pepper Labeija and Jennifer Laude – are remixed with the morse code and other samples. The resulting vocal tapestry layers languages and narratives, demanding active listening in co-producing meanings. Here the sonic realm is a place for resistance that transcends language, subverting the roles of transmitter and receiver historically attached to Radio Kootwijk. The sensuality of the multiple voices and enunciations inverts the singular, authoritarian and objective voice traditionally associated with the establishment in an intervention bookended with archival nature sounds of the ‘other’ place to end on reflection as a final rupture in a space of constant production.

Flavia Dzodan congratulated Daibert and Schoenhut on their presentation. At the beginning of the Cold War, she said, ‘number stations’ held by governments broadcast encrypted communication. Someone on the receiving end had the only decryption pad. To this day no number station broadcast has been decrypted, making it one of the most secure forms of communication. One station famously opened each broadcast with a folklore song, she added. What she liked about number stations is that only one person could understand the message, knowledge she gleaned from growing up playing with a short-wave radio. In this sound composition, with its morse code and queer conversations, she heard the decrypted code of queer liberation, speaking to people as if they held the decryption pad – requiring a kind of decryption and which she enjoyed very much.

Amit S. Rai really enjoyed the presentation that questioned the sound of colonial command and the subaltern life worlds. Decoloniziation through hybridity led him to ask what beat beneath the command, which he was very excited to think through with hybridity as a form of colonial resistance. Sound is not just used as a metaphor, when we forget how to act, but to bring an intensive difference of sound in the experience of power, he said. Concerning the difference between colonizer and colonized, he thought of the Tower of Babel and cacophony in relation to resonance. He added that the latter brings the body back in amazing ways, how it is the process of listening, the sound as a material and durational force in which the body is implicated, sometimes even unconsciously but from which a strategy can emerge as a source of resistance.

Ana Teixeira Pinto referred back to the phrase, ‘hello Bandung can you hear me’, the first sentence elicited from Radio Kootwijk that the artists note in their abstract, and how the very basis of the study of information theory is that the information is a form of command. The presentation reminded her of this trope of the armchair anthropologist who says things like: ‘We have no way to know if they can hear us?’ She added that coding and decoding do not need to occur in the same frequency, which she thought is how postcolonial theory spoke back to information theory and deconstructed this narrative between sender and receiver. What’s received on the other end is not necessarily what was intended to be coded, she said, mentioning how the work’s conflicting voices address the attempt to Astroturf over the idea of a master narrative, or to script or to code in relation to one.

Bethany's report: As the audience enters the room a sonic collage of chirping birds and other natural sounds is interweaved with meditative beats. Daibert familiarizes us with the context of the work, reading a text displayed on the screen with the stories of Filipino artist Ram Botero. The morse code leitmotif, recognizable from the first installation of the presentation, introduces the sounds of a stringed instrument playing local folk music that leads into Botero’s storytelling: fragments of myths conveyed as important inheritances of indigenous knowledge on the intricacies and complexities of ‘the collective consciousness that forms when we are born into this world of meaningful symbols’. She tells of the colonial oppression of trans and queer histories, highlighting the essential role of myths and oral histories for people to trace the genealogies of queer stories, ‘vital in the quest for self-determination’. She traces the violent legacy of colonialism in obliterating and demonizing indigenous knowledge, replacing it with destructive practices: from the extraction of the land to chemicalization in the notion of cleanliness. The narration concludes with a call to lay siege to colonialism, to enact resistance through existence and joy, and by ‘telling our own stories, the different stories’.

Having listened to Act One yesterday, Amal Alhaag said it had been really wonderful to experience Act Two as a parallel narration of different positions and responses to spatial colonial reality. In the process of curating the September Roaming Assembly with colleagues from Sonsbeek, she said she was thinking about unravelling Radio Kootwijk and its colonial history. Botero’s amazing storytelling brought her to think through world literature and storytelling as different forms of collecting and disseminating knowledge and keeping archives. Throughout she thought about how cultures have had a multiplicity of gender identities beyond the Westerner’s gender binary, which made her question how this was perpetuated in Christianity and how this has reshaped kinship. She referred to the moment detailing Miss Philippines’ responses in the Miss World beauty pageant claiming the relationship between America and the Philippines had been a beneficial one. This made her think about describing being in a good relationship when one speaks about colonialism, a campaign phrase, and how so much is said in that small phrase. ‘How doesn’t one speak about this loaded and horrific complicated past?’, she asked. In this collaboration a different voice is centralized, which she said was a really wonderful way to let the voice take up space. She thought this work was a wonderful example of what Dzodan said yesterday on how art contributes to emancipatory work. It was a wonderful to experience, for the listener, she said, in a passive way, the experience of the third collaborator.

Adam Szymczyk had the impression that this sound work was something between a lullaby and a revolutionary anthem, that there was something in it about a collapse of the sonic intervention as a very mellow form of sonic journey to faraway lands. He found it highly evocative of images unseen that attempt to evoke a physical location relating to a geography or space but also in this larger space of the myth. If you replace proletarians with trans and queer individuals and take a revolutionary anthem, this becomes a question of methodology or strategy, he said. He brought up how Rosa Luxembourg points to that which needs to be done and how you can build a genealogy for a future change; he questioned stepping out of the safety of the institution to institute change. The narrative highlighted how current conditions are not changing in any interesting direction, he said, asking, for all of us, how do we make that step? How do we move towards a proposition?

Raphael Daibert and Zachary Schoenhut's Multiplicity of Resonant Disruption – Act I: Cacophony will be live-streamed from Radio Kootwijk.