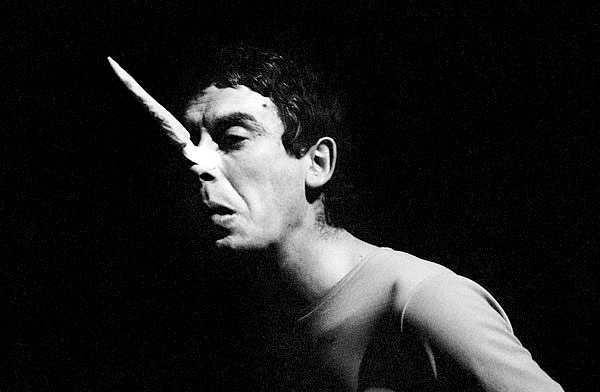 Curator: Sara Giannini for If I Can't Dance I Don't Want To Be Part Of Your Revolution

‘It is not just about getting out of the phrastic: we must paralyze the action,

reaching what I like to call "the act”. While the action is something historical,

linked to projectuality, the act is forgetfulness:

in order to act, it is necessary to forget, otherwise you cannot act.

In this respect a word like actor needs to be totally reformulated.

While with actor it is usually meant he who advances the action,

holding out his voice to the character, I move in the opposite direction.

I go towards the act, namely the establishment of void.

We have to reach the unconscious, what is not known, the oblivion of oneself.’

This COOP study group takes as a starting point the disrupted legacy of the Italian actor, director, writer, philosopher and pop figure Carmelo Bene (1937 – 2002) to constitute a year-long trajectory of betrayal in 9 acts.

Despite being considered one of the key players of Italy’s post-war experimental theatre and cinema, Bene’s multifaceted performance and philosophical practice is today suspended in a halo of dismissal and hagiography. Almost unknown to an international audience, his rich production was never translated into English. Furthermore, due to complex family disputes, his archive is inaccessible and most of his theatre production lost.  For “a foreigner in his own tongue” who preached obscenity (off-scenity), oblivion, and incomprehension, this seems to be his most faithful afterlife.

In Italian the word betrayal (tradire) is very close to the word translation (tradurre), an adjacent sound, a leap back into the slip of the tongue. This tactical contamination of desire and words becomes an unintentional disclosure, a score of nine different performative modes through the year. If tradurre is tradire –to translate is to betray– what happens if the original language is itself unknown, erased, or unavailable as is the case of Bene’s archive and theatre production? If with live art the aporia of memory is always a concern, how can one remember that which is lost?

As a consequence the gesture of betrayal and translation of a practice in different tongues is of vital importance. Translation as an attitude on the stage of the self/s will become a road companion and each COOP session is conceived as a possible score to be constructed, forgotten, and enacted in time.

This practice-based COOP proposes an unfaithful reception of the controversial legacy of Carmelo Bene to address current concerns of:

* The (im)memoriality of live art

The study group therefore does not have a historiographical drive, nor does it aim to glorify Bene in the history of performance art. It will rather look at Bene’s absence from the field of performance studies as a proposal for a different hermeneutics, one that is delayed, embodied and situated. Even if Bene was distant from feminist concerns of his time, can one approach Bene’s anti-essentialist writings from a feminist and genderqueer perspective? How does his critique of representation connect to elements of general performance marked by social media? How does non-identity relate to the rise of new identitarian sovereign movements across Europe and the United States?

The immemorial body of Bene becomes the space into which this study group will attempt at a collective performative exegesis.

It is the COOP’s intention to read Bene’s complex and untranslated work vis à vis different artists and theorists that provide affine or challenging views on his practice. His philosophy of the “actorial machine” will be approached through lenses of performance art, opening up performance theory to an epistemology of the South. Inspired by Bene’s own definition of “reading as an act of oblivion,” the class sees readership as a performative act of rewriting, re-gendering, remaking, and re-enacting.

METHODOLOGY AND OUTCOME: A RECURSIVE STRUCTURE

The DAI’s 9-week temporality is turned into 9 acts of betrayal, purposely blurring the distinction between reception and production. As if in a fractal organism, the June presentation will incorporate 9 acts by 9 students which will have already happened and which will in fact begin during the presentation in October.

To this end this study group will pay close attention to the “scoring” of each act, using documentation as another act of betrayal, fictionalization and appropriation. The score/documentation can take on different forms (image, video, audio, text, costume, body prosthesis…) and the study group will focus on the creation of scores intended both as mnemonic traces and future-making dispositives. The scoring will be done in between DAI weeks.

Under the guidance of its tutors and invited guests, the acts will include workshops, screenings, readings, visits to sites and archives during the COOP’s extension days in Berlin and Sardinia, and different student-led betrayal sessions.

Next to Sara’s research on Bene and performance epistemologies from the magic south, Arnisa will bring forward practices where the body and the self resist being understood as an event quickly consumed, thinking about how the body can become a performative score and archive. Geo will lead students through a series of cumulative theater workshops based in a sonic investigation of the “trash self” or “remnant self” in relation to group identity, visibility, and cultural norms.

This COOP is looking for students who are interested in performance practices, orality, sound-scapes, who are concerned about identity normativity, the “hashtagation” of language, (self)representation, who are curious about all that which can become a language.