Upon Us All Equally ~ a marathon of statements for the future ~ with DAI tutors Maria Berrios and Antonia Majaca amongst other. When: 7-9 November 2019. Where: the National Dance Centre in Bucharest. 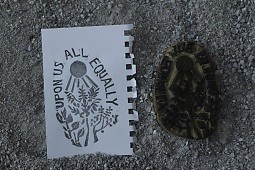 Upon Us All Equally is an event organised by tranzit.org platform, which is trying to describe auspices for a more optimistic future, by producing a collective statement on how long-term thinking and commitment can help create this future.

By organizing such an event tranzit is stating the power of a collective, multi-centred and trans-national organism that for almost two decades has generated communities, values, revaluations, criteria, networks of friendship and trust, energy and enthusiasm. We are embedded in a context that has witnessed hopes in many versions of a “better future”. The now from which we are speaking is common to many across the world and particularly the art world; the here, however, is more defined and contains the historical references and seeds for lucidity necessary to provide a standing point from which the future can be imagined in more pragmatic and more equitable ways.

The core of the event consists in a marathon of statements, lectures, performances, interventions, dialogues, with around 25 participants. Together they will look at questions such as: what are the visions of the future and who are the people to offer them? Artists, theorists, scientists, journalists, are they better fortunetellers today? Can they still predict more than lament? Can they instigate the energy of hope rather than the depression of the inevitable doom? Can they still be realists without turning cynics? Is there a need for a future at all or we are better off with the daily drugs of consumption?

In the 25th hour it is not too late to imagine there are still things we could do in order for humanity to survive for longer than the immediate present – humanity understood not as a species but as society, with collective aspirations, shared values and coexistence of beliefs.