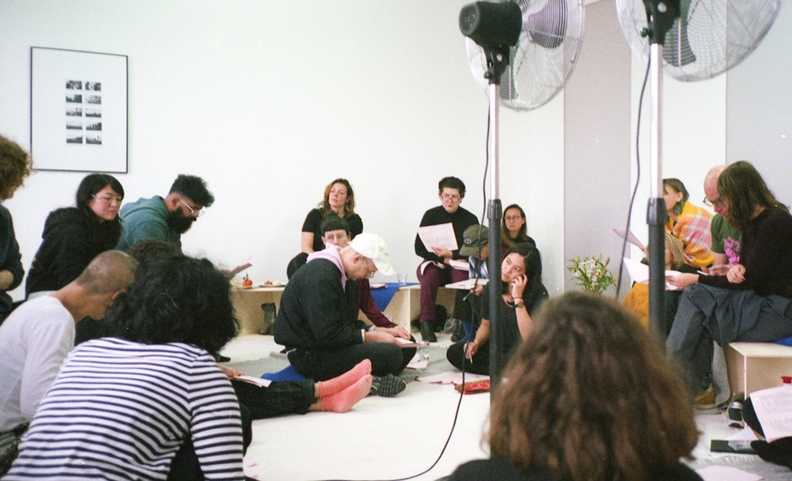 Spread out over six days, the Summer Academy includes a series of three workshops hosted by an international selection of tutors. In this first edition of the Summer Academy, the focus throughout will be the dynamics of a group as a way of being, working and generating knowledge together. In addition to the workshops, the Summer Academy will include presentations and events on selected evenings, which are free and open to the public.

The Summer Academy will be held in two locations: Hordaland kunstsenter, located in a historic school building in the city center of Bergen, as well as in a functionalist villa at The Nordic Artists' Centre in Dale, a few hours outside the city.

Elise Carron (France) graduated from the School of Art in Annecy. She regularly associates with other artists to create projects that activate shared ephemeral situations. In 2015, she launched MARSEILLE LOCAL BUSINESS with the artist Richard John Jones. In the same year, with Anne Lise Le Gac she started the festival of performances / trust OKAY CONFIANCE.

In her work, Elise Carron brings together objects, performance and installation with a distinct interest in the concept of meeting and process. The development of sculptural forms also manifests itself in the culinary dimension, in the history of know-how that is familiar, unfamiliar or forgotten. From preparation to tasting, Elise Carron extends an invitation to share collective moments and choreography in specially conceived settings. Cooking in clay crust, a broth infused with parmesan crusts for risotto, smoked chicken suspended from a basketball hoop, a revisited swing structure in a medieval spit roast.

The installations are created from already-existing elements, common-sense of forms destined for the kitchen.

Ina Hagen (Norway) is an artist and writer based in Oslo. Her work explores layers of mediation between audiences, artwork and artists, in order to create instances of collective, critical reflection. She explores this through performative situations and platforms for social thinking. Hagen has been running one such platform; Louise Dany, together with artist Daisuke Kosugi, from their home and adjacent store-front since 2016. She writes regularly for the Scandinavian online art journal kunstkritikk.no, and is the deputy chair of the young artist’s membership organization and contemporary art institution, UKS (Young Artist’s Society). Hagen has exhibited at: INCA, Seattle (Solo); Kunsthall Charlottenborg, Copenhagen; Podium, Oslo, among others. Residencies include: Capacete, Rio de Janeiro (2018); BAR Project, Barcelona (2017); Quartier 21, MuseumsQuartier, Vienna (2015). Upcoming exhibitions include the tenth Momentum biennale in Moss, Norway (The Emotional Exhibition, 2019) and INDEX – The Swedish Contemporary Art Foundation, Stockholm.

The Entangled Readers (Netherlands/ Australia) practice ways in which text and language might resonate with, and be digested by, the bodies present in the room. The Entangled Readers approach reading as a collective, dialogical, and full body activity. By engaging sensorial methodologies with critical thinking they attempt to become receptive to the knowledge present on the page, under our skin and within the spaces between. The Entangled Readers explore what tools and conditions might assist us to think through current political climates and open up space for alternative socialities and imaginaries to emerge.

The Entangled Readers is initiated by artists Zoë Scoglio and Lucie Draai, acting as a point of connection and opening up of their practices and research. Hordaland kunstsenter’s Summer Academy will be its fifth moment, with previous sessions at Shimmer (Rotterdam), and Hot Wheels Projects (Athens) as part of the Dutch Art Institute and Van Abbemuseum COOP Academy. During this time a slow collective reading of Oswald de Andrade’s ‘The Manifesto Antropofago’ (The Cannibalist Manifesto) was undertaken, along with Denise Ferreira Da Silva’s text ‘On Difference Without Separability’.