Artists, curators, and thinkers (Tirdad Zolghadr and Galit Eilat a.o.) present diverse interventions that widen the discourse about the “give and take” economy of the contemporary art system. ‘Transpositions’: a series of multifaceted events manifested through oftentimes overlapping and contracted axes and relations. 22nd and 23rd of November @ W139 during the Amsterdam Art Weekend 2018. 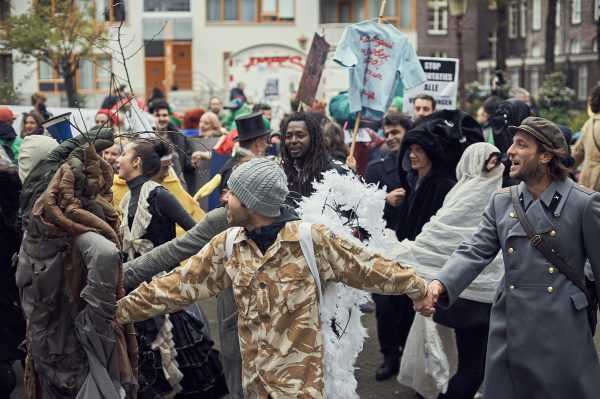 The relations between cultural funds, art institutions, artists, curators, art workers in general and audiences have always been overlapping and synaptic. Whereas each of these actors are positioned differently on the power scale and also regularly shift power dynamics, each one gives and takes from the other, in a dynamic system essential to art circulation.

Discussing the topic of reciprocity dynamics in the contemporary art system; the first day will focus on the subject of cultural binaries and power manifested through a performance by the German Israeli artist Thalia Hoffmann and Palestinian actor Morad Hassan. The second day will roam around several related sub-inquiries, including modalities of socio-political art engagement in relation to geographic and economic urgencies, the possibilities of authorship in collaborative artmaking, curatorial practice between hope and despair, decolonial practices in and outside of art institutional frameworks, and the many contradictions between that which contemporary art states and what it actually does.

Socio-economic changes in the past decades led to urgent conversations about funding policies and institutional tendencies of seeking new means of production, engagement, and audiences. This constellation brings to the fore several important questions: How do different contemporary art practices simulate cultural, socio-political and economic urgencies? And how are they perceived and discussed within the circles of artists, curators, institutions and audiences?

‘Interior Parts’ is a performance inspired by a short story by Robert Walser. Over an increasingly intense twenty minutes, Palestinian actor Morad Hassan recounts his life story to German Israeli artist Thalia Hoffman. Meanwhile, she feeds him interior parts of a lamb, which she carves and prepares on stage in front of him. The more Hassan eats, the less informative his story becomes, until he is left with the anonymous identity of an ordinary citizen.

The performance will evolve into a conversation between Galit Eilat, Prof. Frans-Willem Korsten, La Cocina, and the artists. The talk will focus on the cultural binaries and power dynamics manifested through the performance, on feeding as a socio-political simulation, and on trans-cultural collaborations within artmaking

A constellation of talks, lectures, and a video screening

This lecture discusses socio-political urgencies and art engagement in conflict geographies, as well as the politics of funding cultural production in such contexts. How are both notions perceived amongst domestic and foreign (Western) audiences?

The film involves five people and three locations and roams around the different subjects and forms of knowledge that originate from them. These range from urban tensions, such as unresolved events unfolding during the 2011 London riots, music, and the personal ways in which each of the protagonists relates to ideas of the political.

Gluklya will present fragments of her ongoing project called “Carnival of the oppressed feelings” and will touch upon relevant inquiries regarding socially engaged art practices, fair labour and work ethics.

In his book Traction and other writings, Tirdad Zolghadr argues that ‘Contemporary art is defined by a moral economy of indeterminacy that allows curators and artists to imagine themselves on the other side of power. This self-positioning, in turn, leaves us politically bankrupt, intellectually stagnant, and aesthetically predictable.’

This conversation will focus on the position of power within contemporary artistic and curatorial practices. Zolghadr will be thinking through the contradictions between that which contemporary art states and what it inadvertently does, to learn and foster modalities of engagement that challenge power structures rather than contribute to it.