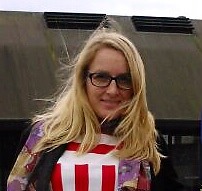 Rieke Vos (b. 1981, The Netherlands) is a curator living in Amsterdam. Her interest unfolds around the borders of art, architecture and urban life, where she feels constantly driven by a search for poetry in the everyday.

In 2014 she initiated a program around sports and art that highlights the potential of play and improvisation in an efficiency-driven society. She also works on a program around the 65-year legacy of the Sonsbeek open air exhibitions in Arnhem program. In 2013 she was research-curator for the Istanbul Biennale and co-curator the exhibition Artificial Amsterdam that took place at de Appel arts centre (i.c.w. Gerardo Mosquera). She was participant of de Appel Curatorial Programme in the years 2010 and 2011. From 2011 – 2012 she worked as a curator for SKOR | Foundation for Art and Public Space and from 2008 – 2010 she developed several research and curatorial projects for the architecture firm Powerhouse Company in Amsterdam. Rieke studied Art History and Architecture Theory at the University of Amsterdam and the Freie Universität in Berlin.