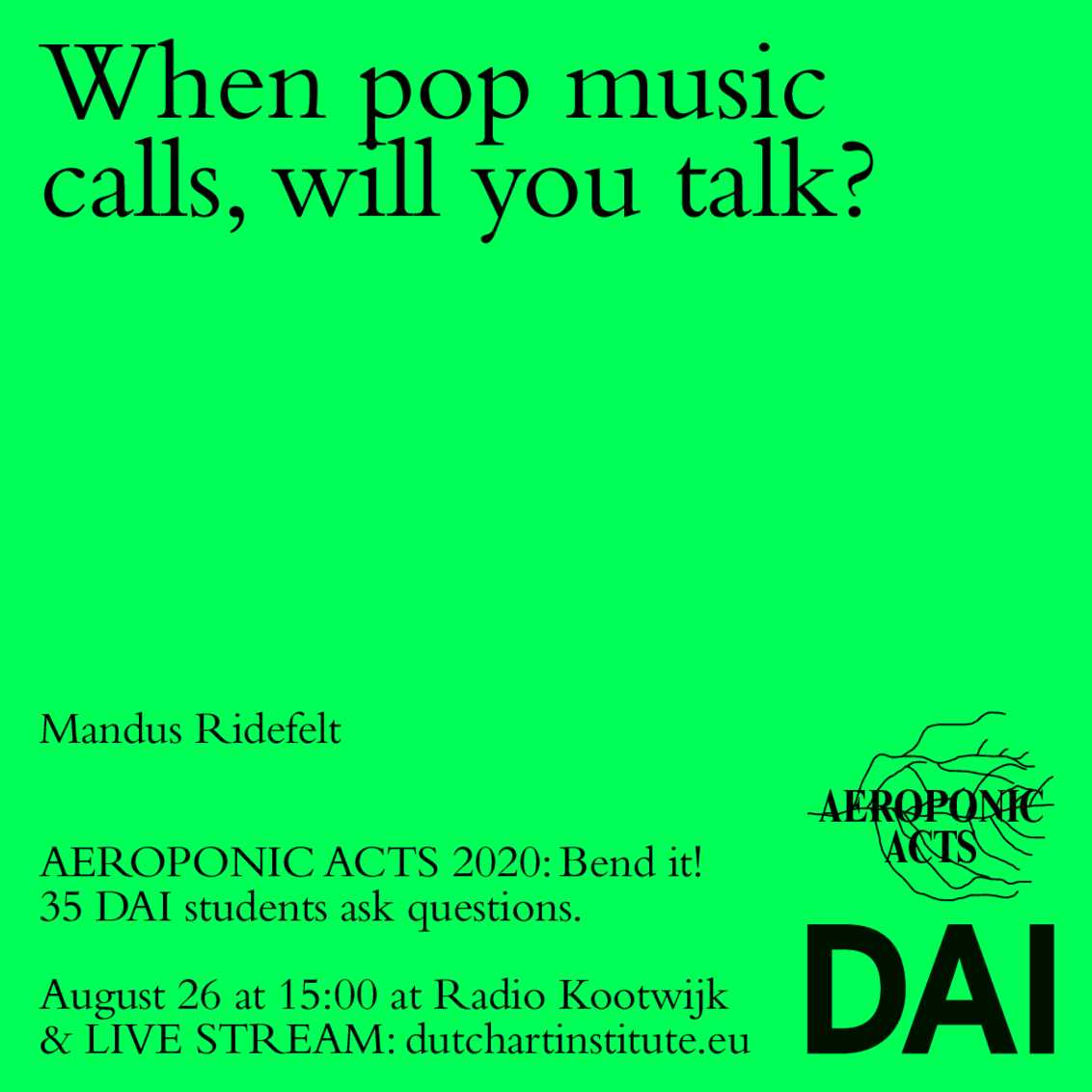 Here you will find the documentation of Mandus Ridefelt's presentation as filmed by Baha Görkem Yalım. The written report is by Bethany Crawford and it includes a summary of the comments by esteemed guest respondents.

Mandus's introduction: Just as Eurydice, pop music is content to live in death. But for those who prefer life, those who thrive on their separation, pop music must be bailed out by the emotions of a listener. It must borrow the tokens of live subjectivity.

Bethany's report: Ridefelt reads a text that is presented on dual screens, punctuated with the sound of renditions of a looped pop song in various pitches and speeds, ‘really, really, really nice’. The text navigates ‘the call’ as communicative by means such as telephone and divine. If the call is always encoded with a message that demands decoding, how can one think through answering ‘beyond the legitimization of the call and it’s encoding’? By way of the myth of Orpheus and Eurydice, the text posits that every pop song is a call, faithless until faith is restored in co-production with the listener: ‘It is in this way that the pop song is always lesser than itself. It is too bland, too repetitive to pass as expressive on its own and in need of the listener, yearning to be heard. The pop song calls for the listener to lend a piece of their finitude. The pop song is an invitation to supplant the inert technological capture with a piece of your heart.’

Flavia Dzodan was interested in how the artist elaborated on these pop sensibilities through a technology that’s on its way out and in how he talks about pop music as a faithful artefact. She found this an interesting metaphor: What would our culture look like if we had temporary gods rather than the fixed gods of the Abrahamic tradition? Religious affiliations would then lose their meaning, she said. What does it mean to worship a god that exists for a week? In the performance the artist stipulates that pop music is a form of divinity that requires worship. Dzodan was intrigued by this ephemeral form of divinity rather than divinity as fixed in points across generations.

The writing reminded Ana Teixeira Pinto of Bernard Stiegler. Through the technologies that enable love demonstrated in the work, love is only possible if the object is not present, she said, which made her think of an interview with Marshall McLuhan in which he asserted his belief that pop was possible because English language lends itself to this kind of verse. The interviewer turned to the African American piano player, the only non-white person in the room, and asked him what he thought and then he made the connection between pop and enslavement, the hip hop tradition, which was a by far more interesting argument than McLuhan’s.

Adam Szymczyk liked the idea of voice in the context of gods and how the artist mentioned it was a form of seduction, although Eurydice refuses so it doesn’t really work. He thought this seduction by music and voice was interesting to think through the function of text that render these impossible interpretations. In philosophy, he said, it is no longer about telling the truth but presenting an impossible narration on reality, which we can choose, and which has a certain power over us. The text had many exits, which he said would hopefully lead to question of the rituals of criticality, which he thinks are filling us to the brim by leaving a contamination, a new form of orthodoxy in the current system of knowledge production.