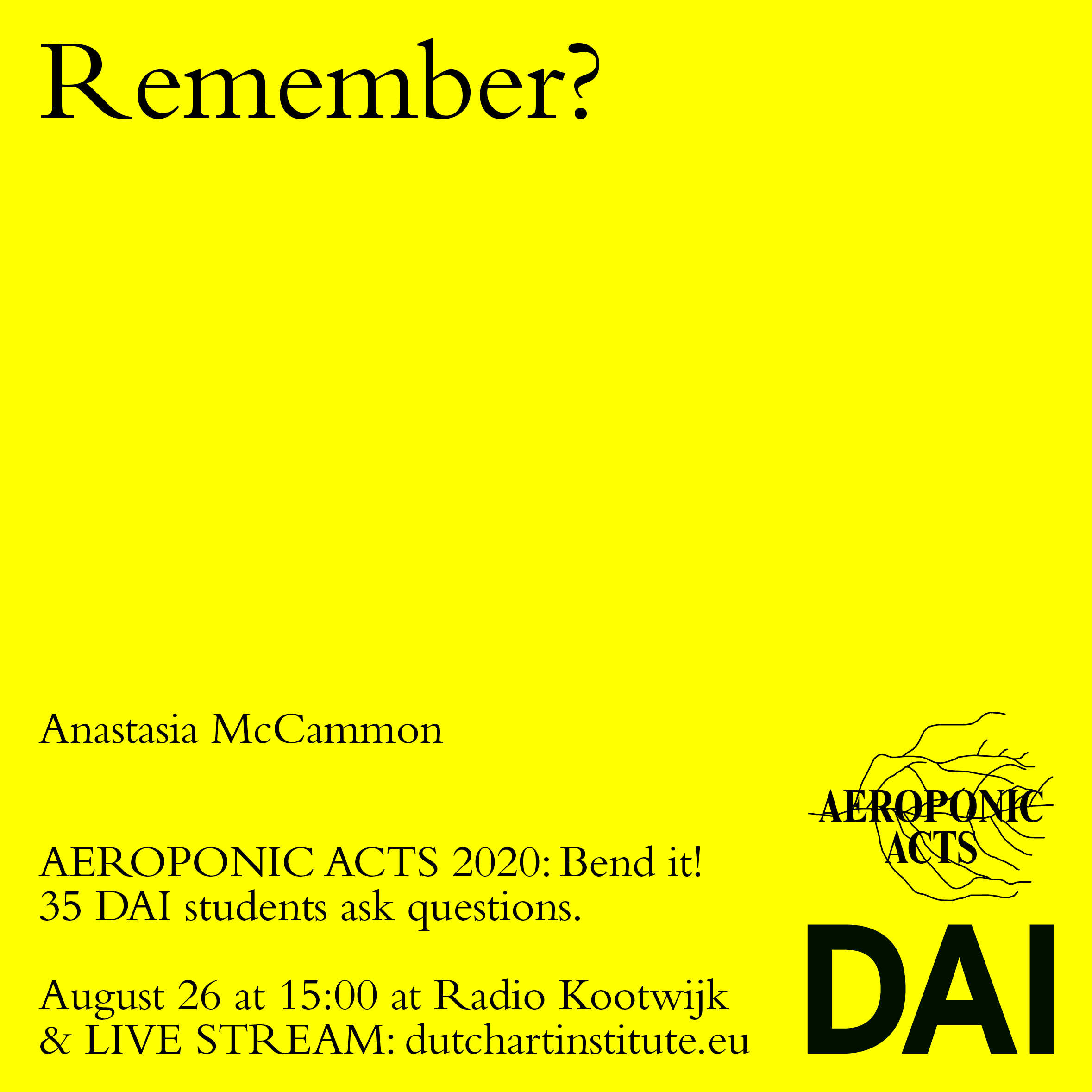 Here you will find the documentation of Anastasia McGammon's presentation as filmed by Baha Görkem Yalım, followed  by a written report, authored by  Bethany Crawford, which includes a summary of the spoken comments by esteemed guest respondents Flavia Dzodan, Amit S. Rai, and Adam Szymczyk.

This Archive is A Dreeeeeam!

Can fragments, fictions, dreams, snippets, colours, characters, repetitions and sounds work as an archive, conjuring a memory from this place called home?

The work is based on a collection of interviews from a week in Polystipos, a village in Cyprus, focusing on the period of British colonial rule on the Island.

Bethany's report: McGammon wears a beige overcoat and introduces the audience to a ‘memory device’, comically presenting a box labelled ‘the archive’ as a way to ‘re-remember to remember how you remember’ activated using a four-step process: the question, the collection, the translation, the activation. She playfully introduces an experiment of her having to remember ‘home’ by returning to her home village of Polystipos in Cyprus. A myth of sleeplessness haunts her village, she says, where everyone is in a constant state of awareness and dreams can’t be recalled, leading to her proposal of the archive in helping them to remember. A moving-image component articulates the four-step process, with images of the village and a soundtrack of its ambience. The final step in the process, the activation, involves a physical embodiment, where the audience can repeat her actions, beginning with a series of claps and then joining her in a large moving circle mimicking her gestures and movements. The transmission of these gestures are interpreted, reinterpreted and translated in multiple actions within the audience as active co-performers, transmitters and receptive nodes in a larger signification system.

Ana Teixeira Pinto reflected on memory, its meaning as a property, or ephemeral property, in relation to how tourists collect memories as curiosities. The animal spirit as a theory of consciousness, your mood as a common experience of the community rather than privatized, connected to her thoughts on the industry of the psyche. She thought the artist activated collective mood through rhythm and sensory experience, with walking as a type of collectivity that departs from private consciousness or psychic experience. She noted that the territory of the island functioned as a proxy for the colonial enterprise and retained the old presence of colonial presences.

Adam Szymczyk was curious about the collection of interviews in the village, which he assumed were in the archive, whose opaqueness he liked saying the best archives are those that haven’t been opened in a long time. Most of the research done on post-War art in places like Uzbekistan used the former KGB archive, which systemically archived information, he said. When this archive was opened it was expanded with the memories of the people. He noted how in the performance the activation seemed to be an archive of gestures, hand signs and body movements and was unsure about the simple lack of coherency – not a bad thing in itself – that he recognized as an eclectic mix of motivational or scientific research presentations and the way the mood changed from the joyful distancing present. He wondered how the different ways of looking at the subject came together yet found it exhilarating to make sense of the eclecticism. He also wondered why the archive was at the centre and when it would be activated, noting the importance of mentioning the content since the village could be anywhere and that he was interested in the specific archive of one a week in her village.

Amal Alhaag found it was quite a lot to process. ‘Why the archive?’ she asked, at the same time interested in the theatrical form of storytelling and use of satire. She thought about the potential of humour that could have been traced and worked more. She really liked that the archive kept losing importance and on the other hand wondered after this relation, asking: ‘Is the island an archive, the collective memory, the gestures, and the combination of the movement? Can we pass on memories in the moment? How we are trained to pass on memories?’ She noted that memories are partially gossip and can change into something else. As so much has been written about islands in relation to space, she wanted to rethink whether the relationship is one of land and water being in close proximity to your own presence with reference to island culture. For her there were a lot of thoughts of what to remember and why to remember. She found that the question was worth sitting with: whether the satirical, theatrical or messy telling is worth telling, as mess is a generative space.

Anastasia McCammon's This Archive is A Dreeeeeam! was presented at Radio Kootwijk.