Risa Horn: we stand cool before a million oceans 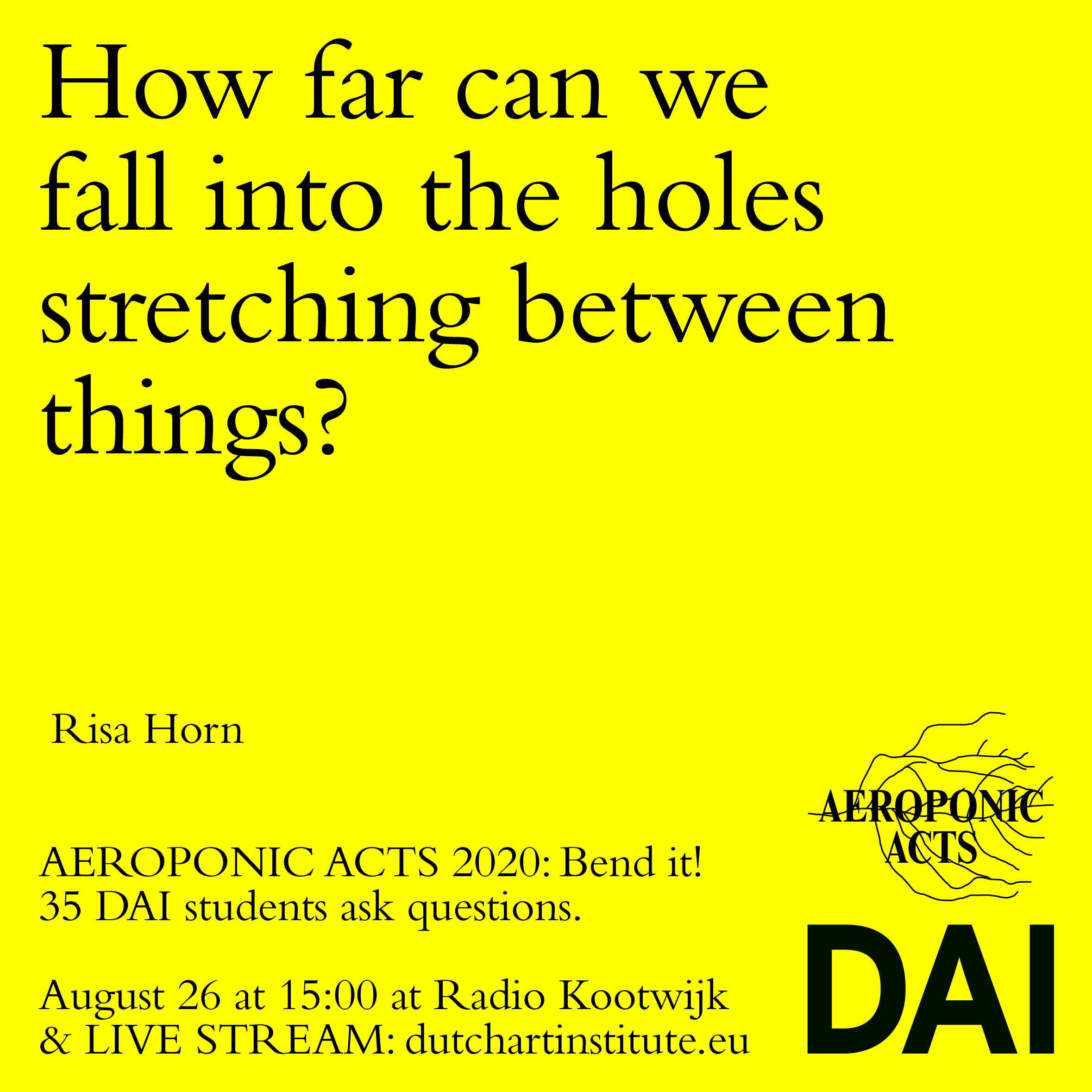 Here you will find the documentation of Risa Horn's presentation as filmed by Baha Görkem Yalım. The written report is by Bethany Crawford and it includes a summary of the comments by esteemed guest respondents.

we stand cool before a million oceans

How far can we fall into the holes stretching between things?

A respected neuroscientist recently published that texturally, tofu might be a good human brain alternative for hungry zombies.

Considering the human brain as a block of tofu wired with electrical networks facilitates a margin of distance from the certainty of knowing and modernity’s universal spaciotemporal complex, with its conception of subalterity. Time is leaking everywhere in the interminable suspension of waiting.

Amit S. Rai, Ana Teixeira Pinto, and Adam Szymczyk responded to the question How far can we fall into the holes stretching between things?

The audience are invited outside to the small pond area at the entrance of Radio Kootwijk and given tea lights to hold. The building is a contrasting backdrop for the performer who enters barefoot, wearing a golden metallic sarong and an orange swimming costume. She holds a large notebook and thanks Peter and Ricardo for maintaining the event live stream, and how touched she was to hear that her mum had used it to watch the presentations. She consults her notebook through which she calls family and discusses the weather and complications calling via different technologies. She puts on long waterproof fishing dungarees and instructs the audience to count as the water falls from her mouth and a watering can, to count the droplets with a ‘creative counting because we are not really going anywhere’. The audience then follows her around the pond as she plays Rick Astley’s ‘Hold Me in Your Arms’ and ties one end of a rubber rope to a pole and the other around her waist. She tries to move forward returning to unravel the rope more to get as close to the other side as possible. Despite the exertion, she never quite makes it. After exhausting the possibilities, she returns to call her mum via the notebook, telling her ‘she tried’. Her mum tells her she’s proud of her and they say goodbye.

Amit S. Rai wrote about zombies and tofu brains in his notes, and really loved her multi-coloured costume at the outset. He found her use of communication technology shed light on what it means to care for each other and push capacities to communicate to the limit in a performance that wonderfully dramatized the role of exhaustion. He observed that the counting involved communication between two numbers: the cardinal numerical numbers and the ordinal empty numbers, which he thought was awesome. He also appreciated the struggle with the elastic, the breaking point, when care reaches a certain limit.

When Ana Teixeira Pinto saw Horn getting ready, she thought she wore a mermaid tail, which gave her this figurative image that actually materialized in the performance because the artist did come outside in this Esther Williams type outfit. It was a perfect conflation of these two trajectories in film history, she said, that mirror each other but were never really brought together: the imperialism of the building having something of Leni Riefenstahl and the musical tradition in which Williams starred. She read the stretching of the elastic in relation to a universal gesture towards a human that one wants to believe is elastic and just needs to be stretched to the point that it can include or accommodate all these different identities. She noted the deep flaws in this concept as Western philosophy, particularly in Kant, was never meant to accommodate everyone. She enjoyed the intimacy with family and short-circuiting of this, the performative femininity and the context of intimacy within femaleness.

Adam Szymczyk thought about weight and found it very striking, believing any form of art includes an element of chance and risk, the essence of showing something. Sharing something in public is a risk, something may have meaning but not necessarily translatable to the viewer. He realized the only reason she was doing it was because she wanted to give it to the others, so there was a duality in the fear of being exposed and the want to show something that is very profoundly yours. He referred to how the artist’s question told us there are holes between the things, which could infer sculpture and made him think of megaliths and reaching into the depths. The marine world costumes having to do with the annihilation of the depths through props and costumes, were efficient, he said, as in the minimal setting the sequins had a big effect.