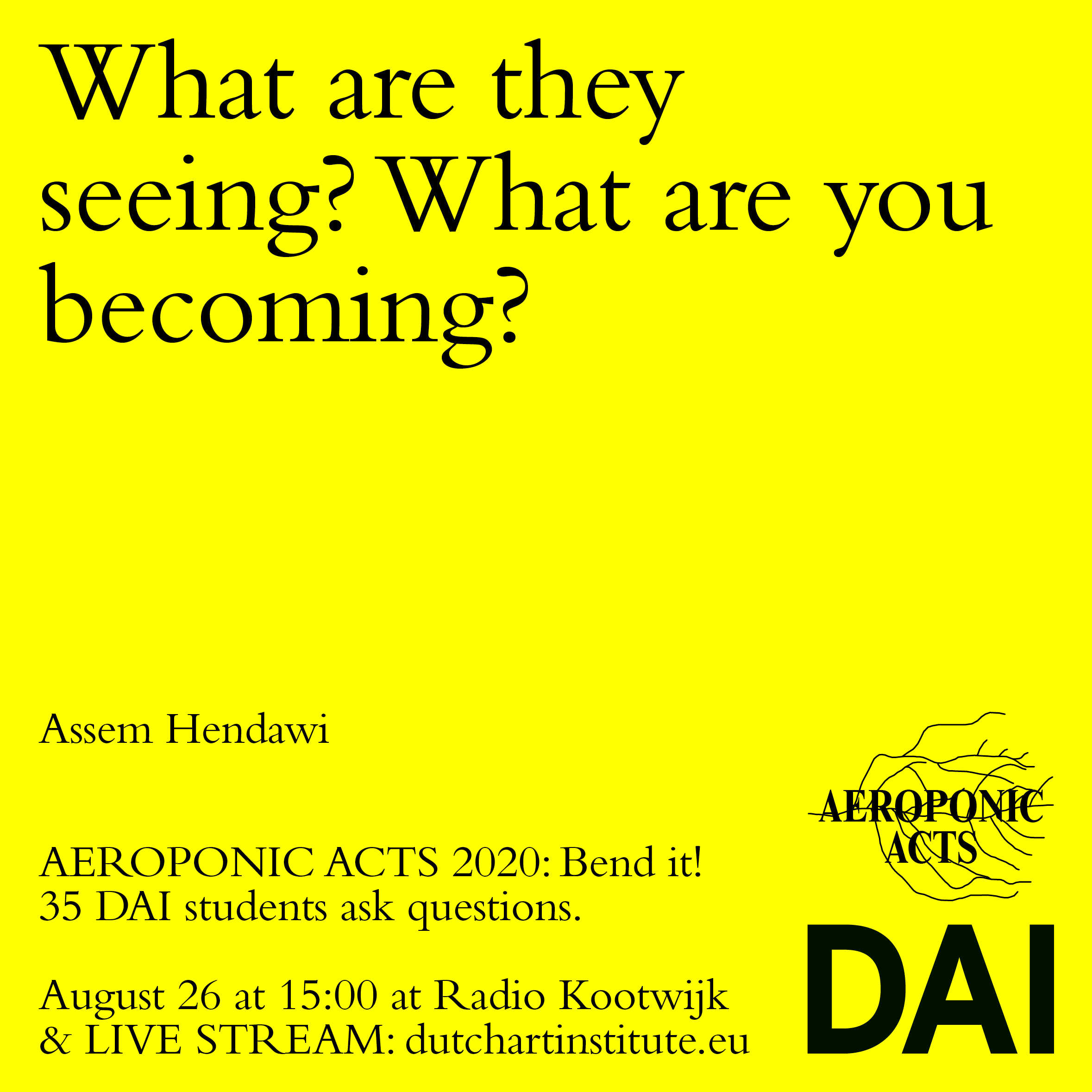 Here you will find the documentation of Assem A. Hendawi's presentation as filmed by Baha Görkem Yalım. The written report is by Bethany Crawford and it includes a summary of the comments by esteemed guest respondents.

Intro: This video is not about Black Lives Matter, or Beirut Explosion, Kanye West or Space Exploration. This video is about a fly. Follow the fly.

Flavia Dzodan, Ana Teixeira Pinto, and Adam Szymczyk responded to the question What are they seeing? What are you becoming?

Hendawi presents a moving-image work with chaotically collaged archival images of current events and equally discordant soundtrack and spoken text. The layering of images, heavy with effects, induces an oversaturation and distortion of information. The images are projected directly onto the performer, overpowering his image and distorting the representation of his self among the pictures of the events in a reproduction of our surreal hyper-mediated reality. Themes around Elon Musk, Kanye West and the Beirut explosion are punctuated with visual and sonic references to a fly. Hendawi repeatedly states: ‘it’s not human, it’s posthuman’, in a text oriented towards the schizophrenic nature of the attention economy and subliminal messages, challenging how we can maintain subjectivity and agency in this assault of media, information and global violence.

Ana Teixeira Pinto reminded her of the film The Fly (1986) and found the premise of extracting information from DNA transported by telecommunication and reproduced interesting, noting the problem is that you would have to destroy the original unless you wanted multiple copies of yourself. She found Elon Musk as protagonist extraordinary given this company produces and employs nothing really, even though the stock market requires objective value. Information as a recuperative history traced back to ‘the unseen universe’ treaty, metaphysics masquerading as physics, functions as a sort of stack related to the stacking of the invisible negative, an archive that will not be lost, she said. She highlighted how the fantasy of immortality as a male fantasy of reproduction opens up a new field of molecular biology, given the artist’s film comments on these different layers of how the digital economy is permeated with libidinal fantasies that have very little to do with technology.

Adam Szymczyk related this to obscurantism as a tactic to indulge that it is not true while sustaining a fiction that is true, which he doesn’t think is true, as it’s hiding something from political opinion as a political tactic. As several things were hidden from the people in the film, there was no access to truth, he said. He found the suggestion to follow the fly in two ways could be followed in the same way as Kanye West or BLM or the Beirut explosion – they become facts and our attention is like the fly. He read it as a work about the economy of attention and thought it an interesting and difficult one to follow, or to do something meaningful about, because the apparatus of the spectacle is built in a way that obliterates keeping anything in focus, which prevents us from the critical realm.

Flavia Dzodan found that there were multiple threads of interest: an intervention of subjectivity of the character in the image, of the performer himself. The viewer’s subjectivity is questioned with multiple stimuli – how we consume media and information, which she thinks is not a bombardment as this implies an external entity throwing this at us when here we are active consumers. The overload was emphasized by the intense colour. She found the repetition of ‘its’s not human, it’s posthuman’ interesting as she has an ambivalent relationship to posthumanism, due to potential origins in the enlightenment idea of who is allowed to be human. She found the juxtaposition of Elon Musk and Kanye West interesting as both could be described as eccentric in the renaissance sense of innovation and invention, and found it interesting that Musk is allowed the position of eccentric explorer and experimenter while West is, by virtue of being black, considered a mentally ill man and a cautionary tale. She was interested in Musk’s fantasies about colonizing mars, as his money comes from the family fortune of the emerald mines of South Africa, which have decimated swathes of the population so that there’s a lineage there that is interesting to investigate.