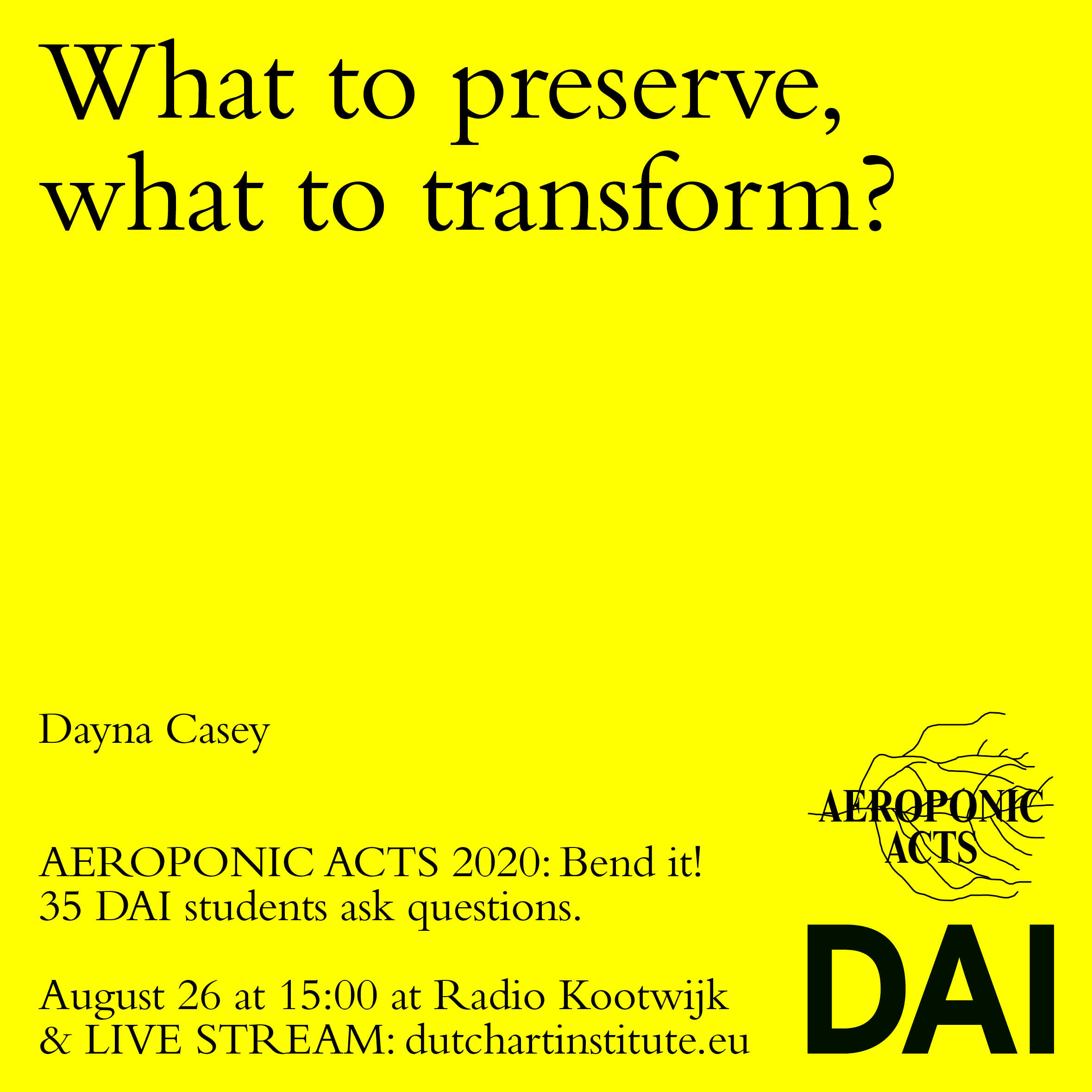 Here you will find the documentation of Dayna Casey's presentation as filmed by Baha Görkem Yalım. The written report is by Bethany Crawford and it includes a summary of the comments by esteemed guest respondents.

Fertile imaginaries, a vessel for 92% water

Intro: The seeds, the rind, the juice: an unfolding, unended digestion of the political entangled narratives of the watermelon. The scattered texts explore metaphorical associations of this durable vessel of 92% water. Spanning across ecology, (non)reproduction, plural futurity and bodily coping strategies for heat.

Amit S. Rai, Ana Teixeira Pinto, and Amal Alhaag responded to the question What to preserve, what to transform?

Casey introduced her research that involved spending time mentally and physically with the watermelon, as a catalyst for broader ecological thinking, and a metaphorical framework to think through the politically entangled narratives the watermelon can represent. The floor of the presentation space is populated with texts and diagrams detailing her theoretical journey and reflections. The paper is laminated on one side, reflecting the dual texture of the watermelon. An ambient soundtrack of water permeates the space. Squares of cloth offer stations for the audience to engage with the materially versatile watermelon: pickled and candied flesh, fermented drink, dried rinds and seeds painted with symbols reflecting the fruit’s historical use as a tool for divination. The text details the ways the seeds can be used, from planting to ingestion to divination, inviting the audience to take them home, use them and pass them on. The bodily and material interaction continues the performance within a broader fertile ecology.

Amit S. Rai found the texts were very well written, interested in how one can do fun non-representation things with diagrams and how this leads to novel representation processes and transforms connections, reflecting on eco-communism in relation to black radicalism and black feminism. The deconstruction of the seed was an engaging proposition, and he enjoyed the exploring the space in a bodily way. The process of pickling, he said, needs to be engaged with bodily and non-metaphorically, feeling he was still processing the presentation unfolding like fermentation.

It was a masterful exercise in how to ask big questions in small places, said Ana Teixeira Pinto, from the watermelon to narrating the intersections of fossil and ecological capital. She referenced Donna J. Haraway’s Staying with the Trouble that falls into the trap of global as consequence of a growing demographic; the population that are growing are not in the global North responsible for the destruction – the problem is actually about destruction and distribution of resources. She thought this ecological question requires one work through the history of fossil capital. Coal was a class project that allowed factory owners to build factories in urban centres, bolstered by liquidity from the colonies and slavery. Mason Grant, she said, the creator of American national parks and pioneer of the ecological movement – a racist and eugenicist – advocates for nature rid of humans and native populations. The video montage of the extinction rebellion, juxtaposing images of penguins with images of slums, is a kind of toxic imagery that people consume in this white innocent gaze. For her this brought up the question of environment justice.

Amal Alhaag thanked her and found it interesting to present research informed by a personal journey dealing with how to position oneself when one is embedded. She thought about where the black femininity comes in, and the quoting of Octavia E. Butler as a way of embedding how sci-fi has been a tool that marginalized people have used to escape patriarchy and other -isms. She questioned what it meant to cite a black person as a white person, and what kind of care this required. And reflected that being a black woman with her background and how the watermelon is a vital tool for survival as hosting water, made her think through questions of what it can do when one is always encapsulated. How does she respond as a black person to black people being cited? She highlighted the question of caretaking for those who you cite, and how she appreciated it in this context to show the trouble and to sit with this discomfort. She found the utility of the rubber glove interesting, as a tool that stages the texts, relating to a hierarchy of objects and how this elevated the text in a particular way. She noted the labour of the performer, how everyone was implicated as part of the performance, how there were multiple ways to engage, reading, ingesting and interacting with each other. She found this an interesting way of bringing in multiplicities and enacting the complexities of this particular fruit and the histories that attached to it.

Dayna Casey's Fertile imaginaries, a vessel for 92% water was presented at Radio Kootwijk.