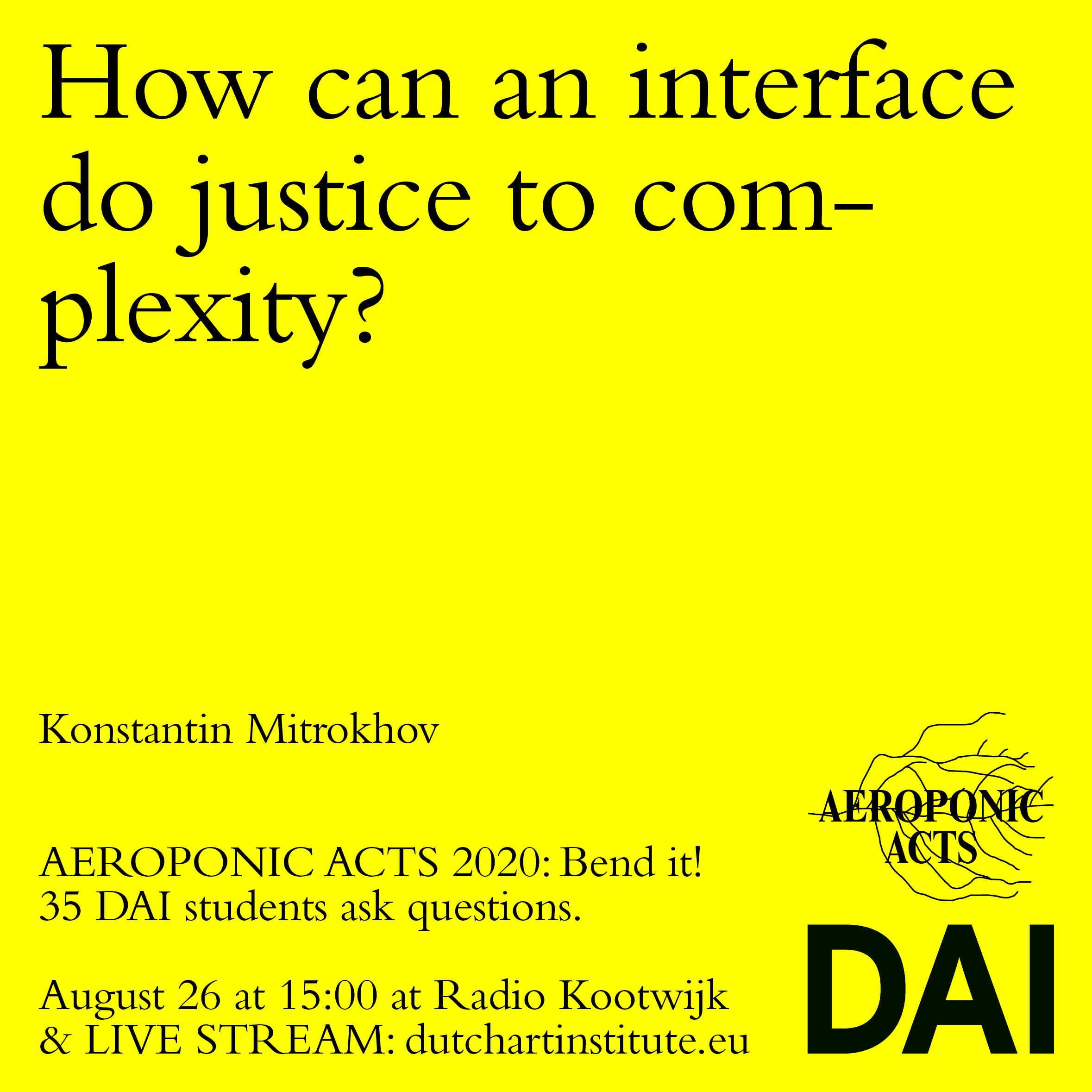 Here you will find the documentation of Konstantin Mitrokhov's presentation as filmed by Baha Görkem Yalım. The written report is by Bethany Crawford and it includes a summary of the comments by esteemed guest respondents.

An Annotated Cinematic Lexicon of Switzerland

Intro: The short film introduces a practice of interface design within the context of filmmaking. The prototype of the lexicon is an experimental response to the theoretical inquiry into non-linear, open-ended, collective modes of filmmaking. The lexicon itself figures a situated image of the contemporary nation-state of Switzerland, as it is manifested in its politics, customs, myths, landscape, wealth, and injustices. This film documents Olivia Abächerli watching the lexicon and chatting about it.

Flavia Dzodan, Amit S. Rai, and Ana Teixeira Pinto responded to the question How can an interface do justice to complexity?

Mitrokhov’s moving-image work records an interactive engagement with a multimedia taxonomical document of different facets of Switzerland. The screen shows the movement across the interface populated with images, texts and videos, showcasing Swiss culture, landscape and history. The media consortium features Snapchat and social media videos associated with particular hashtags and archival material. The media components are annotated, both on the screen through a numerical system that expands on the content with more literature, and in a conversation by the artist and a colleague, Olivia Abächerli. The work formally explores how to present the complexity and intersections of knowledges, experiences, histories and cultures, through multifaceted framing and shifting (re)contextualizations, rethinking ‘mapping’ within the context of new media technologies.

Flavia Dzodan thanked the artist for the opportunity offered by the film. The lexicon made her think of Jorge Luis Borges who also lived in Switzerland for a good chunk of his life and his short story ‘The Aleph’. It conveys the impossibility of capturing the totality of human knowledge and the need to classify everything, which she felt the film reflected on in showing the impossibility of documenting the totality of what is available and in the well-articulated frustrated tone. She reminded Mitrokhov that this lexicon would have a lot of dead ends due to that frustration and the impossibility of capture.

Amit S. Rai began with a few recommendations for the artist: Masao Adachi’s A.K.A. Serial Killer (1969) in which the filmmaker developed a landscape theory of space in relation to the nation-state; the work of Renu Savant who focuses on the Indian context of caste and masculinity in her home village; and Subhash Ghai, the first person to get an honorary citizenship in Switzerland – the Swiss government decided to give Bollywood filmmakers citizenship because so many Bollywood films are filmed there due to its landscape’s similarity to Kashmir, posing an interesting postcolonial connection; and Immediation (2019), Erin Manning’s writing on mediation in relation to media technology in Western philosophy. Rai enjoyed the experience of the click and the drag of the interface in the film, and the conversation on top of it, which reminded him of his attempt at non-linear editing and how his computers didn’t have the processing power to make it work and the processing power non-linear aesthetics take. He also thought about the invention of tradition and the ‘authentic’ Swiss landscape and culture as packaged for tourism, and how landscape plays into congealing these lines of power.

Ana Teixeira Pinto was interested in the connection with the women’s march and suffrage, moving to the images of the non-human, which made her think of the disputes about native and invasive species as a proxy for the immigration wars – the allegorical function of the animal in the collective imagination. She situated the history of the bizarre late term ‘mammal’ – in the transition between animal and woman – in the campaign to stop upper class women having their children nursed by women from different classes and races, as babies were thought to take the energy of the race. She was surprised to see it wasn’t until 1991 that women in all of Switzerland gained the right to vote, remarking on the erroneous tendency to associate the affluence of a nation with individual freedom.

Konstantin Mitrokhov's An annotated cinematic lexicon of Switzerland was presented at Radio Kootwijk.