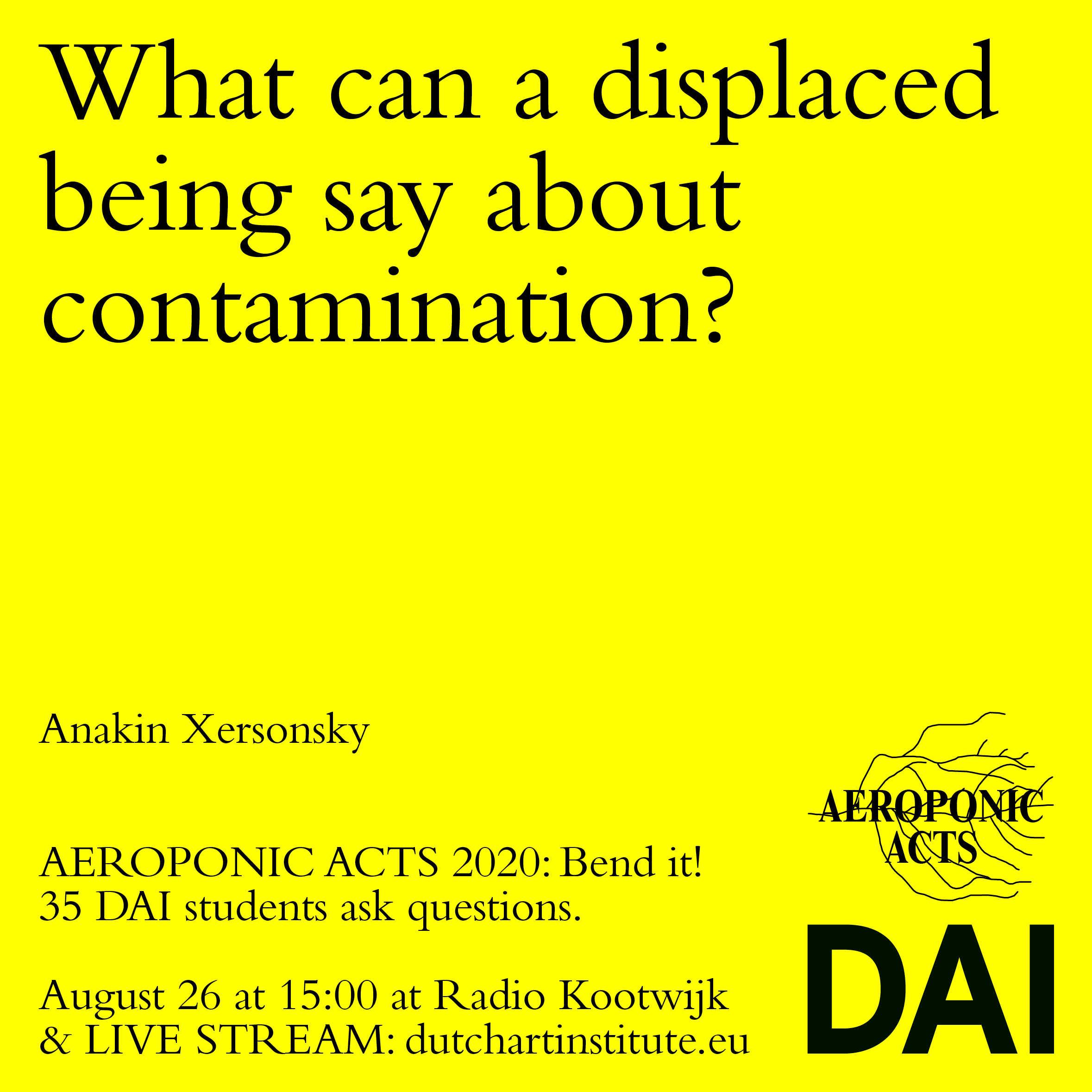 Here you will find the documentation of Anakin Xersonsky's presentation as filmed by Baha Görkem Yalım. The written report is by Bethany Crawford and it includes a summary of the comments by esteemed guest respondents.

Intro: A videogame, set in the outskirts of Kyiv, Anakin's hometown. “Skaska” means “fairytale” in Russian. “A Hopeful Monster” is the title of a study in which Ola Svensson, Alan Smith, Javier Garcia-Alonso and Cock van Oosterhout watch an intersex cichlid fish selfing in a UK university lab. “Selfing” means reproducing without a sexual mate. The videogame does not show reproduction, but a shapeshifting reality in which every encounter changes both bodies.

Flavia Dzodan, Amit S. Rai, and Amal Alhaag responded to the question What can a displaced being say about contamination?

Xersonsky introduces the work and invites the audience to come and get temporary tattoos and play a video game projected on the two screens. The artist and her assistants wear black futuristic cyberpunk attire, and the audience line up to get the temporary tattoos. The soundtrack is alien but also has the familiar sounds of wind. A player enters the gameworld moving through fantastical and beautifully saturated two-dimensional nightscapes, as an animal that adopts some of the beneficial traits of the other animals it meets along the way that assist it in unlocking and overcoming the hurdles presented in the gameplay to move to the next level and landscape. The interactions embody care, with prompts that invite the player to think through their interactions with the other animals in a way that manifests gentleness, mutual learning and inclusivity. The soundtrack is a beautiful mix of recognizable science fiction and horror sounds, evoking a haunting. The fluidly bodied character moves through the landscapes, swimming in water to flying in the sky.

Amit S. Rai thought about Jacques Derrida’s work on how the monster makes the norm visible in striking the eye as a hallucination and how Gilles Deleuze wants to fuck philosophers from behind and give birth to monsters. He questioned in what way the monster was an engagement with the visual and an interaction with information. The future as monstrosity interested Rai in relation to time, gravity and duration, causing him to ask what transforms into a monster and what operates that transformation and the monster. The artist’s assemblage, he said, made him feel the monster inside.

Flavia Dzodan thanked Xersonsky for this challenge by talking about the monstrous and how cute it was, and the horrific element of that. She felt Xersonsky really captured the many studies on the cute and creepy. ‘It is not an easy note to strike’, she said, which tied into the visual monster. Everything was sinister but at the same time moving, she added, thinking about what the displaced being can teach us about contagion in the history of migration as escaping contagion, which can tell you everything. The game’s horrific cuteness was aesthetically interesting to her in relation to representing queerness but also as a mode of being.

Amal Alhaag noted the association with cuteness as a weapon that also queered, bent or strangled super gendered video gaming, reinforcing gender binaries and white supremacy among young people. She found it interesting how skipping and flipping gender is considered monstrous and thought about cultures where other beings attributed knowledge and powers as god-like figures. What does it mean when in one particular context it is a monster while in various other contexts it is considered a different type of knowledge and of being? Even the ways we imagine worlds, she said, are contrasted in the oppressive systems that we know, ending the world as we know, and how people flock to gaming is an extension of these oppressive systems. The tattoo ritual was an interesting side note, she said, almost contaminating the body, where the collective self adds little temporary parts to the body.