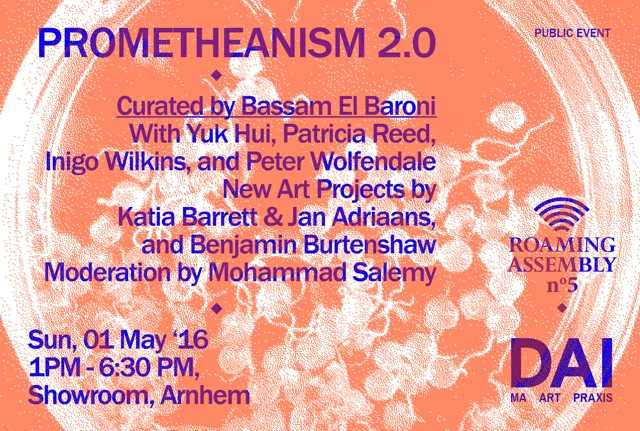 Read the invitation in Dutch

Free admission, no reservation needed for the symposium

Location: Showroom Arnhem, Kleine Oord 177 in Arnhem (at one minute walking distance from the DAI's premises).

After the event, around 19:00, a dinner (prepared by our amazing vegan chef Mari Pitkänen and her team) will be served at the DAI. Costs for visitors: € 10 for food & wine. If you wish to join us for the dinner you are most welcome to make a reservation at dutchartinstitute@artez.nl (please note that seating is limited ~closing date April 22, 2016).

followed by a short

“Prometheanism is simply the claim that there is no reason to assume a predetermined limit to what we can achieve or to the ways in which we can transform ourselves and our world.” [1]

Concurrent to global post-financial crisis politics, a theory for a contemporary prometheanism has been carving itself out from different strands of philosophy and transdisciplinary research. As an event, Prometheanism 2.0 is a condensed and partial account of this strain of thought that cuts across rationalism, pragmatism, realism, materialism, science, technology, computation, economics, politics, and art to shape its foundations. It attempts to articulate the major positions, concerns, and questions for a contemporary prometheanism through both theoretical talks and artistic representations. In which sense can art practice be promethean? Where does the urge come from? Why and how should art take on this challenge? This event hopes to bring to the table discussions and questions regarding a contemporary promethean position and its embrace in art practice, contributing to further sharpening, clarifying, and formulating a prometheanism 2.0 that, to an extent, still remains germinal. READ MORE

Beyond Cyborgs is an artwork that takes the form of a 10 minute introduction followed by an audio performance comprised of four short audio extracts played at stated intervals throughout the day. READ MORE

The aim of this talk is to articulate and defend the connection between contemporary forms of prometheanism and rationalism. It will begin by defining prometheanism through its opposition to political liberalism and normative naturalism, as developed by the projects of left-accelerationism and xenofeminism. READ MORE

Contemporary Art (CA), in its systemic condition, is buttressed by four core axioms that have been notably identified by Amanda Beech and Suhail Malik: art can be anything and anywhere; it is semantically precarious; it can only gain meaning through the correlation of interpretation; and, it is non-propositional. Guided by such conditions, CA can only adhere to models of negative freedom (functionally speaking) that are isomorphic with our neoliberal hegemony, even though the rhetoric and discursive sphere surrounding CA make political claims otherwise. READ MORE

1st session’s open questions and follow up discussion, moderated by Mohammad Salemy, independent New York-based artist, critic, and curator. With the participation of the audience, Peter Wolfendale, and Patricia Reed.

A Film Screening followed by a short discussion with Bassam El Baroni,

Prototype-Protagonists is a new film, duration approx. 12 minutes. Shot in Cologne, Germany, this is its first public screening.

"For salamanders, regeneration after injury, such as the loss of a limb, involves regrowth of structure and restoration of function with the constant possibility of twinning or other odd topographical productions at the site of the former injury. The regrown limb can be monstrous, duplicated, potent. We have all been injured, profoundly. We require regeneration, not rebirth. (Haraway,1991)" READ MORE

On the Becoming of Prometheus

by Yuk Hui, researcher and writer

Günther Anders, in the first volume of his The Obsolescence of Man (1956), described the emergence of a ‘promethean shame’ produced by the new industrial technologies, which he claimed replaced ‘heroic prometheanism’ and turned into a symptom of the times. After decades, an optimistic prometheanism is growing across the globe. READ MORE

by Inigo Wilkins, researcher and co-director of Glass Bead

A common objection to Prometheanism is that the unforeseen contingencies of technological change may upset the 'fragile equilibrium' of nature. There are conservative religious claims that certain technologies amount to ‘playing God’ (e.g. pro-life), and vitalist anti-capitalist variants, which assert that nature is priceless and should not be risked (e.g. anti-GM). READ MORE

2nd session open questions and follow up discussion, moderated by Mohammad Salemy, with the participation of the Audience, Yuk Hui, and Inigo Wilkins.

Drinks for all & THE END of Roaming Assembly#5