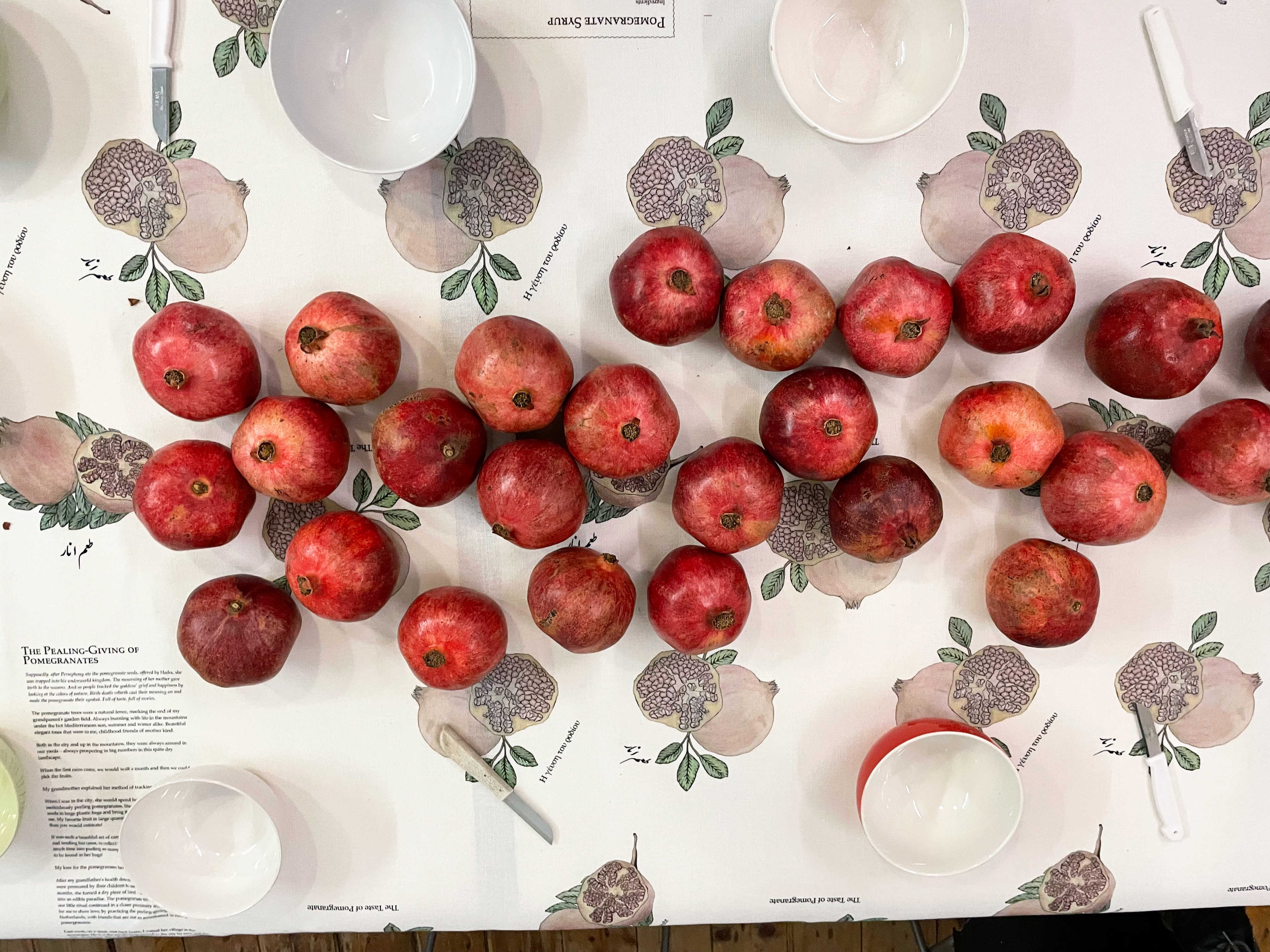 The Taste of Pomegranate

The pomegranate is a fruit of life, death, and rebirth. It can take the shape of a golden necklace hidden in a grandmother's bra during the aftermath of the Islamic revolution in Iran. Or to be peeled and offered by another woman to her migrant granddaughter. In our student-led The Taste of Pomegranate, the participants were invited to prepare pomegranate syrup on top of a cotton pomegranate illustrated tablecloth and printed stories about this precious fruit. With each stain and seed, the pomegranate traces us towards the sour taste of life and death. In this chronicle, we share the two stories printed on the tablecloth. Have a tasteful journey! 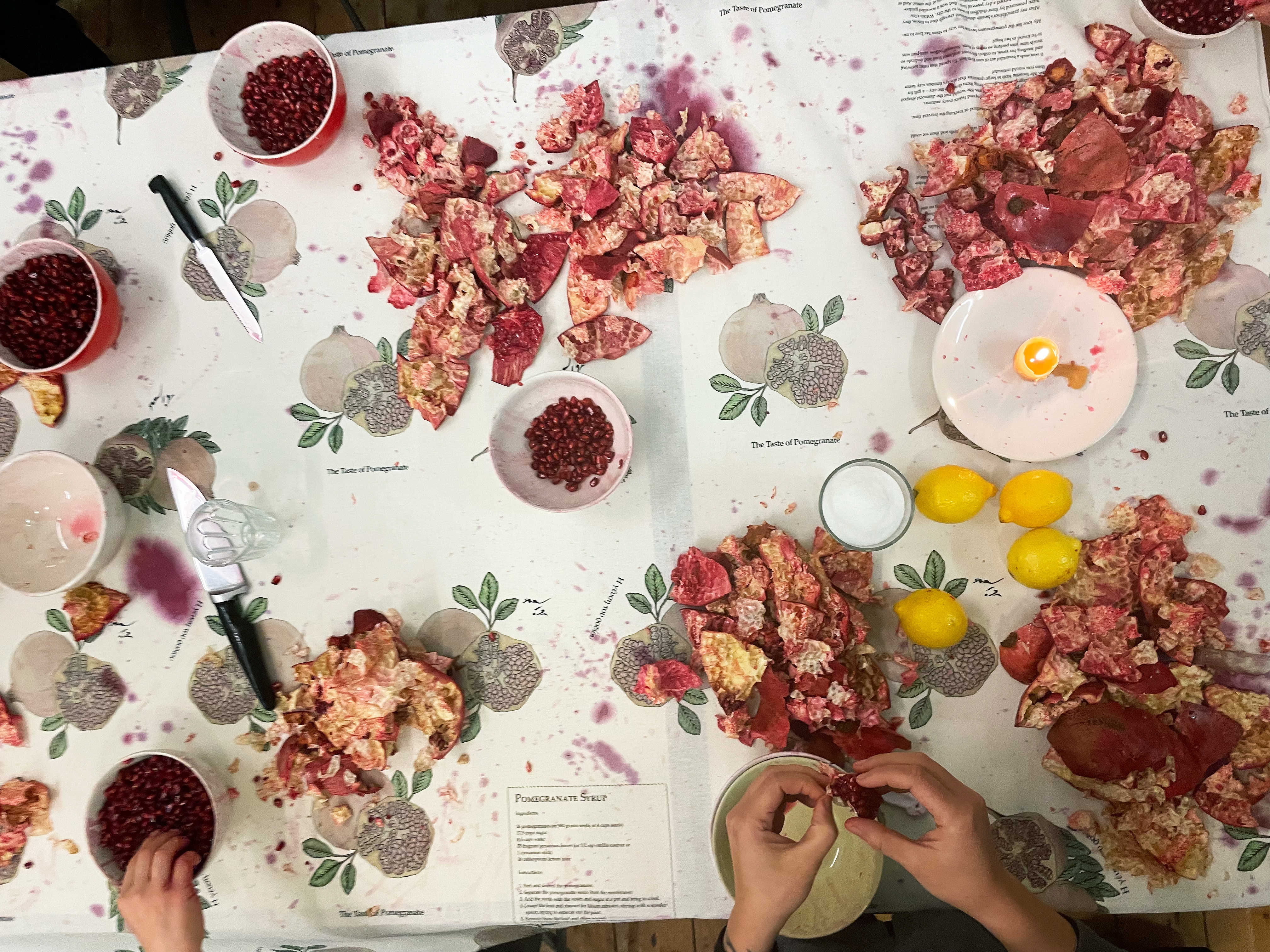 Supposedly, after Persephony ate the pomegranate seeds, offered by Hades, she was trapped into his underworld kingdom. The mourning of her mother gave birth to the seasons. And so people tracked the goddess' grief and happiness by looking at the colours of nature. Birth-death-rebirth cast their meaning on and made the pomegranate their symbol. Full of taste, full of stories.

The pomegranate trees were a natural fence, marking the end of my grandparent's garden field. Always bursting with life in the mountains under the hot Mediterranean sun, summer and winter alike. Beautiful elegant trees that were to me, childhood friends of another kind.

Both in the city and up in the mountains, they were always around in our yards – always prospering in big numbers in this quite dry landscape.

When the first rains came, we would wait a month and then we could pick the fruits.

My grandmother explained her method of tracking the harvest time.

When I was in the city, she would spend hours every autumn, meticulously peeling pomegranates. She would put the diamond shaped seeds in large plastic bags and bring them down to the city – a gift for me. My favourite fruit in large quantities that always finishes way faster than you would estimate!

It was such a beautiful act of care from her. To spend that time, growing and tending her trees, to collect the sweet and sour fruit and dedicate so much time into peeling so many of them. No sour yellow skin part was to be found in her bags!

My love for the pomegranates became her way to show her love to me.

After my grandfather's health deteriorated enough due to illness, they were pressured by their children to move to the city. Within a few months, she turned a dry piece of land – that was a so-called garden- into an edible paradise. The pomegranate tree was at the centre! And so our little ritual continued in a closer proximity and even became a way for me to show love; by practising the peeling-giving ritual here in The Netherlands, with friends that are not so accustomed to eating pomegranates.

Last week, on a quick visit back home, I visited her village in the mountains. Most of the people have moved to the city by now and the little village feels like a ghost. Walking around the now unrecognisable gardens, in every corner, in every former yard, stand in silence the unharvested pomegranate trees. Cracked, dark colored, dried out pomegranates are still hanging in their big numbers from the branches. Some of them united with the soil at the feet of the tree, slowly becoming hummus. Starting again.

“I found it in the gas station's toilet when we were driving to her childhood home. I felt something under my shoe, and there it was.’’

“No, I gave it back, thinking she’d lost it. But then she claimed she lost it again the next week.”

“I thought it was from the family.”

“I’m the family. Who was it that put the necklace under their breast and secured it with a bra? Your grandfather?”

“You don’t believe me? Want me to show you?”

“What else was there to do? Your grandfather went quiet when he heard of it. It was beyond his imagination that a woman, let alone a mother, would smuggle. Strange, he if anyone, should’ve known.”

“He was a communist, he smuggled books and newspapers. Men like to be martyrs, yet know nothing about how to smuggle love. Silly!’’

“Yes it was love, hidden beneath a blouse, a jumper and a chador. At that time they harassed and searched everyone who left the country. My hope was that the security guards would be more gentle towards an old woman like myself. A haji Khanom if you will. Maybe they would spare her bra? But your grandfather—he disapproved.”

“Why? He despised me for wearing a chador. Never walked next to me when I did. So he disliked this idea too. I could feel his disgust even if he did not tell me with words. However, you mustn’t lose your faith in God. Even if your husband insists on it.’’

“And she hasn’t married.”

“Grandma, you can’t say that! Her fiancé died.”

“Yes, exactly. That’s why she came with me. She was only twenty-something back then. Heartbroken and tired of being in the country.”

“Anybody can get tired of being anywhere.”

“I’m tired of living with dad.”

I nodded, overlooked the dry grass patches and fanned myself with a piece of cardboard.

“Why, a golden pomegranate?”

“I don’t know. It was beautiful. I dunno, God knows. You’ve such a kind mother, take care of her.

“Esmat? Boro baba! Only because she has a pomegranate garden? She’s very kind, but smells bad. God bless her!”

“I thought I was the only one who thought so, but I’ve never said anything.’’

“Especially when she opens her chador. It’s as if every movement with it sweeps out an odour of sweat. She needs to wash it, woman. She gave us several kilos of pomegranate just before Shabe Yalda. I think we still have some left, if you want after breakfast.”
“After breakfast, no, I'm going out with Aunt Faeze. Dad finally lets me leave the house without him.”

“It was better when your mum came here alone. Your sisters would play with the children around the block. Your mum and I could not speak to each other. I didn’t know Swedish and the poor woman didn’t know Farsi. But she was very smart and had beautiful blonde hair. And a small nose like you. But she learned Farsi just a few months after they took her passport. She came alone, without a husband. But with three children. And they refused to talk. The first time they said "Butter” in Farsi we were shocked. We were all thinking they might not know how to speak the language. Maybe your father had lied to us. You never know with children growing up outside Iran. What will happen to them?’’

“Really? You know your sister asked me what language I speak with you. What did she think—that you had learned Swedish? ”

“You should’ve told her that, then she would be jealous! Well, after “Butter” your sisters spoke to us, mostly with your cousin Sahand.”

“Yeah, but he doesn’t speak with them anymore. He doesn’t even look at them.

“He’s a man now. Blind. Just like the security guards.”

“They never found anything? What about the metal detectors?’’

“It beeped when I passed through so they took me aside but thank God I’m old and have fed five kids. My breasts are flat like Barbari.”

“Am I lying—tell me, am I lying? And with these legs. Imagine! When the women at the security asked me to undress, I almost fell, so they had to bring me a chair. But still, they were not gentle. Fereshte had to undress completely in front of them.”

“They’re crazy! You could not wear any gold when leaving Iran?”

“Not even this one with Imam Reza?”

“Of course this one and my wedding ring. And the necklace. I’m sure your mum had her reasons for throwing it away.’’ 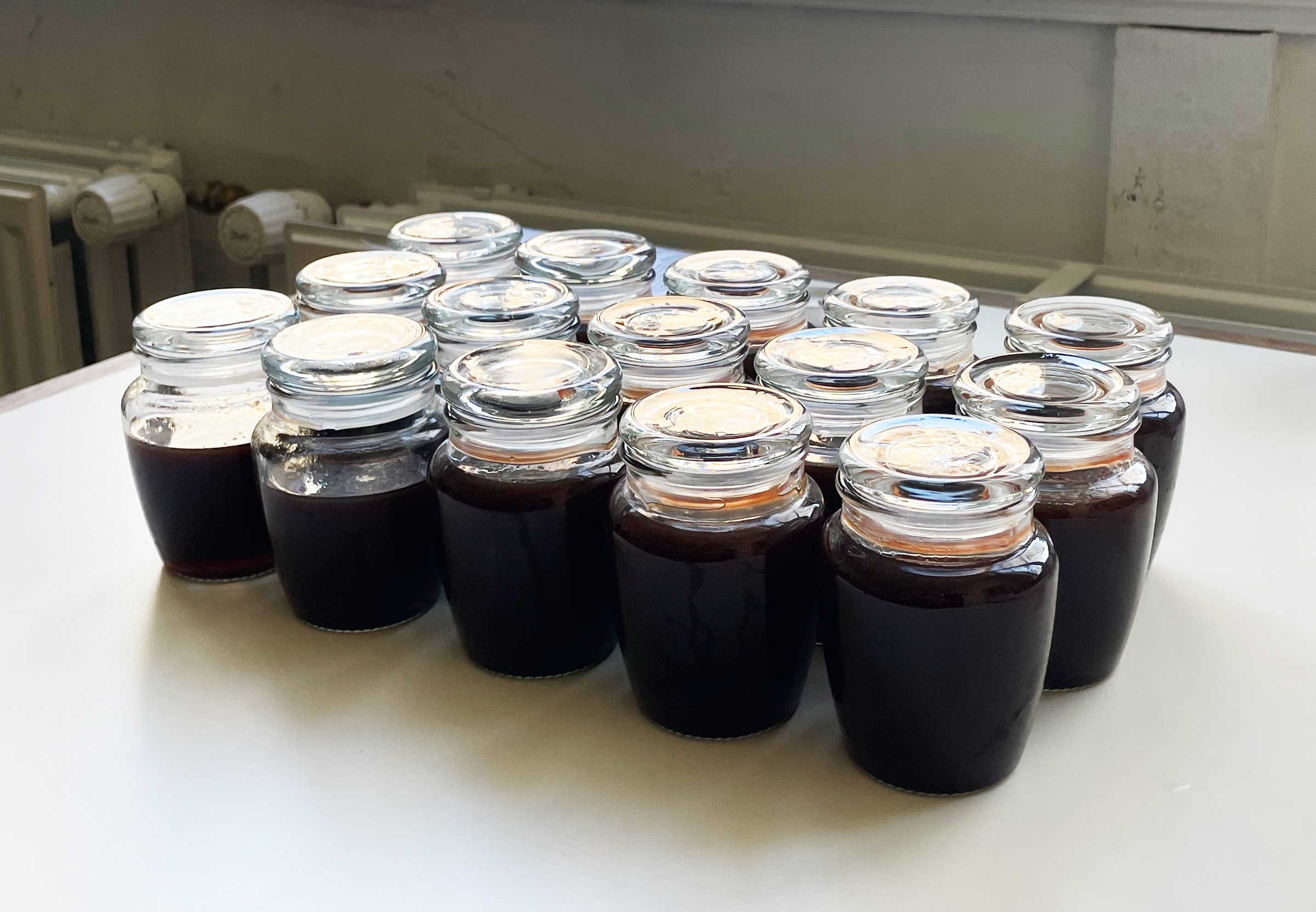 BACK TO INTRODUCTION: COOP study group ~ You fed me when I was hungry: Food Commons and Ecology of Belonging