2019-2020 Staying With the Trouble | WHAT IF EVERY FAREWELL WOULD BE FOLLOWED BY A LOVE LETTER? 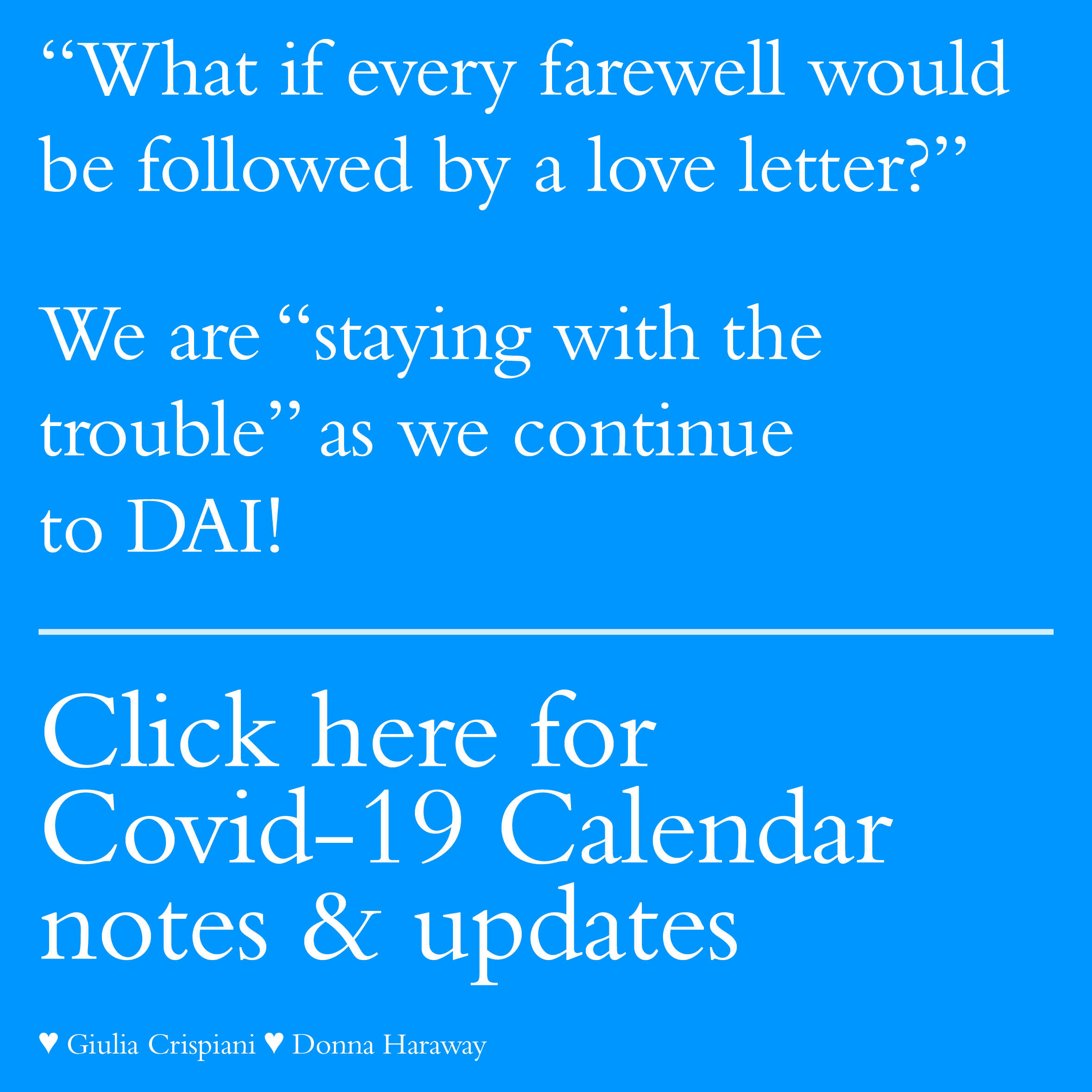 WHAT IF EVERY FAREWELL WOULD BE FOLLOWED BY A LOVE LETTER?

Calendar 2019-2020:  our initial schedule as we had planned and organised it before the Covid-19 outbreak

Fueled by the massive input from the part of DAI's student led Crisis Group, (itself informed by the DAI's student led General Assembly*, and in ongoing, and equally rewarding conversation with the tutors and our partnering institutions, thereby also considering the very regular updates from the part of the various governing bodies and participatory councils of ArtEZ, we, the DAI Dynamic Team ( Nikos Doulos, Florian Göttke, Rik Fernhout and Gabriëlle Schleijpen) are deconstructing the curriculum as it had been designed and fully organised for the entire academic year 2019-2020 and are working together towards several alternative pathways - in order to anticipate various possible scenarios that might unfurl in the months to come. It is obvious that at

*Our 61 students have managed, during what was coined a, by all means epic effort, to set up an online conference meeting between all of them, which reportedly lasted for more then 3 hours, resulting in an 11 page long communique. This collective text is an important and warmly embraced contribution to what we are currently developing.

- both Covid-19 and the related postponement of sonsbeek20-24 (important partner for our initial 2019-2020 curriculum in June, July and August) forced us to cancel or postpone arrangements with hosts and we are now re-orienting towards possibilities for gathering later this summer or, if necessary in the fall.

- Not only do we need to comply with all the governmental health regulations, we also need to work with the regulations of the Central Exam Committee of the ArtEZ University of the Arts. The CEC has published its first Note of Exception. More editions are likely to follow, depending on how the crisis evolves.

- In line with the Dutch Governement's decree we will not organize gatherings of more than two people till (officially) May 20, but realistically speaking we are not even thinking of any in the flesh gatherings before July.

On April the 24th the Dutch Government had not shared any communication about general permission for a (cost free) extension to the running academic year (which in the Netherlands officially begins September 1 and ends August 31 after which students have to re-enrol if they have not yet been able to succesfully conclude their exams). However:  Dutch newspaper NRC announced that the Minister of Education is willing to compensate additional tuition costs in case of study delay caused by the pandemic during a student's FINAL year. At this point we do not know any further details. Does this apply to students of all nationalities ? We think it should, but the article is unclear about that.

While closely monitoring the national and institutional decisions around Covid-19 as well as the global developments and more particularly the situations in the different countries where our students and tutors are based, we aspire to publish the adapted and confirmed DAI-planning for May at the end of April, the adapted and confirmed planning for June at the end of May. We will confirm the program for July, August and possibly September2020 as soon as there is maximum certainty. Until then you will find the scenarios under scrutiny on this page.

DAI crew members Ricardo Liong-A-Kong and Peter Sattler can be contacted (make an appointment first !), to support all online DAI group meetings, seminars, tutorials etcetera in Teams, a tool that has been made available by ArtEZ since 2019. ArtEZ like most universities in the Netherlands (and elsewhere) has committed to very strict online privacy rules. Read more.

Please find the division of tasks between Peter and Ricardo here

"They say that through the digital, the body of flesh and bones, the physical and mortal body, will be freed of its weight and inertia. At the end of this transfiguration, it will eventually be able to move through the looking glass, cut away from biological corruption and restituted to a synthetic universe of flux. But this is an illusion, for just as there is no humanity without bodies, likewise, humanity will never know freedom alone, outside of society and community, and never can freedom come at the expense of the biosphere." From: The Universal Right to Breathe ~ Achille Mbembe, 13 April 2020

".........the philosopher who best anticipated the ongoing viral apocalypse is Donna Haraway. In Staying with the Trouble she suggests that the agent of evolution is no longer Man, the subject of History. The human is losing its centrality in this chaotic process, and we should not despair over this, like the nostalgics of modern humanism do. At the same time, we should not seek comfort in the delusions of a techno-fix, like the contemporary transhumanist techno-maniacs do. Human history is over, and the new agents of history are the “critters,” in Haraway’s parlance. The word “critter” refers to small creatures, small playful creatures who do strange things, like provoking mutation. Well: the virus." (Franco "Bifo" Berardi in Beyond the Breakdown. Three Meditations on a Possible Aftermath).

Due to the global spreading and high risk of contamination of Covid-19, our students, crew and tutors are currently working from their (sometimes temporary) home bases in a wide variety of countries in Europe and beyond, FOR AS LONG AS THIS WILL BE NECESSARY. Apart from the one-on-one thesis guidance for second year students (which will continue in April as it was already scheduled between tutors and students) and the one on one Post-Kitchen conversations, all other aspects of the DAI's curriculum are currently under scrutinity in order to become re-configured.

At the core of our efforts and considerations in relation to the current academic year are five things:

- Health, safety and wellbeing of our students, tutors and crew and all the people around them.

- The proliferation of financial problems among students, who are very often also free lance (art) workers. While many were already living precarious before the Covid-19 outburst, the unprecedented scale and duration of the lockdown has dramatically decreased the possibilities for students to find jobs to sustain their studies. This particularly applies to the cultural sector which has been hit very hard.

- 'Embodied research' is what we do, what we are. We cherish that, so far, we had managed to resist the digital classroom as a structural method within our program. The current crisis forces us to adapt our curriculum and to temporarily cancel our in the flesh gatherings: for now our bodies must stay where they are. That we can still mobilize our intelligences in a virtual (or postal way:)) implies that we must for the time being rethink and make the best out of the disembodied classroom (in a creative variety of formats). We are partly moving specific tutorials on line, but at the same time we are firmly decided that another substantial chunk of our intensive collaborative, cooperative, collective work can not be easily substituted and we insist that we will need to find meaningful ways to come together and prepare for an embodied grand finale to the 2019-2020 trajectory WHENEVER THE CONDITIONS ARE RIGHT. To quote from a text by the 11th Berlin Bienale: "each and every vulnerable body is of value for the collective being that is the world".

- Concurrently with our efforts to think of a format for a gathering, projected somewhere in the hopefully near future, we are working hard to secure timely graduation for second year students who are in no way in the position to dedicate time beyond the initial time frame of this academic year.

- Under the current, short-sighted and dangerous tendencies of re-nationalisation in response to global crisis and collapse, PLANETARY solidarity, resistance and collaboration, pleasure and love are more than ever needed and as DAI, we will do our utmost to keep the spirit of Édouard Glissant's "one world in relation" alive as one of the driving forces behind our program and our praxes.