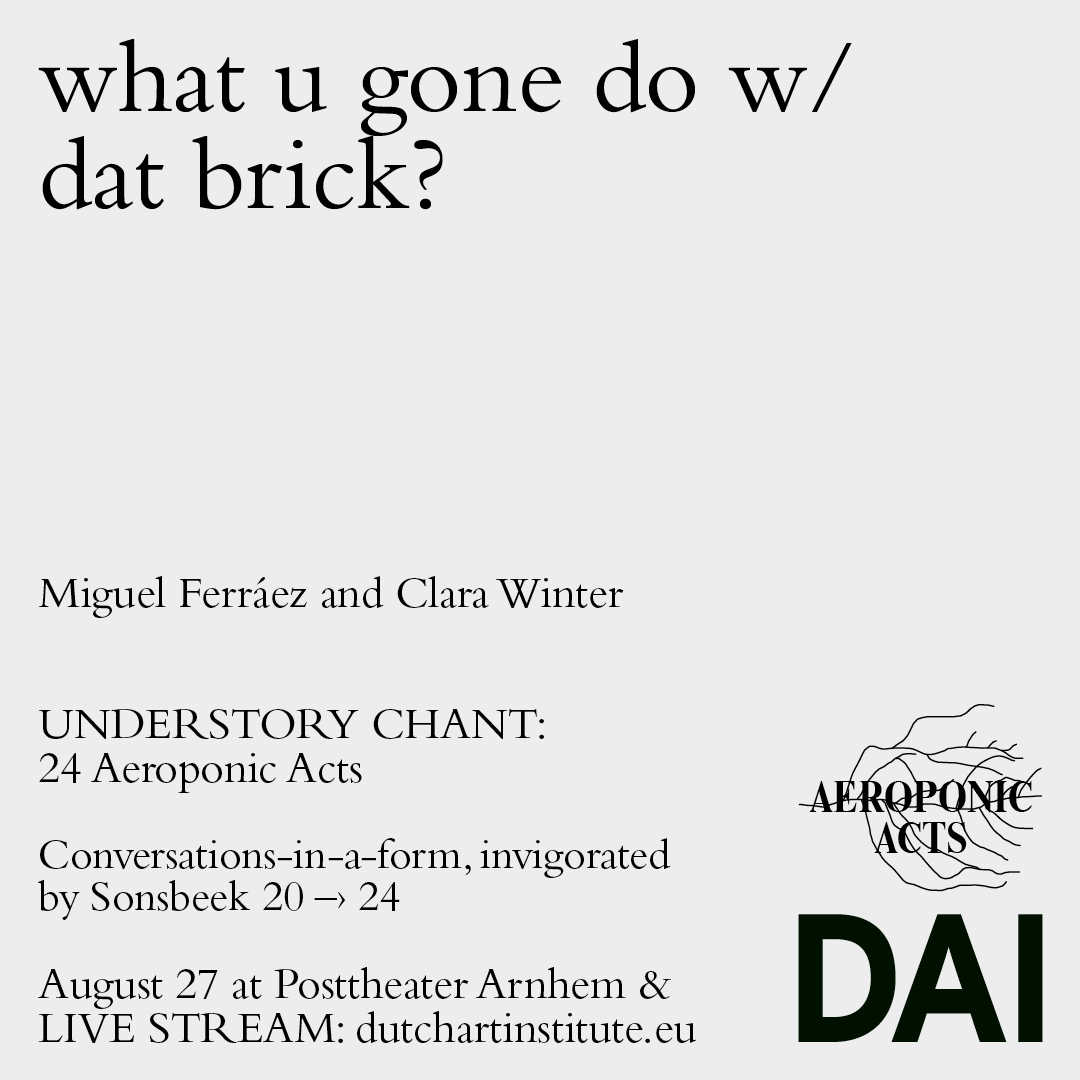 Here you will find the documentation of Miguel Ferráez and Clara Winter's presentation as filmed by Baha Görkem Yalım. The written report is by Harun Morisson and it includes a summary of the comments by esteemed guest respondents.

Clara and Miguel's question: what u gone do w/ dat brick?

Harun's report:A cuckoo sound. Blurred sirens. A curtain is pulled back to reveal two monitors featuring Clara & Miguel in leopard-skin tops in a bar. The two screens run concurrently, mirroring each other. As an artist duo the role of duality is constantly played with and disrupted. There is the sense of an internalised conversation, that we overhear. “Did we speak?” A series of off-the-cuff observations and musings. . .  “Do you know that otters hold hands when they swim to not lose themselves? / We’re haunting the present? / Of course a lot of us are victims. / There are terrible things that have happened.” Purple lyrics on a yellow backdrop are projected on the wall, evoking a karaoke lyrics screen. Three people in bed sheets dancing out of sync appear as ghosts.  ROSANA & THE GHOSTS. There is a comic reference to Mark Fisher. Clara mentions their avatar / bot which is projected on the wall. It is another gesture towards a fracturing of self. “When you work with bots you’re always in the past and connected with who makes money on it.”  If Clara presents the bot as an example of digital coloniality, it segues into their rejection of the phrase ‘colonial oppression’, rather than 500 years of ‘indigenous resistance’. In another break of rhythm, the audience are enjoined to take out their phones as music plays, rousing the energy of a stadium in a humble local theatre. Those on the seating rake began to spontaneously dance. The three respondents don the bedsheets and become ghosts.

Momtaza Mehri: Thanks for making ghosts fun. This was a party of ghosts. In terms of hauntalogy they’re when they are referenced they are so morose. So thanks for making the ghosts joyous - and bringing them into the room with us.

Barby Asante: I don’t know if we’re being seen, felt or heard.

Miguel Ferráez and Clara Winter's "no cops, no jails, no linear fucking time" was presented before live audience at the Posttheater in Arnhem on August 26th.