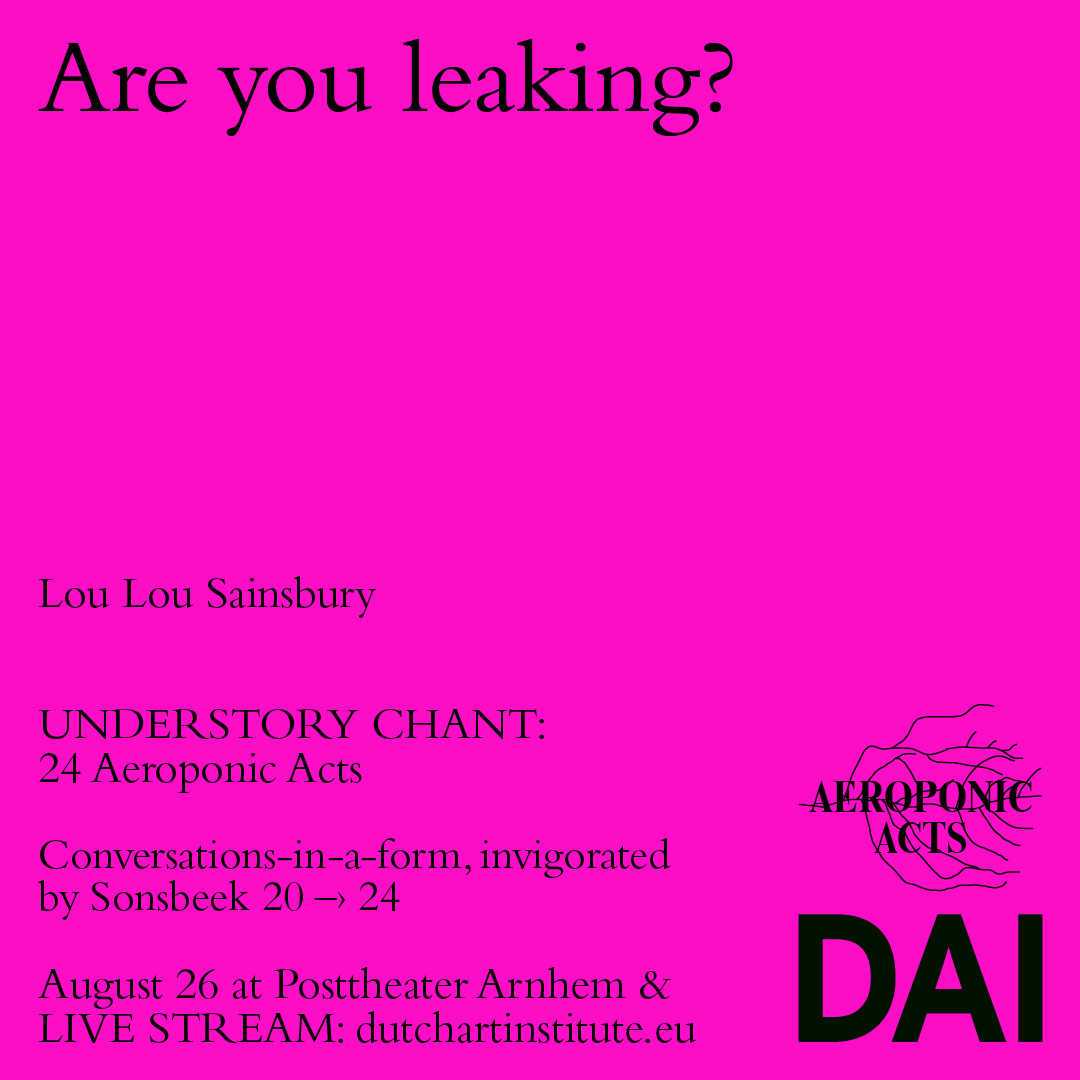 Here you will find the documentation of Lou Lou Sainsbury's presentation as filmed by Baha Görkem Yalım, followed  by a written report, authored by Harun Morrison, which includes a summary of the spoken comments by esteemed guest respondents Barby Asante, Lisette Lagnado and Momtaza Mehri.

pollen spools out, words scatter through a waiting room window

Lou Lou's question: Are you leaking?

Lou Lou's introduction: In the waiting room, history performs its own waiting. Romance is a bite from an open window, the stench of it burnt her nostrils. Earth is deadnamed. A love scene of sorts, of friendship in the horror of a shapeshifting yolk.

Harun's report: As a reworked version of Scene d’Amour from Alfred Hitchcock’s Vertigo (1958) plays, a laptop on the ground, a mobile phone out, we are enveloped by the recognisable and informal. Two voices are singing a song to each as the sound becomes distorted… “The whispers of pollinators’ legs.” There is a delicacy disrupted by a ringing phone, Lou Lou exits the stage and is handed a metal bowl by Raffia. Lou Lou reappears with a metal bowl of homemade transparent gloop. Oestrogen gel? We don’t initially know what it is, but the smell of geraniums eventually fills the room.

They rub the gloop on their legs, burrowing themself into Marie. The gloop is shared. They are sharing the gloop. It's more likely wax. We imagine its texture. ‘Are you in the grace of god?’ is spoken by Lou Lou. We are witness to an intimate rehearsal of angular body movements, fragmented episodes of an alternate domesticity. A short, recorded ASMR-like narrative plays; an intimate scene between a leaky alien and their partner in a doctor’s waiting room. Alongside spoken word, autotune and singing, Lou Lou and Marie slowly join together and embrace on a chair. The Pietà is evoked in a final stage image, questioning how private mythology can emerge from a wider, even antithetical, collective imaginary.

Barby Asante: I was very moved. Found it very emotional. I’m still lingering with the smell of geranium, the depth of intimacy that we witnessed. I was thinking about waiting rooms as points of transition. . . And what it is to be with waiting. Waiting that feels out of your control. I was returning to the text. Histories that aren't written, that are waiting to be written. I’d point you towards Lote by Shola von Reinhold; a book reimagines the 1920s ‘bright young things’ with a black queer character and tries to imagine this person who is not real but could be real. Use the traces of history to fabulate. I’m left with a feeling of anything being possible - but also sadness. Sadness around intimacy.

Momtaza Mehri: Made me think of concepts of leaking, spilling, overflow. Being hit with the spell. . . I wanted more pauses in the presentation. . . You can see in the pause an interaction between the natural and the body. I was captured by the idea of the window as an opening into a what or where or whom. . . Of this rediscovery of wonder in washing your legs. / Self-pollination. Pollination is both everyday and miraculous. Pushing at the quotidian processes. Enabling what could have been to slip to the surface. I was reminded and glad to be in a theatre.

Lisette Lagnado: The first thing that struck me was the soundtrack which reminded me of Hitchcock. / I don’t have words to describe my appreciation of the piece. It’s the end of the second day. It has an air of radicalism, the intimacy we have watched is an intimacy that has built from time together. I'm from a generation that crosses the second pandemic, because we can't forget AIDS. The revolution will not be performed in the streets, it might begin in what we call a safe place.

Lou Lou Sainsbury's "pollen spools out, words scatter through a waiting room window" was presented before live audience at the Posttheater in Arnhem on August 26th.