Marie Tučková́: I gave you everything I drank for free 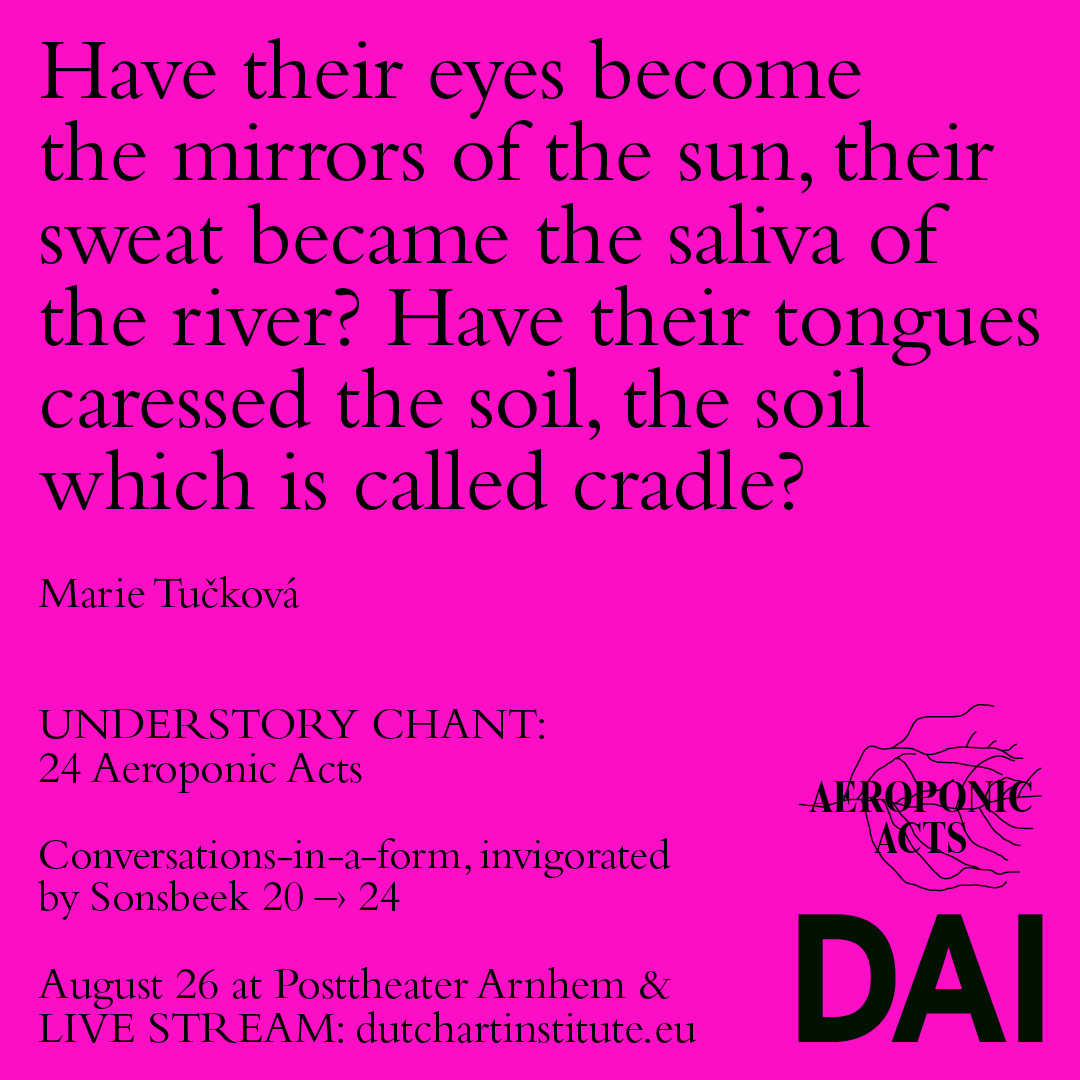 Aeroponic’ – root systems nourished by air – Acts is the name given to the nomadic Dutch Art Institute’s final Kitchen presentations. Each participant addresses one question, as a practice of engagement.

Here you will find the documentation of Marie Tučková's presentation as filmed by Baha Görkem Yalım. The written report is by Harun Morisson and it includes a summary of the comments by esteemed guest respondents.

the polyphonic womb, the laughter of the sister sweat, reverberation of silence and the popping bud, exhale: there used to be a dead river

Marie's question: Have their eyes become the mirrors of the sun, their sweat became the saliva of the river? Have their tongues caressed the soil, the soil which is called cradle?

When the choir lays its voices on the ocean belly

Schism opens and the singing of vaginas resounds

The polyphonic mouth of the ocean

Breath, the exhalation of which echoes in the waves

You can hear them

as the rhythm of the heart core

Harun's report: A post-punk eco-dystopic cabaret guided by the spirit of Klaus Nomi? We encounter a figure from another world, or the future of our current one. Dishevelled and subjugated, she exits crawling on her knees returning with a person on her back. “I am the sister of a tongue”. Fragmentary texts are read on her phone. The tropes of Post-War 20th Century theatre are evoked and their attending traumas. She speaks of drinking a dead river. She leaves this person on the ground, crawls off and returns with another on her back. They are gently laid to the floor. She reads another text from her phone. The image of the dead river returns. Marie, singing as though to console not only herself but the world around her, crawls offstage again and returns with a third person. The two bodies left on stage begin their own gentle interactions. Polyphonic winds are stirred,  four bodies are entangled in a comforting heap, close to the ground. They sing for what is lost, their breathing becomes heavier and more rhythmic, falling into sync. Voices from unseen bodies join them, the breath rises and falls eventually into silence.

Momtaza Mehri: The polyphonic voice came through -  and also storytelling which I felt came through the lyrics. It evoked the universalized mother, the universalized child. Representing a pillaged earth. In the second part, the grappling was evocative of other bodies. I appreciated references to oceanic connections. The notion of being engulfed and engulfing. You were rooted in the beginning and transitioned to a writhing mass. I’m reminded of Bataille: 'The animal is in the world like water in water’.  The past tense is an interesting space to be in. . .and lends the work a mournful quality. If the child represents the degradation of the environment where does this take us? How does your own personal silence become a generative space. . . outside of speech to add to the polyphonic choir?

Barby Asante: Quoting Astrida Neimianis, “As watery, we experience ourselves less as isolated entities and more ... as distant as the primaeval sea, yet also closer than our own skin.” I could see a history - or herstory, of feminist performance history. Earth Mother energy but in a different way. What was missing for me was anger. It was mermaidy, but I felt I needed another force. I’d refer you to a performance of Loveless by 4hero feat. Ursula Rucker - a lament for Mother Earth. The work also raises a question of indebtedness. . . What do we owe each other, what do we owe the Earth? Harney / Moten say “We owe each other everything”. Was there too much labour from you (Marie)? What would it mean to distribute that labour? To have others carrying others on their backs?

Lisette Lagnado: I originally intended to read a quote from Audre Lorde regarding the erotic. . . but by the end of the performance I realised there’s a difference between the vagina being offered and what I could read. We are now passing through a time very similar to the 1930s. Something like experiencing the silence of soldiers returning from the world wars. The impossibility of telling of the experience which leads you to the impossibility of the storytelling. Are we dealing with an impoverishment of experience in not being able to meet? I was struck by a yawning gesture, but it could be the representation of a fish, or an orgasam that never quite emerges. The presence of the cell phone as a device just to read, reminds me of narcissistic mind frame. That you are looking to yourself. . . And that you are performing for the cellphone. I would recommend a laboratory of communal orgasm. How could you push the radicality out of its cradle?

Marie Tučková's "Sonic Witch" was presented before live audience at the Posttheater in Arnhem on August 26th.