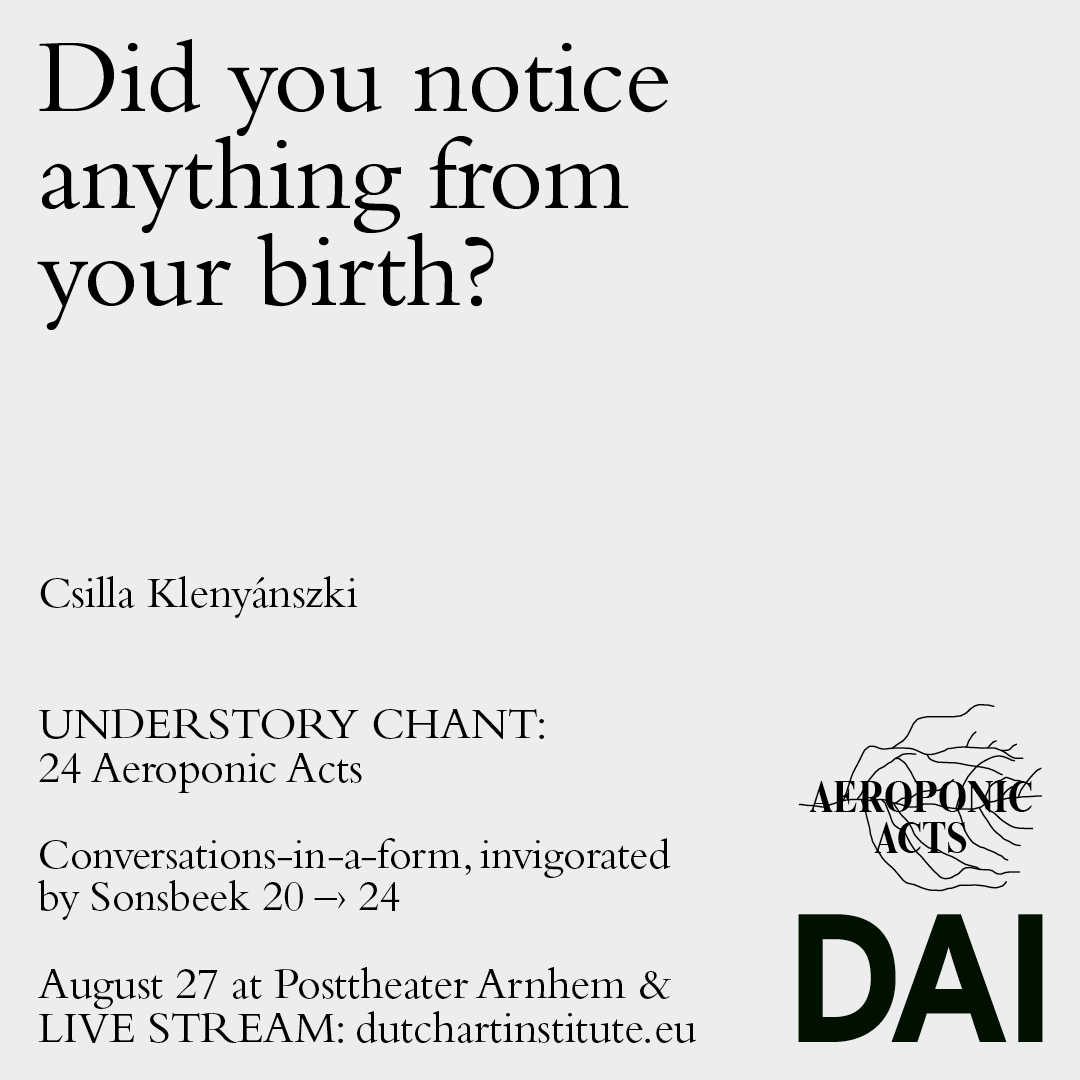 Here you will find the documentation of Csilla Klenyánszki's presentation as filmed by Baha Görkem Yalım, followed  by a written report, authored by Harun Morrison, which includes a summary of the spoken comments by esteemed guest respondents Barby Asante, Lisette Lagnado and Momtaza Mehri.

Csilla's question: Did You Notice anything from your birth?

Csilla's introduction: “Let’s prefigure a way of manufacturing one another noncompetitively [...] Where pregnancy is concerned, let every pregnancy be for everyone.” (Sophie Lewis, Full Surrogacy Now)

Standing in the produce aisle, looking at all these fresh fruits and vegetables I remember these lines from Sophie Lewis’ Full Surrogacy Now and I’m thinking “How can I share this experience with you?”

Harun's report: As we enter the auditorium there are apples on the ground, we are invited to pick one up but not eat.

“Let’s prefigure a way of manufacturing one another noncompetitively [...]

Where pregnancy is concerned, let every pregnancy be for everyone.”(1)

We watch a split-screen video: a changing ultrasound scan on the right, on the left a succession of fruit standing in for the size of a growing embryo and foetus. There are reflections on standing in the fresh produce aisle, the supermarket is emphasised as a nexus for multiple lines of production.  A Poppy seed, Orange seed, Sweet pea, Blueberry, Raspberry, Cherry, Prune, Strawberry, Lime, Lemon, Orange, Apple, Avocado, Onion, Cucumber, Mango, Sweet Potato, Banana, Red bell pepper, Grapefruit, Pomegranate, Coconut, Eggplant, Courgette, Cabbage, Broccoli, Head of lettuce, Cauliflower, Cantaloupe, Celery Root, Pineapple, Butternut Squash, Napa cabbage, Honeydew melon, Canary melon, Watermelon, Pumpkin. “The size of a foetus is often compared to fruit. I am currently carrying an eggplant.” What to expect when you're ‘expecting’? "Food is something we like to share with others: it builds trust among people and creates a sense of collectivity. Now that you are here, I would like to offer you some strawberries. 4 cm, 7 grams, 10 weeks old." "It shouldn’t be hard to find a way to share our gestation with one another, we have been carrying each other for years". The video points out how reproductive labour becomes globalised through childcare policies. The text repeats itself in places, emphasising the repetitive stages of pregnancy. Csilla, draws her own pregnancy, at the time of the film's screening into a network of references as we move from the images, to the text to the apples on the ground. Subverting prenatal exercises we are asked to pick up an apple and roll it around our pelvis. The presentation is punctuated by the gentle cries of a baby in the auditorium.

Barby Asante: I was struck by the quote, ‘Let Every Pregnancy Be for Everyone”. In 1995, when I graduated, I was also pregnant. I was looking for works about motherhood. I was looking at Post-Partum Document (1973 - 79) by Mary Kelly. The work I made was a documentation of my pregnancy and I was struck by the scrutiny you have as a pregnant woman. I was struck by this as an ethnography of the woman's body. . .  And the authority of the medical profession in how it pathologizes a woman's body. So how do I deal with a need and desire to maintain privacy over my body? It was a love letter to both your children; the one you already have and the one-to-be. /  I’m in conversation with a friend struggling to get pregnant. As a black woman there are ways that you are not seen as a woman as you become pregnant. It’s a deeply subjective experience.

Momtaza Mehri: I felt you lent such a warmth to your critical engagement with this theoretical text and gestational labour. It reminded me of the work of Selma James (founder of the International Wages for Housework Campaign and author of The Power of Women and the Subversion of the Community); and Italian Workerism, bodies of writing about social reproduction. I was thinking about the loneliness of that labour. What you’ve done here has opened that up. It really invites me into that experience. /  I was reminded you don’t have to be a mother to participate in mothering. ‘Mother’ is such an expansive category and it can be articulated in such flattening ways. How do multiple forms of care operate in relation to your presentation? I'm thinking of friends I know who work as nannies in France and the fluid social dynamics  they grapple with as educated immigrants in a role of service and deep historical unease.

Lisette Lagnado: Again I return to ‘How to Mend: Motherhood and Its Ghosts’ by Iman Mersal, but also Donald Winnicot’s writings on one's sense of self. . . the idea you don’t want to feel like a vegetable. / We don’t give birth to a human, but to life. This goes beyond the tyrannies you have to swallow to be a mother. In the first experience you articulate a fear that you might have to sacrifice your life and then it becomes clear that a vegetable is life. You’re talking about biodiversity in the arrangement of the vegetables. Maybe it was not for us but for them.

Csilla Klenyánszki's "Bearing Fruits" was presented before live audience at the Posttheater in Arnhem on August 26th.