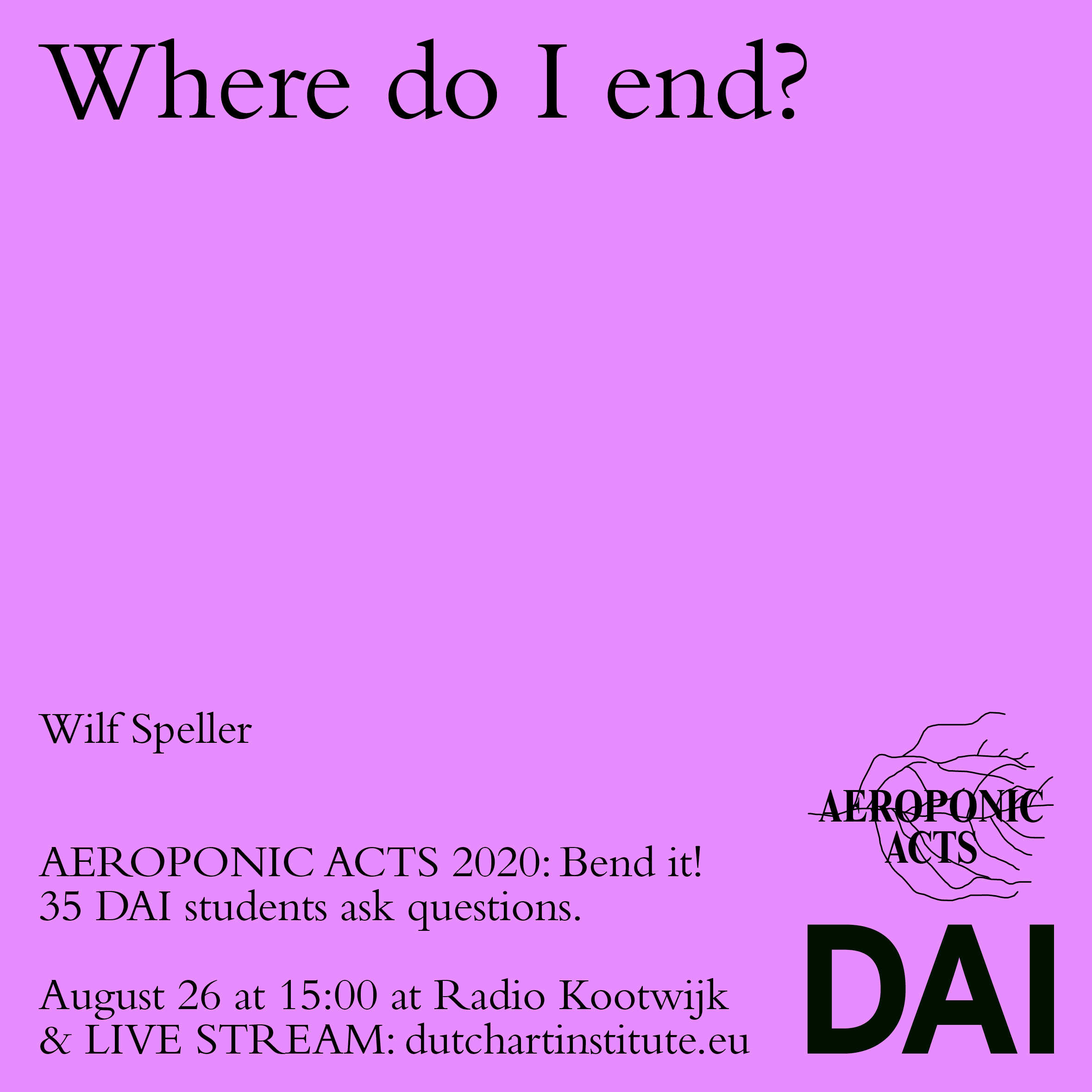 Here you will find the documentation of Wilf Speller's presentation as filmed by Baha Görkem Yalım. The written report is by Bethany Crawford and it includes a summary of the comments by esteemed guest respondents.

Wilf's question: Where do I end?

Wilf's introduction: The right index finger is a “controller”. The right middle, 4th and little fingers are “grippers”. The thumb has to perform both gripping and controlling actions requiring careful design of the thumb rest and rear of camera controls.

The best place for dead skin is in the folds of the body. In the joints. There’s more skin there because it has to flex. Stretch for the movement. To accommodate it.

Bethany's report: Speller’s surreal double-channel moving-image work, through methods of body horror, introduces critical propositions of ‘digesting the institute’. It begins with endoscopic images of a body’s internal tract and a choral soundtrack, transitioning into a 3D rendering of body parts. A robotic voice narrates the functions of human hands, periodically interrupted by static pulses as if channel’s being changed. The audio-visual channels kaleidoscopically alternate and rupture between the 3D hands, clouds accompanied by guided meditative choral singing, 3D rendered trees and endoscopic images. The audience is encouraged to feel the presence and movements of their bodies. The audio shifts uncomfortably in pitch and speed as the work details the bodies of buildings and the bodies within them. The visuals introduce a CGI rendering of Radio Kootwijk that gradually disassembles into the fleshy pink of endoscopic images. The narrative navigates concepts of the dissolution of bodily boundaries, inversion of internal and external and the collapse of material and theoretical limitations.

Amal Alhaag thought a lot about the blackberry thumb, the genealogy of these kinds of gestures, and the washer woman’s brain, feeling she really joined the journey with the work and took side steps. The sound, meant to be soothing, was manipulative in its association to the binaural mediative sound that entered Western history. She found the artist’s question, ‘where do I end?’ compelling as a move into the idea of the meditative skin, and the skin that expands or the multiplicity of the skin, as a physical embodiment and as a CGI skin. She was fascinated with the idea of buildings that could be built with skin, which skin to take upon when dismantling these kinds of patriarchal and colonial buildings, like the one they were in. There was a suggestion that it could be a plastic or elastic skin rather than a human related skin, she said. She brough up Doris Sung, who’s architecture considers how people reimagine the possibilities after ending this world.

Ana Teixeira Pinto questioned how digits, or fingers, connected to code instantiated with the visuals related to the rendition of the hand that reminded her of the electromagnetic spectrum, or X-ray, as first a skinless hand. Mathematics is not based on Greek mathematics, she said, which is just geometry; it’s not Western in origin. How then does one connect that to code? She asserted that the introduction of Arabic numerals used in digital code conflating the one and zero with on and off includes questions of the history of cinema and animation. The work made her consider architectural models and the flows within the environment as a form of soft coercion that manage how populations circulate.