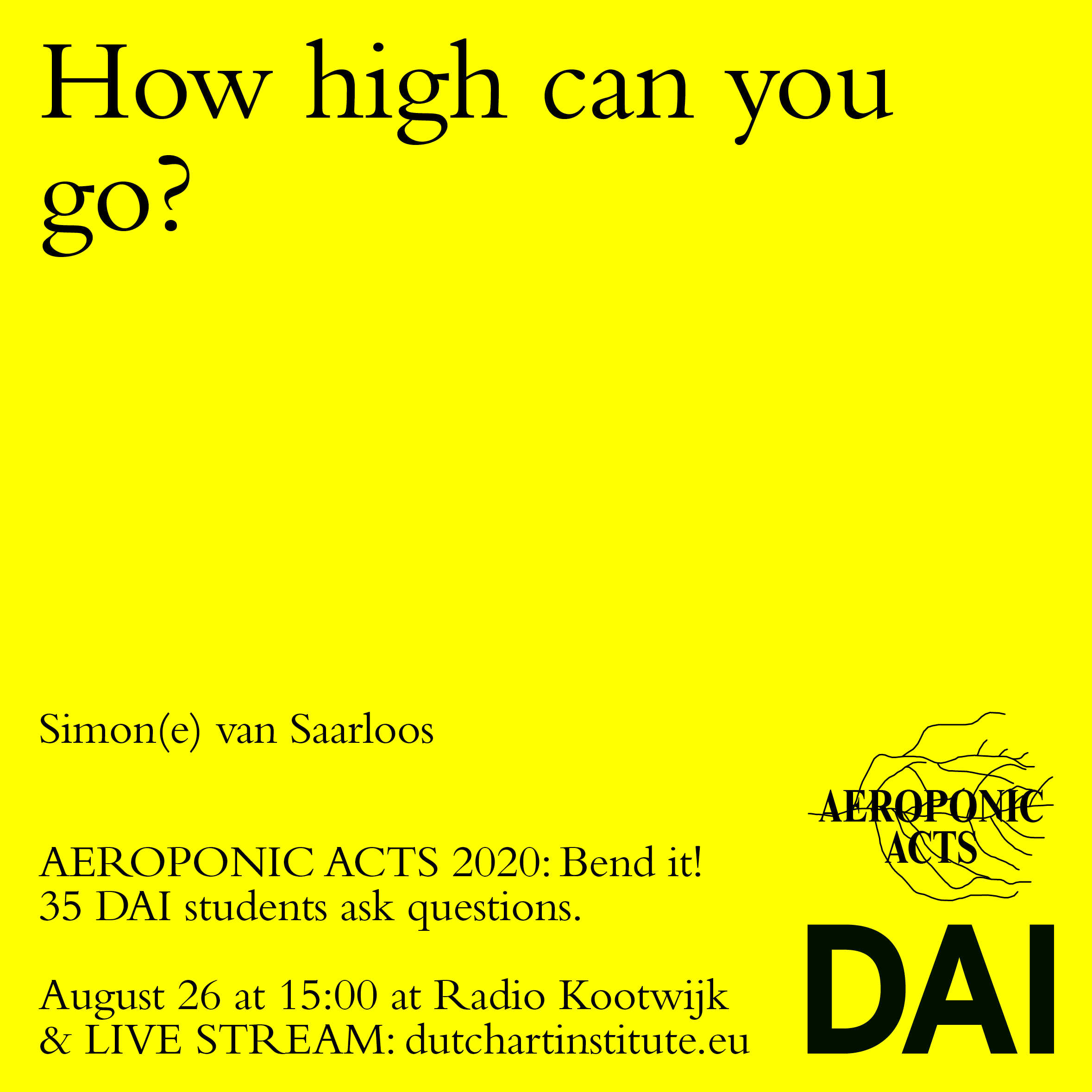 Here you will find the documentation of Simon(e) van Saarloos's presentation as filmed by Baha Görkem Yalım. The written report is by Bethany Crawford and it includes a summary of the comments by esteemed guest respondents.

Science Without Man: the musical

Simone's question: How high can you go?

Simone's introduction: “Does anyone ever sing in the hallways of this institute?” I remember asking Prof. Dr. Ben at the start of my 3 month artist residency at a nanoscience institute. Ben said “no, maybe you’ll hear someone whistling, but singing would be too disruptive.”

Ben and I talked about being a person of color in the white, rational, masculine space of science. He said he’d rather render questions of race unimportant, “it gets too uncomfortable,” he added. Weeks after my residency ended, he sent an email. He was thinking about quitting. “Questioning,” he wrote, “is contagious.” I’d like to think singing is too.

Bethany's report: Van Saarloos enters the deconstructed-musical-theatricalization of a scientific presentation wearing a white laboratory coat, pacing and holding the gaze of the audience while singing of their ‘demonic plan’. His initial excitement to begin a residency at Kavli Institute of Nanoscience, Delft was met with disappointment in finding the micro perspective all too familiar. She then questioned how the accumulation of knowledge constitutes scientific ‘facts’, and the intersectioning of this knowledge with dominant oppressive structures of nationalism, racism and patriarchal practice – propositionally presenting the potential of thinking from the ‘bottom’. Methods of transparency within a formal deconstruction of the musical performance highlight singing as a generative mode to think through knowledge sharing via multiplicities within tone, rhythm, time, velocity, and the necessity for both bodily and mental engagement with it as a process. He brings in collaborative engagements with the audience and musical performer Joy Wielkins, performing how knowledge is a rhizomatic process of incorporating the complexities of experience and understandings within the collective.

Adam Szymczyk appreciated the connection between nanoscience and the knowledge and intuition that was required within the piece as an embodied research presentation and foray into the world and techniques of the musical genre, mentioning the artist talking with the singer about protecting her voice as her money-making tool. He related to this ‘disenchanted infant’ in us that becomes like a science in its own right to elements of musical notation. Van Saarloos spoke about music in a way that was not only intuitive, he said, noting that musical knowledge and knowing is also a technique and formula due to music not just being a form of expression but an industry. Szymczyk concluded that in this performance, from someone looking at the musical, we learn to construct our own toolbox.

Amit S. Rai found it a joy to listen to and watch. He appreciated how she presented as a white person but encountered black radical thought and came back to black liberation as integral to what she did in the performance. Her attempt to disrupt different kinds of hierarchies such as family and knowledge, brought him to ask: ‘How can we disrupt the frame of the musical?’ He found Van Saarloos and Wielkins’ vocal experimenting extraordinary, interested in what the artist did in science, confident she would turn it around, which he said was so important as a critique in the black radical tradition. ‘Open and curious’ was a phrase that served the work, he said.

Flavia Dzodan thanked van Saarloos for their presentation and focused on the aspect of science the artist is trying to explode, which relates to her own research into how algorithms shape and continue a project of colonialism from the sixteenth century on. Algorithm takes its name form Al-Khwārizmī, the Muslim mathematician and astronomer, and is now embedded in our technologies, she said, adding that astrology, once a mathematical science, is now considered ‘anti-science’. She went on to explain how linear time is a legacy of enlightenment, with time itself a colonial construction, and that indigenous ways of measuring time were erased to implement homogeneity with the imposition of the Gregorian calendar and universal concept of Newtonian chronology. Newton, however, she noted, was interested in sacred geometry, geomancy, the occult, which was omitted from the presentation of his works. His work is used to devalue esoteric knowledge, even though that knowledge is inherently present – non-hegemonic thinking can also come from inside it.

Simon(e) van Saarloos's Science Without Man: the musical was presented at Radio Kootwijk.