Zoi Moutsokou: Isn’t their fluid kiss hurting you as we re-treat? 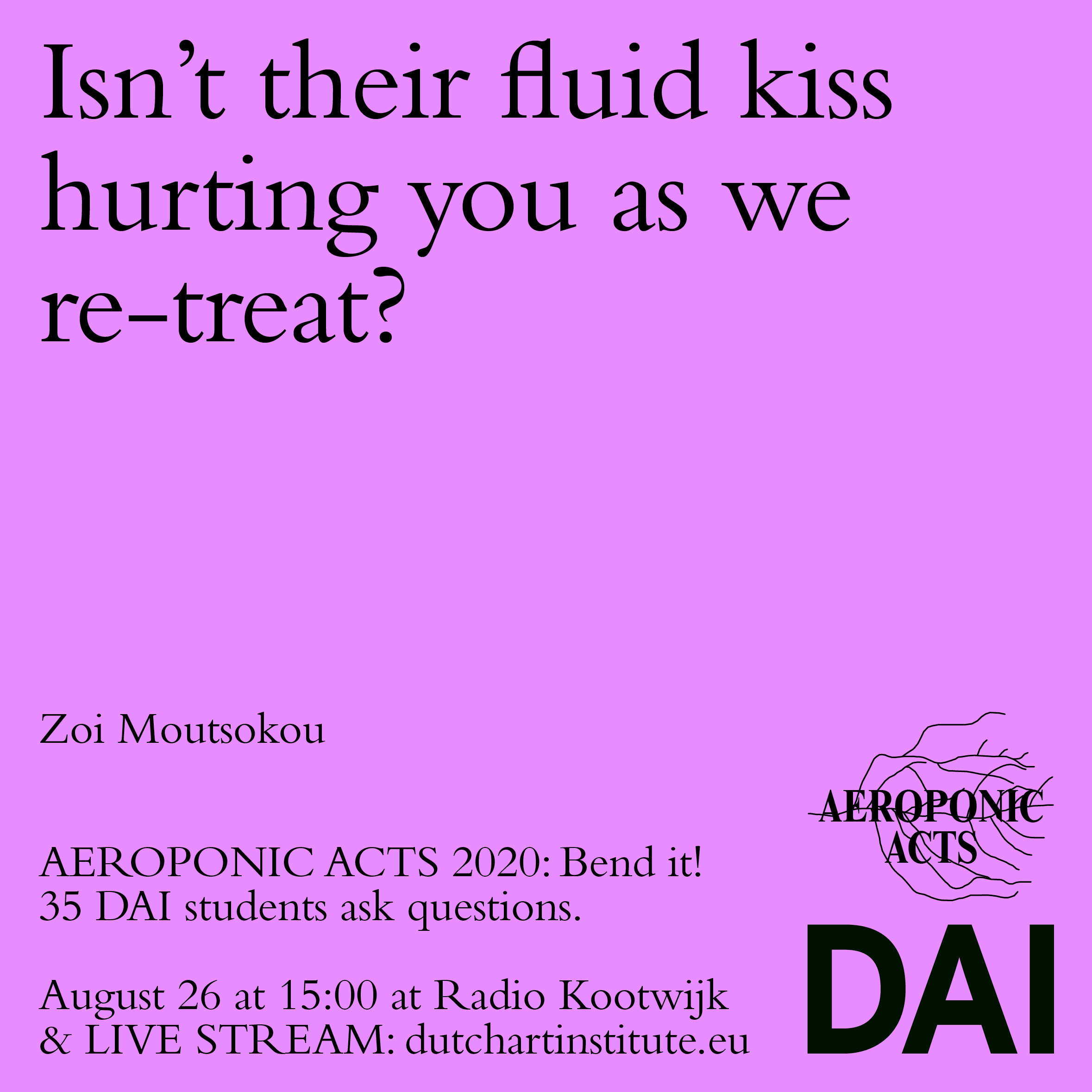 Here you will find the documentation of Zoi Moutsokou's presentation as filmed by Baha Görkem Yalım. The written report is by Bethany Crawford and it includes a summary of the comments by esteemed guest respondents.

Isn’t their fluid kiss hurting you as we re-treat?

Zoi's question: Isn’t their fluid kiss hurting you as we re-treat?

Zoi's introduction: An interwoven story of bodies, fluids, friends and sea urchins friends exploring place and space. Inhabiting different localities or in displacement, in a state of exhaustion, is singing and kissing, is retreat an actualised space for care?

Bethany's report: Moutsokou Skypes in for a live presentation from the mountains in Greece, where she is outside and in her ‘comfortable spot’. She references the geographical co-ordinates of this place, providing taxonomical data from that particular location where she is ‘in retreat’. She gives a performative reading of a text, traversing notions of retreat and self-care. She equates the stresses of the body with the stresses of the Earth, highlighting essential care as reflexive in caring for the other. She details alternative and traditional modes of bodily knowledge and medicine that understand the connectivity of the different body parts, extending the body to incorporate the worldly body through breaking down boundaries, and the skin as boundary. She poses questions of thinking through the retreat as a return, or a respite, a wave that withdraws and allows for the healthy living of rockpool-based ecologies, as the natural cycle of care. She finishes with a poetic reference to the potentially fatal kissing of sea urchins as an exhaustion of ‘possibilities by crossing boundaries, but at least they kissed’.

Amit S. Rai found it beautiful, taken with the concept of letting the fluids flow. He thought the artist’s poignant words were a profound meditation on what it means to retreat and what retreat implicates in the body, affecting especially in the questions of retreat is in relation to ecology, noting political and practical connections. He pointed out that she was literally outside, so that we experience her situating the displacement. He thought about exhaustion in a meta way, and how this kind of practice takes one’s imagination to a certain limit of exhaustion.

Ana Teixeira Pinto connected the artist’s reference to affect theory within motion and bodily fluid to animal spirits as living entities that can be inhaled to influence mood and the Aristotelian thesis that you don’t possess a soul but participate in it. These theories connect to a notion of being that is not privatized but rather shares porous boundaries with other entities. She mentioned Samuel Smiles’ book Self-Help written in 1859, the same year as Darwin’s On the Origin of Species, in reflecting on the privatization of the self in relation to competition with the environment and the other. Collectivity is always pathologized because we don’t have examples and phenomena, she said. In consideration of the space of mediation in the work, she contrasted the wellness market as a consequence of the mental infirmity of capitalist culture, which enrolled the school of Zen Buddhism. She also found the sea urchins really interesting because the inside is the outside and inverse.

Amal Alhaag really appreciated this unpacking of the retreat within the background, and asked who’s afforded the retreat, to be exhausted at this time, retreat as a settler project that takes the affordances of time where everyday life is commodified and reduced to imagery. The text brought to life in her performance spoke from a place of authority as a person that had been there for a while and had been pondering and marinating with all these thoughts. She referenced Audre Lorde’s writing about self-indulgence and self-preservation, or self-care and found it interesting that the artist found a way to manoeuvre between these two. She said the artist made some quite hardcore statements, pointing to ‘space is dead but place lives’, which made her think that space is the place and how to collapse this by doing sci-fi work.

Zoi Moutsokou's Isn’t their fluid kiss hurting you as we re-treat? was presented at Radio Kootwijk.