Maxime Gourdon: A continuous present, beginning again and again, with tenses such as past and future 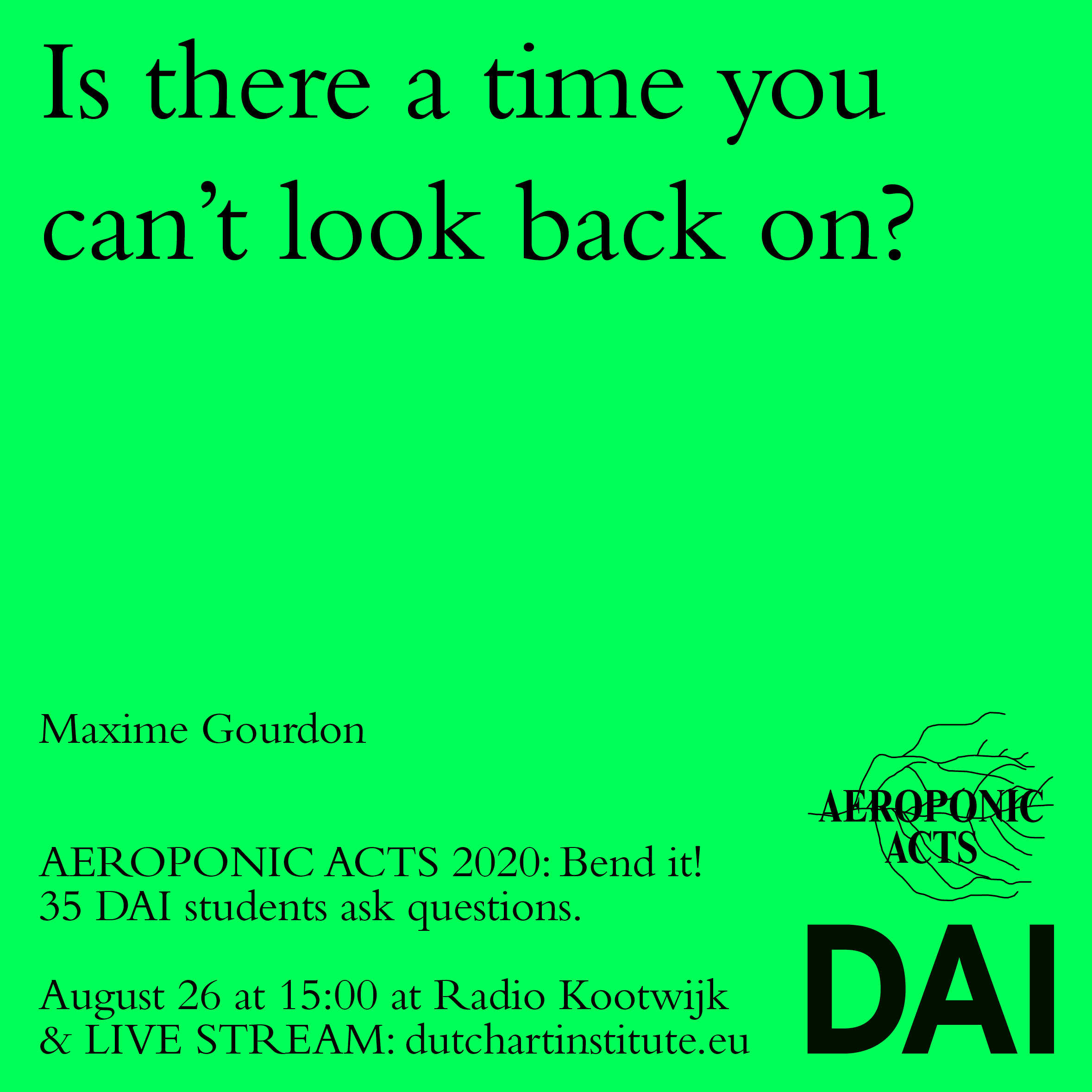 Here you will find the documentation of Maxime Gourdon's presentation as filmed by Baha Görkem Yalım. The written report is by Bethany Crawford and it includes a summary of the comments by esteemed guest respondents.

A continuous present, beginning again and again, with tenses such as past and future

Maxime's question: Is there a time you can’t look back on?

Maxime's introduction: Perhaps no one ever looked there, no one caressed that place with their eyes before.

And you would be the first, sending a look from the past.

A look sent to the future, a look that could not be given back; you touch with your eyes, you look — doing that, you read what happened there, or what is going to happen, you inform the future of what happened when you looked : a continuous present, beginning again and again, with tenses such as past and future.

Bethany's report: Gourdon Skypes in for a live streamed presentation and reads a text, inviting the audience to move through the room and find a space to attend to by sitting. His instructional tone recalls expanded cinema and self-generative imagining – a guided meditation in which the bodies within the space are encouraged to interact with the materials therein and think about automatic behaviours such as breathing, blinking and swallowing and the disruption caused by our awareness of them. While repetition exhausts meaning, it isn’t the words or behaviours that change, but their perception and engagement, providing a basis for the artist’s thinking propositionally around rupturing perceptions, conditionings and notions of temporal and spatial realities.

In the performance that drew attention to the sense of the room and how the space conditions us, the gaps between the voice and the words reminded Adam Szymczyk of the erasure of meaning once a message is sent.

Ana Teixeira Pinto thought the delay in hearing the audience’s responses was very fitting and that Gourdon’s reading and topic brought in Jacques Derrida’s destinerrance: when a message doesn’t reach its destination it opens up the possibility of a message never reaching its destination, so that the message roams with no reception. The artist’s idea of the ownership of Orpheus as a message that keeps getting passed on interested her, as well as the form of the love letter in both performance and text.

Amit S. Rai congratulated Gourdon on being a brilliant writer and having a hypnotic voice, which he joked could be dangerous. ‘What are the conditions of a reminiscence?’, he asked, feeling the experience of listening to the artist’s words was an exercise in mindfulness – a now global business that is a new orientalism and labour discipline. The performance asked after the mental and brought the experience back into the body, said Rai, who wondered if here bodies were beyond representation. It reminded him of Nina Simone’s song ‘In the Dark’.

Maxime Gourdon's A continuous present, beginning again and again, with tenses such as past and future was presented at Radio Kootwijk.