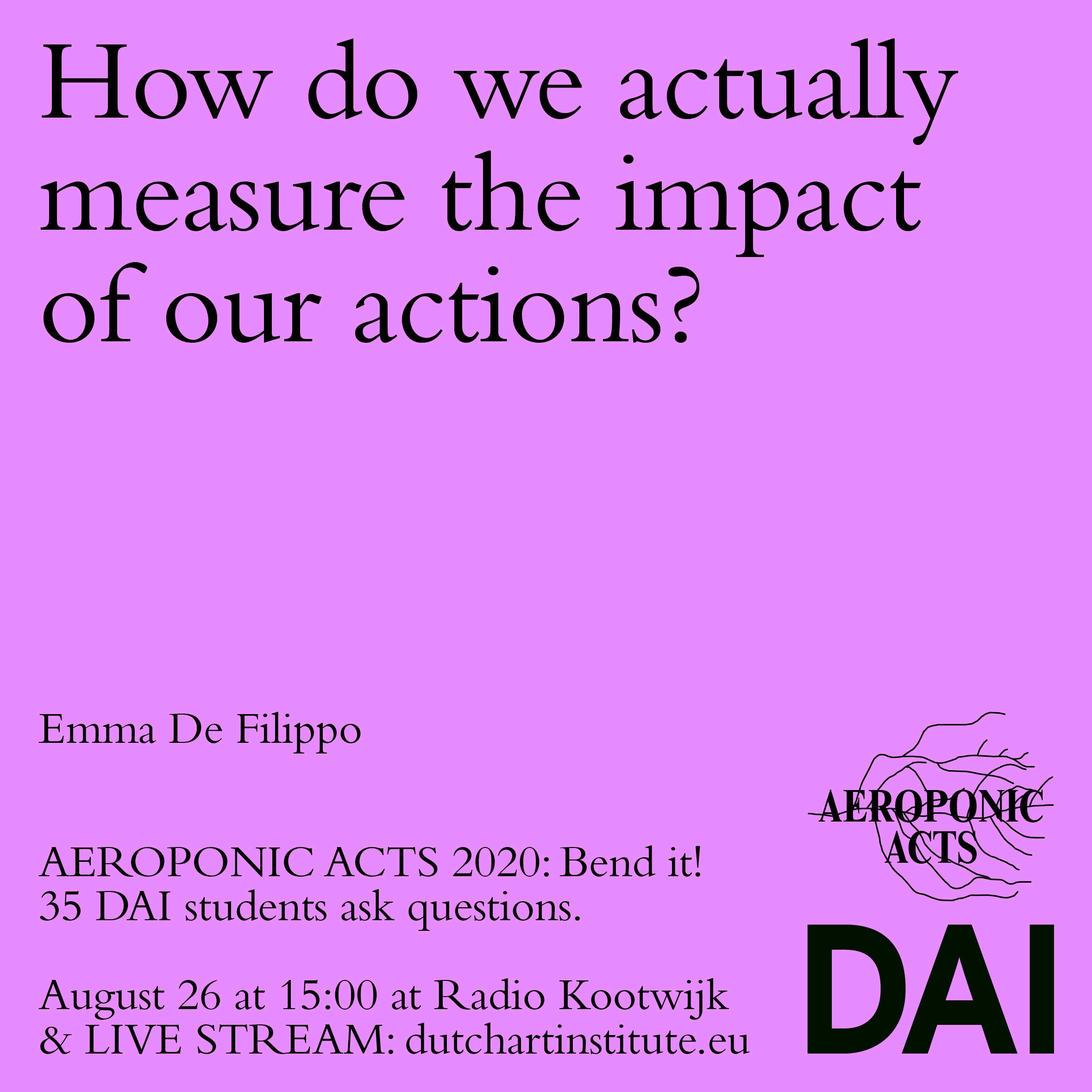 Here you will find the documentation of Emma De Filippo's presentation as filmed by Baha Görkem Yalım. The written report is by Bethany Crawford and it includes a summary of the comments by esteemed guest respondents.

Emma's question: What if history was a wave and I was part of the bodies it crosses ?

Emma's introduction: Pulling an image from one's mind to help understand entanglements and consequences of one's actions. Here building one to become part of a broader visual vocabulary. How do we actually measure the impact of our actions?

Bethany's report: The screens display an image of a person standing in the dark with only their neck and shoulders visible, illuminated by the blue light of their earrings. Filippo live narrates a text over the images, tracing the multiple significations and identifications within the subject of the ‘I’. She delineates the ‘I’ as a connection point or line dependent on its connections for contextualization and meaning, as a transition into thinking through the wave: ‘what if history was a wave and “I” was part of the bodies it crosses?’ The performance engages with the potential for shifting perceptions through sound and light waves. As the text continues with a poetically theoretical investigation into the physical manifestations and behaviours of the wave in oscillation, equilibrium and resonance, a soundtrack emerges from binaural beats. The artist questions ‘if the waves carry energy, and this energy shakes every I, should I – the main subject – spend this energy trying to continue what I was doing, or should I try to build from what just shook me?’ The lights on the earrings begin to flash, strobing and manipulating the fragment of the performer’s body seen on the screen into a multiplicity of hallucinatory visuals, reiterating how light and sound waves can alter perception of what is seen, reveal what is concealed and recontextualize the visible.

The presentation made Amit S. Rai think the nature of the line, and how a real true labyrinth is the line because time itself is fractured, a way of thinking about the paradox of a subject that is constantly fractured by time. He thought this was another way to think about resonance, a word Filippo did profoundly excellent things with. He asked: What does it mean for a resonance to pass through a body and collect bodies into a collectivity? To think about the non-linear dynamics of the body, he said a body is a non-coinciding resonant unity, constantly in motion and never coinciding with itself, yet with a resonance within as the expression of unity. He appreciated the artist’s reading of history and the political in these dynamics, intoning the self-organization of the body as an ecological convulsion in a dynamic interaction with its ecology producing trajectories and vectors of becoming, which he felt Filippo posed wonderfully.

Ana Teixeira Pinto thought the artist brought two things together: the question of ‘I’ as a person and the vibration of the sonic scape, which exists because of industrial technology. When the latter was introduced it created a great deal of trauma to the collective body, she said, noting an 1875 medical treatise on ‘concussion of the spine, nervous shock and other obscure injuries of the nervous system’ and a quote from American scholar Matthew Wright: ‘A constant vibration easily and sneakily blends into the background where upon it can do its malignant work by stealth.’ She related this to the death drive, as an attempt of the organism to counter this excessive stimulus in response to the shock of industrial trauma. She found this idea of the resonance of the sonic scape and how you can immerse it as a malign element and to erase it really interesting.

Amal Alhaag found the process of listening as a way of thinking about tactile-techno, a gentle touching techno music that she felt said something about being a monster really coming along on this quest. She thought about vibration as a methodology of healing, although vibration is often seen as a way to destroy it also has the ability to repair. This made her think about repair and rejuvenation, and there was something irking her about the quest of the ‘I’ in the questions of how ‘we’ centralize, although she guesses the ‘I’ as part of the ‘we’ but somehow she could not think about the ‘I’ as something that is everywhere but moving between the ‘I’ and the ‘eye’ that is not centralized in this particular work. She found it nice how the artist broke down the rhythm, thinking about transmittance and frequencies, and how she thought a lot about measurements – why we need to quantify our actions. The performance made her think about the beat as punctuation, and as a potential wave that keeps coming.

Emma De Filippo's What if history was a wave and I was part of the bodies it crosses ? was presented at Radio Kootwijk.