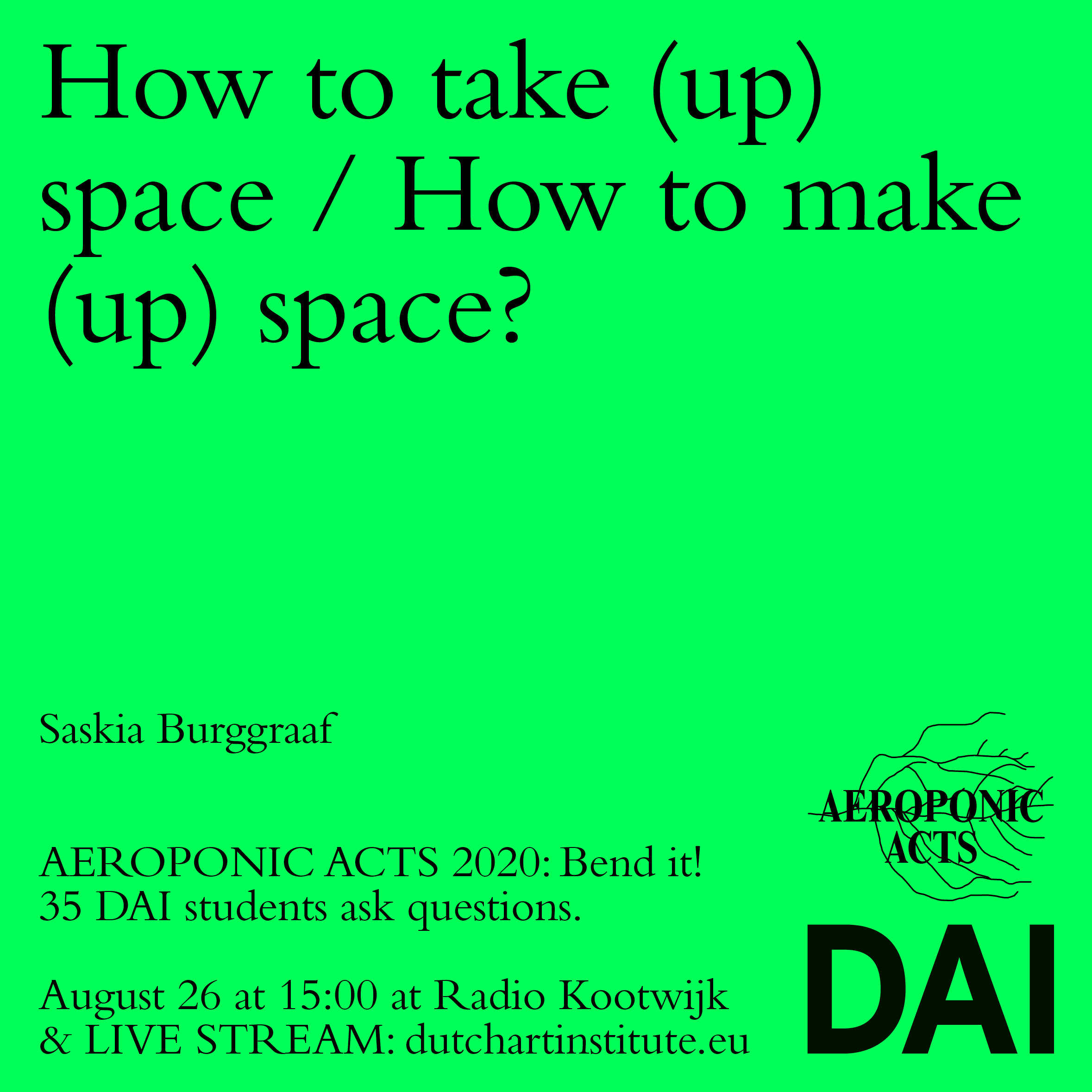 Here you will find the documentation of Saskia Burggraaf's presentation as filmed by Baha Görkem Yalım. The written report is by Bethany Crawford and it includes a summary of the comments by esteemed guest respondents.

Saskia's introduction: A temporal audiovisual echo of our collective feedback loop, and some other distortions of the locus. Preferably resisting the ordered history of patriarchal capitalism. Just in case, Saskia added some layers over our pre-shaped surroundings to see what can be re-routed. It's supposed to be a synchronous vibration of neighboring or remote objects and subjects by feminist geographical theorization on collectivity, or maybe it's a remix of spatial, social- and legal organization and other contradicting senses of matter, but you're never really sure. What is certain, it's a cut-up collage to take a piece of our collective intelligence to our homes.

Bethany's report: Small black boxes lie on the ground within a three-screen installation. The artist thanks her collaborators for their assistance in producing the work and in generating the soundscape, which she introduces as a composition of the feedback from the previous kitchen presentations of her second-year peers, in a feedback loop of feedback. She invites the audience to move around, engage with the work and to look at the details, contextualizing the interactions with questions: ‘Do you see a space where you could feel comfortable? How does it make you feel to be in the presence of other people? How do you feel in the high ceilings?’ Music with deep base fills the space as the audience moves between the three image sequences with a collage of buildings in various states of dereliction and natural reclamation between the cracks, showing the potential in decay. Some members of the audience trace the lines of the floor tiles while others fall into the rhythm of the music and dance. When the music stops the audience is invited to pick up the black boxes, inside of which are printed soundwaves of feedback to second-year kitchen presentations. The input and output of the artist’s peers and audience produce a collective work, in a practice of continuance evidenced by the unceasing performance, as the audience continue to discuss the soundwave of feedback and generating feedback.

Amit S. Rai thought the way the artist opened up the space for exploration was amazing. He stood and watched people as they interacted with the space, boxes, images and each other and noted how the screen drew people’s attention and showed how these can dominate a space. He was interested in the artist’s nuanced questioning of social relations in space and enjoyed how the experiments took place in a space that historically didn’t lend itself to experiments, also enjoying the way people moved and danced and the artist’s phrase: ‘the multiplicity of spaces in one’.

Flavia Dzodan echoed Rai in enjoying the multiplicities, blown away by the excellently executed soundtrack. She found the video mesmerizing and congratulated the artist on successfully creating the atmosphere and the mood. It is hard for artists to create moods, said Dzodan, because it’s evocative. She encouraged Burggraaf to give herself a pat on the back for delivering something so powerful so late in the day. On the artist’s question, ‘How to take (up) space / How to make (up) space?’, Dzodan said sometimes doing is enough without using the colonial mentality of taking space. She liked how the presentation created space in an emancipatory way, as an antithesis to the capitalist taking of space.

Amal Alhaag agreed with the sentiments of the other two respondents, and felt it necessary to be doing some spatial embodiment and movement when time has rendered our bodies a bit useless – sitting throughout the presentations. In Covid-19 times Alhaag said it was interesting to find ways of being in proximity with each other and to keep distance, particularly the notion of remix as methodology, and the remix with moments of care. It’s nice to a have a moment of closure when you’re studying with a group, she said. The images of landscape depicted like a concrete jungle were interesting, she added. To find buildings where nature has been able to take its course and the buildings have lost their purpose in a place where renovation happens so quickly, bringing up failure as a response to the efficiency of the capitalist regime. On how to take up space and make up space, she asked: ‘What does it mean to not centralize your own desires to take up space but to hold space for one another? How do we think about it differently to generate other ways of being together?’