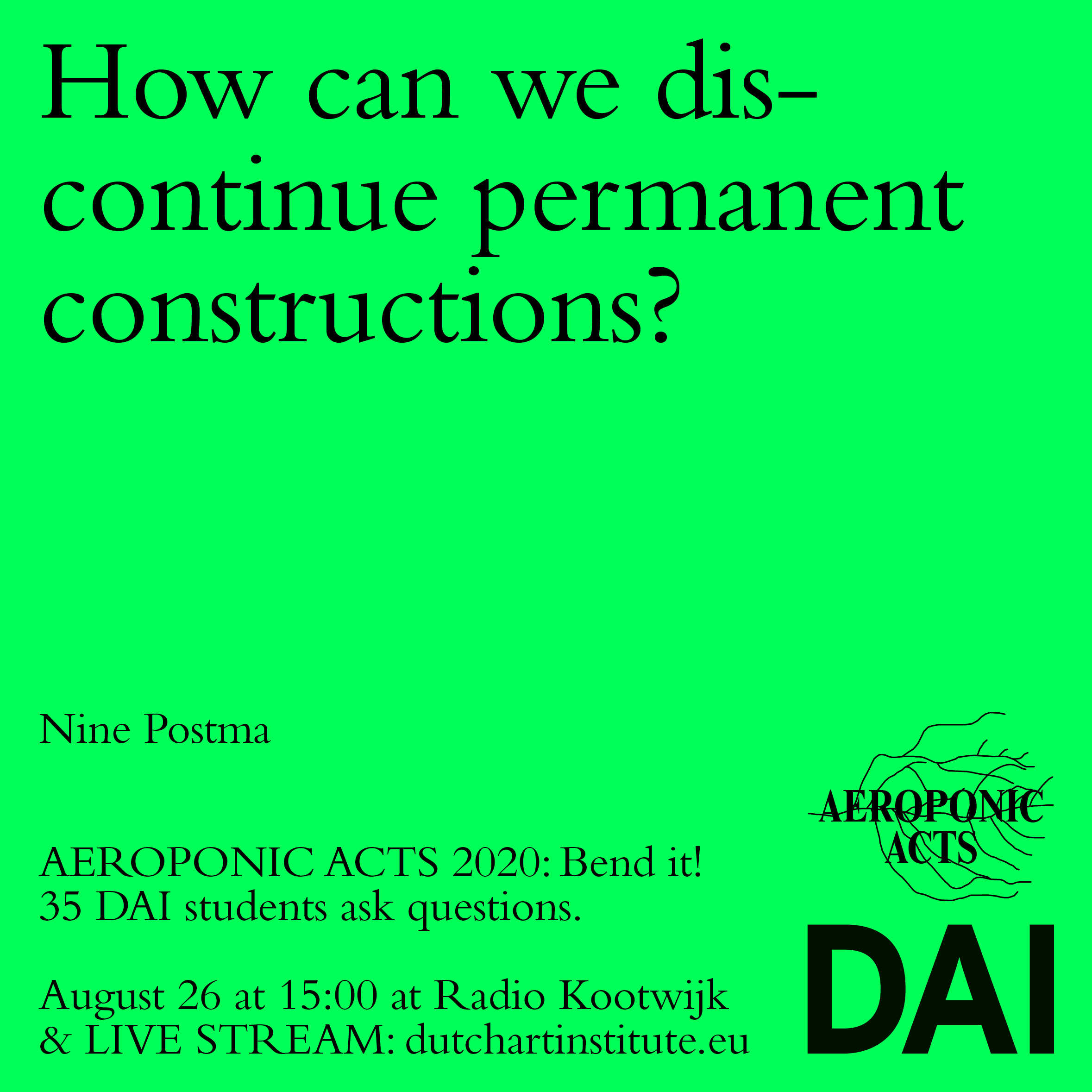 Here you will find the documentation of Nine Postma's presentation as filmed by Baha Görkem Yalım. The written report is by Bethany Crawford and it includes a summary of the comments by esteemed guest respondents.

The auction where concrete doesn’t burn

Nine's question: How can we discontinue permanent constructions?

Nine's introduction:"Today you will be confronted with the opportunity to buy three remnants/pillars of Radio Kootwijk, during the auction where concrete doesn’t burn. Listen carefully and assess your best bet. What voices will you follow? Which structures will you rebuild?"

Bethany's report: Postma enters the performance space in smart business-like attire and stands behind a table that displays three items. She tells the audience this is a charity auction and invites them to bid on the items with the ‘postmaney’ currency in envelopes on their seats. As she presents each item, ‘remnants/pillars of Radio Kootwijk’ – the ‘how to make your own everlasting monument-kit’, the ‘this could be your floor and more-kit’ and the copyright to the phrase ‘hallo bandoeng’ – she humorously interweaves a meta-structural critique of  the history of the building. The interdependent structures of finance, speculation, colonialism, the third sector industry, trade and ownership are interrogated through the auction format. Potsma questions the cost of these monuments and their continued reproduction that present as permanence, and how to remove these ‘foundations’ to give way ‘to the natural shift of the landscape’.

Amit S. Rai thought it was a great performance that powerfully presented the colonial history of the building to encourage the audience to think of the processes of violence that have gone into its making and functioning. He appreciated the laughter and the questioning of how to extract value from this building, which is part of the colonial legacy. He commented on how Postma brilliantly dealt with the Netherlands as a country dealing with its violent legacy and potential erasures. Rai asked what a permanent structure is, noting that colonialism had imagined itself as one that would rule for a thousand years.

Flavia Dzodan thanked Postma for working situationally, bringing the building into question so pertinently. She really liked the questions but wasn’t sure until the end what ‘permanent’ structure referred to, which she had misunderstood in the context of sustainability. Postma brilliantly answered the question of what doing away with permanent structures means for sustainability, said Dzodan, through the ‘disassembling’ of the building as a metaphor, and thinking through colonialism.

On the theme of dismantling, Amal Alhaag said it made sense to contextualize the building, observing how well trained we are to understand and participate in capitalist rituals like auctions in a Western context, which raised the question: ‘How do we dismantle our own training?’ How to discontinue is brought about through capitalism’s speculative way of building, she said, where nothing is permanent anymore in response to the neoliberal market economy and need for returnable profit. She referenced the deal imposed on Indonesia by the Netherlands in exchange for its independence, which plunged Indonesia into huge debt, and how the payment plan helped to rebuild the Netherlands after the war until Indonesia revoked the deal. Alhaag reflected on how to bring forward the positions of the colonized.

Nine Postma's The auction where concrete doesn’t burn was presented at Radio Kootwijk.