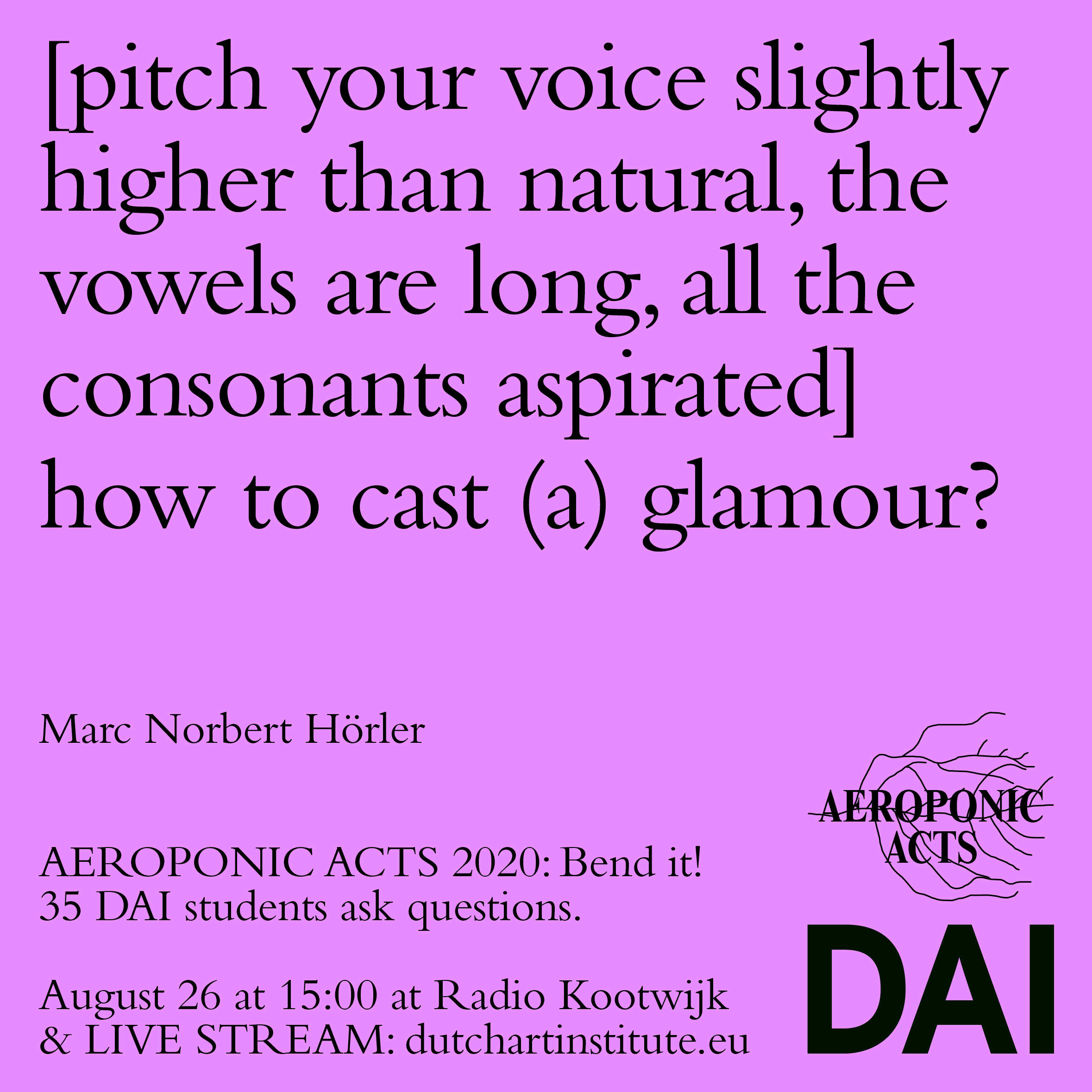 Here you will find the documentation of Marc Norbert Hörler's presentation as filmed by Baha Görkem Yalım. The written report is by Bethany Crawford and it includes a summary of the comments by esteemed guest respondents.

Marc's question: [pitch your voice slightly higher than natural, the vowels are long, all the consonants aspirated] how to cast (a) glamour?

Marc's introduction: A phoneme is the smallest morphological unit to change a word’s meaning, resulting in a sometimes spell-like imagery and alliterative conjuring. grammar and glamour are diachronically retracing the frictions of phonemic poetics, the historical contingency of vocabulary and its world-making potential via intentional phonemic attention and transmutational alchemy. these voicings resonate paralinguistically on sensory levels beyond the visual and aural, transgress grammatological confines and reach for the glamorous craft of the tongue.

Bethany's report: Hörler sits with a microphone, laptop and loop station. An aromatic scent lingers in the performance space. He introduces speaking in Swiss German, and continues into a deeply moving singing component. The performance feels like an operatic invocation, inviting possession as the performer’s vocals range and embody different subjects and subjectivities as the captivated audience reverberate with unseen presences in a tangible manifestation of temporal intersections and in-between spaces. The intensely experiential performance is transcendental and bodily, enacting a material and psychically embodied sensation of collective consciousness.

Amit S. Rai said the artist’s creation made him appreciate the resonance of the cavernous room. He loved the phrase ‘a transmutational alchemy’, which he said the artist embodied and made all of us embody. It made him think about this word and what it meant materially through the practice of sound and of the paralinguistic, to create the conditions of resonance. He felt the artist’s connection to his technology enabled us to think of the conditions for resonance, a transcendental proposition. For him this brought us to the very heights of philosophy and creation. He felt it important to mark the limits of the grammatological that intends to capture the voice and is rooted to meaning.

Ana Teixeira Pinto complimented the artist on an amazing performance, and brought in Elizabethan chanting, which sounds like a form of wailing or crying, in this heavily decorated environment meant to muffle the sounds of pain from the people being tortured in the catacombs below, relating to this dimension of culture that always incorporates the repressed. She thought it was really poignant that the artist brought this performance in this space, because everyone was trying to find the vocabulary to voice this grief, and everyone was struggling with the discomfort of being in this building and what it represented.

Flavia Dzodan thought if there was such a thing as a secular mass this is what it would have felt like. She felt that it was a very spiritual moment, not religious but spiritual at once both mystical and mystifying, a testament to the artist’s talent.

Amal Alhaag thanked the artist for this work and references having read the abstract and wondered if he was describing a creole, or creolization, interested in the language at the beginning. She thought about stretching language, and how the voice has the capability to invoke image. It also made her think about the sonic intervention that allows us to be present in the mess of the current situation, and the mess of the space, and the mess of the exhaustion and to be taken alongside on a stretch, like a stretch of time but also a stretch of the possibilities of what voice can do. She thought about the different forms of using wailing or keening, of performing mourning, and how this was poignant for this current moment.

The presentation made Adam Szymczyk think about the opera he would visit as a kid, where they would always hand out librettos, because with a libretto you could figure out what the narrative was in the singing and the abstract nature of opera in which you are expected to master sound though it’s hard to follow the content. The diva had a very special role, often the one who is meant to die in the last scene. He echoed Rai’s sentiments and wished the artist luck in achieving the heights at which he aims as it is a dangerous path.