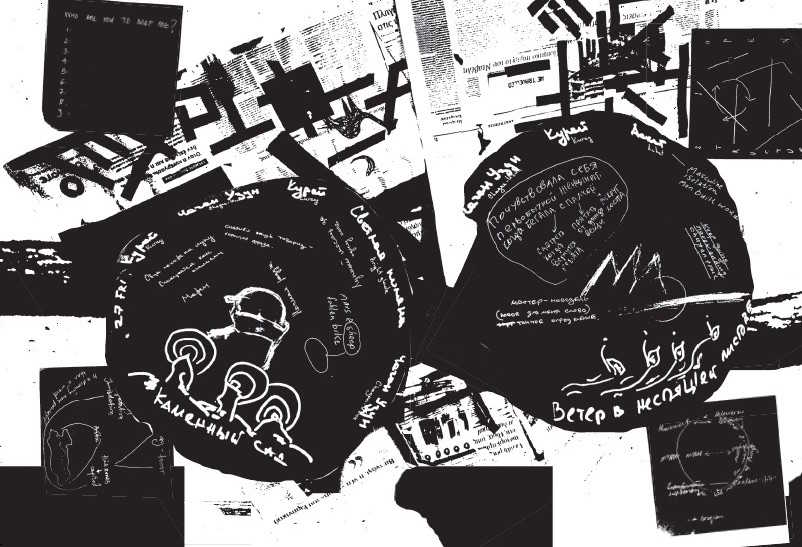 Nam June Paik: You have often been talking about the Eurasian continent, the unfamiliar geographic concept?

Joseph Beuys: Cuz there was no Gobi desert in the old days . . . There was thick forest instead. Perhaps it’s about 100,000 years ago when the division of Asia and Europe was made at the Gobi desert?

Paik: Why were rabbits worshipped among Mongolians?

Beuys: Rabbits are the fastest. They fly like cannon balls in the vast steppes.

Nam June Paik (1932-2008) not only befriended his contemporary, artist Joseph Beuys (1921–1986), but also took Beuys as the subject for several works by him. In the conversation above, Beuys refers to the geological concept of Eurasia: the Eurasian tectonic plate, covering most, though not all, of the Eurasian continent, neighbors the Amur tectonic plate along the fault line of Chersky Range, Lake Baikal, and parts of the Gobi desert. Beuys believed that his life was saved by nomadic Tatars when he was buried in snow after a plane crash on the Crimean Front in 1944, while serving in the German army during the Second World War. “Tatar” was a name applied to anyone originating from the vast Northern and Central Asian landmass.

Almost concurrently with Beuys, Paik himself made a number of works on Eurasia, in particular the Mongolian Empire and its cultural heritage. While advocating the use of new technology, he was celebrating prehistoric culture. He used the expression, “sci-fi into the past.” He also said, “I like thinking about [the] old past before the discovery of private property.” For Paik, video was a common community property, and the Silk Roads were a backdrop to imagining a trans-Eurasian non-capitalist market network. Both Paik and Beuys performed the figure of the shaman, however implicitly, which might have been a necessity for this time travel.

Paik added a footnote with regards to the above conversation; one that highlights once again how his and Beuys’ imaginations travelled along with the concept of “Eurasia,” defying the existing rules of communication and mobility. “It’s the common sense for us Asians that the rabbits live on moon, while it’s an absolute legend and apprentice for Beuys who lived in the village of the Mongolian Tartars. In the National Gallery in Berlin is a work by Beuys on the rabbits on the moon. At the backyard of his studio still live the rabbits who enjoy eating fresh Acacia leaves.”

Who are the contemporary Eurasians and what are the possible ‘Eurasian imaginative highways’ today? How do artists of today imagine Eurasia?  What makes us imagine and walk Eurasia?

Ancient petroglyphs with abstract patterns, or sometimes figurative signs, are dotted throughout the steppes over Eurasia. They bear witness to the spiritual world of the nomadic peoples, and sometimes are an inverted projection of the star atlas. There are also rich collections of preserved medieval paper scraps from places near the desert. They document divination practices, star atlases, and almanacs of the settled nomadic people—practices of negotiation with astral forces. As we dreamed of applying these old techniques to instructing life today, a friend said to us, deadpan, “But the stars they saw back then are stars from even further back in history because of the distance light has to travel—some of them might have decayed. The stars we see today may be the stars shining above the medieval men.”

'And we draw maps and represent the places where we collectively travel together.  At the same time, we draw the time of those travels—both the time of now and the times that we are teleported to in the mind. Our maps to be lived in, summoned, enacted, unmapped from the maps that guide us, hide us and maybe control us. Those “nomadic” travelers in company might then be imagined with maps of the human body with meridian channels. Their routes, with maps of cities, following a cosmological order. The landscape like that in 山海經 (Classic of Mountains and Seas), which documents mythical geography, some of which is believed to be real places, with mythical animals, and creatures with “supernatural” powers.'

Which real and speculative coordinates do you find yourself in? Are you ready to unmap in common?

At the height of scientific explorations of Central Asia during the second half of the nineteenth century, French anarchist geographer Élisée Reclus (1830–1905) saw geology and geography being mined for geopolitical leverage. According to Tamara Chin, Reclus proposed a “slower Silk Road”: “a geohistorical marker not of maximised commodity ﬂow but of humanity’s collective self-awareness of ‘forming one body with the planet itself.’” Incidentally, Peter Kropotkin, the Russian anarchist geographer who befriended and was influenced by Reclus, had contributed to the study of biology by proposing the idea of “mutual aid” instead of the Darwinian “survival of the fittest” as the principle underlying evolution. Both anarchist geographers explored the parallel territories of geographical movements and social movements, and attempted to debase social domination by creating self-organized bodies and communities.

In the wake of the demise of "communism"- or rather state socialism, have emerged "the commons" – that is what one might call communism-without ism.  Speaking of the commons (originally the English term for the communally managed land under the feudal ownership system in sixteenth century England) in our time refers to a broad array of forms of sharing, but further to a complex endeavor of intervening into existing systems: questioning what they are for, by and for whom they are made, and challenging the existing, often binary divide - between private ownership and public governance. between urban and rural, between east and west, between south and north, between women and men…. and so on.

While connected to democracy, the commons is different from it in the sense that it does not take for granted existing, representative, and hierarchical democratic systems. Deep in the commons are the earth and the mind. In this light, Eurasia appears to be a historical backstage as well as an uncoordinated matrix for the commons. It’s a context where ideological strata and resonating national strata are drawn, but whose vastness and transversality from one end to another offers the possibility for other kinds of movements and conjuring activities – we might call this Eurasian Commons.