Introduction to Art, Struggle, and the City: Athens and Istanbul

"Now we must examine the very terrain of the sensible on which artistic gestures shake up our modes of perception and on which political gestures redefine our capacities for action. I am neither a historian of art nor a philosopher of politics, but I work on this question: What landscape can one describe as the meeting place between artistic practice and political practice?"~ Jacques Rancière

"How do we fashion a new political imaginary from fragmentary, diffuse and often antagonistic subjects, who may be united in principle against the exigencies of capitalism but diverge in practice, in terms of the sites, strategies and specific natures of their own oppression?" ~ Susan Ruddick

This Roaming Assembly will attempt to think through the difficult and challenging questions Jacques Rancière and Susan Ruddick pose above regarding the relationship between artistic practice, difference, and struggles for social justice across multiciplitous borders and urban contexts.

We will approach these age old questions through a conversation between two different Mediterranean cities: Athens and Istanbul. Athens and Istanbul are at one and the same time tied together and torn apart through histories and forces of colonial Ottoman and Western imperialism, shared geopolitical and imaginary borders between occident and orient, and questions surrounding Europeaness and modernity.

The symposium will hone in on these cities currently understood as sites of states of exception manifested through, respectively, different forms of economic violence and militarized oppression and governance, and the historical, material, and current struggles and potentials of and within their differential urban existences and city life. Via decolonial border thinking and practice we will approach these cities as ‘transmodern’ (Dussel, Grosfoguel) through a ‘fractal, poethical and compositional thinking’ (Denise Ferreira da Silva) which problematizes linear thought and Habermas’s notion of rational consensus, the public sphere, and the unfinished project of modernity.

How do particular sets of constraints and discomfiting encounters constitute improvisations, in which artistic, social and cultural practices, by way of their myriad processes, articulations and forms, offer methods and blueprints for compositions of life otherwise? What still remains possible in the art of the possible? Engaging with these questions and refusing a nation-state framework we will think through forces of fugitivity, affect, debt, censorship, fragmentary and diffuse desires and activisms, institutions, global flows of capital and art, and the spatial remains and immeasurable shareability manifested in ‘vitalism’s afterburns’ (José Muňoz), trails and possibilities emanating from within art and social practice, the art of organization, sense, border crossing, becoming and unbecoming. 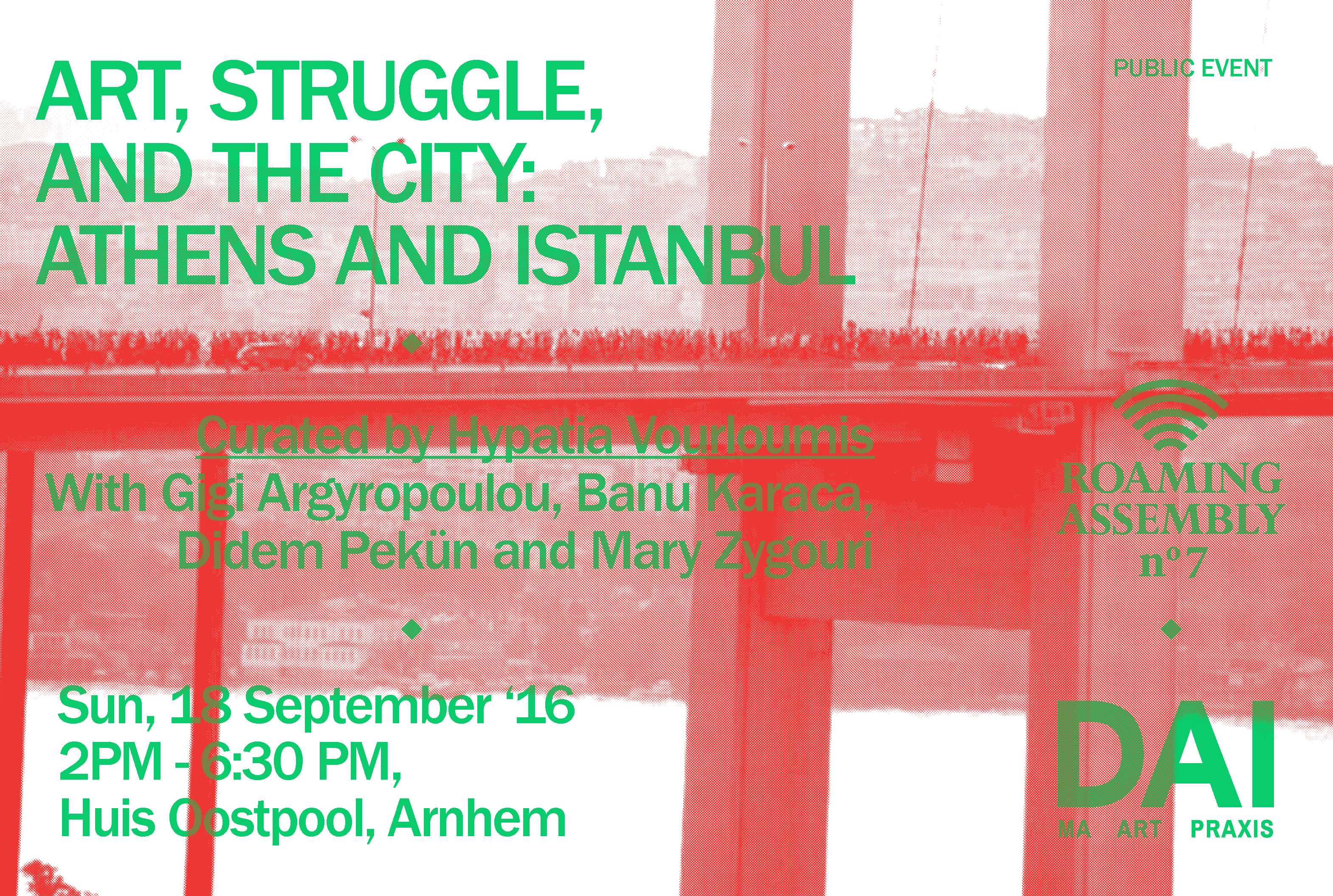 ROAMING ASSEMBLY#7~ART, STRUGGLE, AND THE CITY: ATHENS AND ISTANBUL