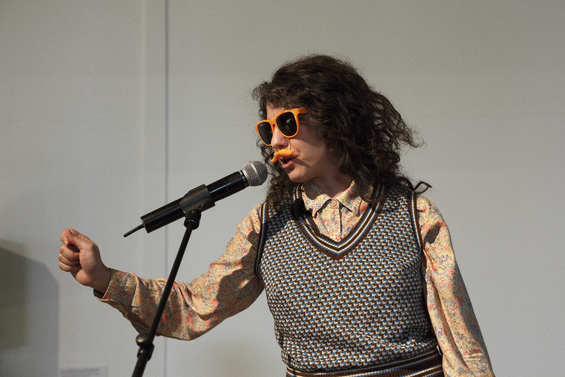 Rana Hamadeh is a performance and visual artist from Lebanon based in the Netherlands. Interested in a curatorial approach within her artistic practice, Hamadeh’s long-term discursive research projects operate as umbrellas to a growing series of performances, choreographic/cartographic works, installations as stage sets, and writing projects. Her work stems from an extended investigation into specific concepts and terms, treating the field of theory as fiction.

Alien Encounters, the umbrella of thoughts, propositions and claims was initially inspired by Sun Ra's 1974 film ‘Space is the Place’, which proposes an African-American exodus towards outer space in response to racial injustice. Hamadeh explains that it “came to life with the beginning of the Arab revolutions, and contemplates the notion of 'alien-ness': the outcast with regards to the law versus the extraterrestrial by bringing together elements, from science fiction film and literature, contemporary migration, capital flows, colonial legacies, mining and transport histories, cold-war aesthetics, as well as ideas on criminology, epidemiology and theatre.” 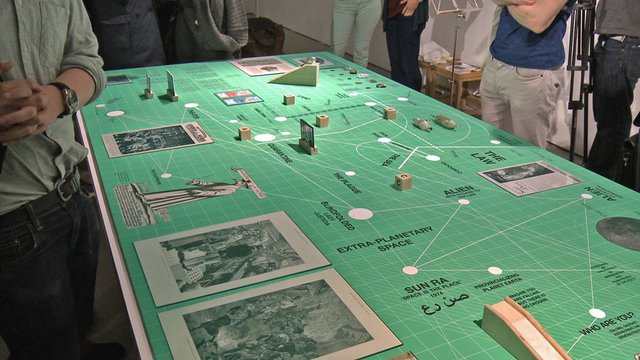 In her immersive sound play, Can You Pull in an Actor With a Fishhook or Tie Down His Tongue With a Rope? Hamadeh looks at how the Shiite religious ceremony ‘Ashoura’, which originally had a role as a militant form of theatre has transformed to a militarized form of theatre. She asks whether it is at all possible to script justice; to rehearse, orate, narrate, prop, weep, chant, choreograph, scenograph or even spectate justice? Hamadeh elaborates: “The sound play complicates the questions that I’ve been exploring alongside my companions on the boat in Marseille. My main question shifts in this work from ‘how can one constitute herself as a legal subject outside the logics of ground and Earth’ (getting back here to the idea of provincializing Earth); towards the question: ‘can one constitute herself as a testimonial subject in the place of the legal subject?’ The space of the testimonial—outside the plane of the law—is what is mobilizing my work right now. In my new works, extraterrestrial space turns into the discursive space of theatre. It’s like a full circle. And we’re back at the beginning again.”

Hamadeh's film play The Sleepwalkers re-dramatizes the story of Raya and Sakina, the infamous Egyptian sister serial killers, who in 1921 became the first women to be executed by a legal court in the modern history of Egypt. The two sisters, along with their husbands and two other male accomplices, were found guilty of the murders of 17 women, most of whom were sex workers. Commissioned by the IMA, Nottingham Contemporary, and The Showroom in London, The Sleepwalkers is the latest chapter in Hamadeh's long-term project Alien Encounters.