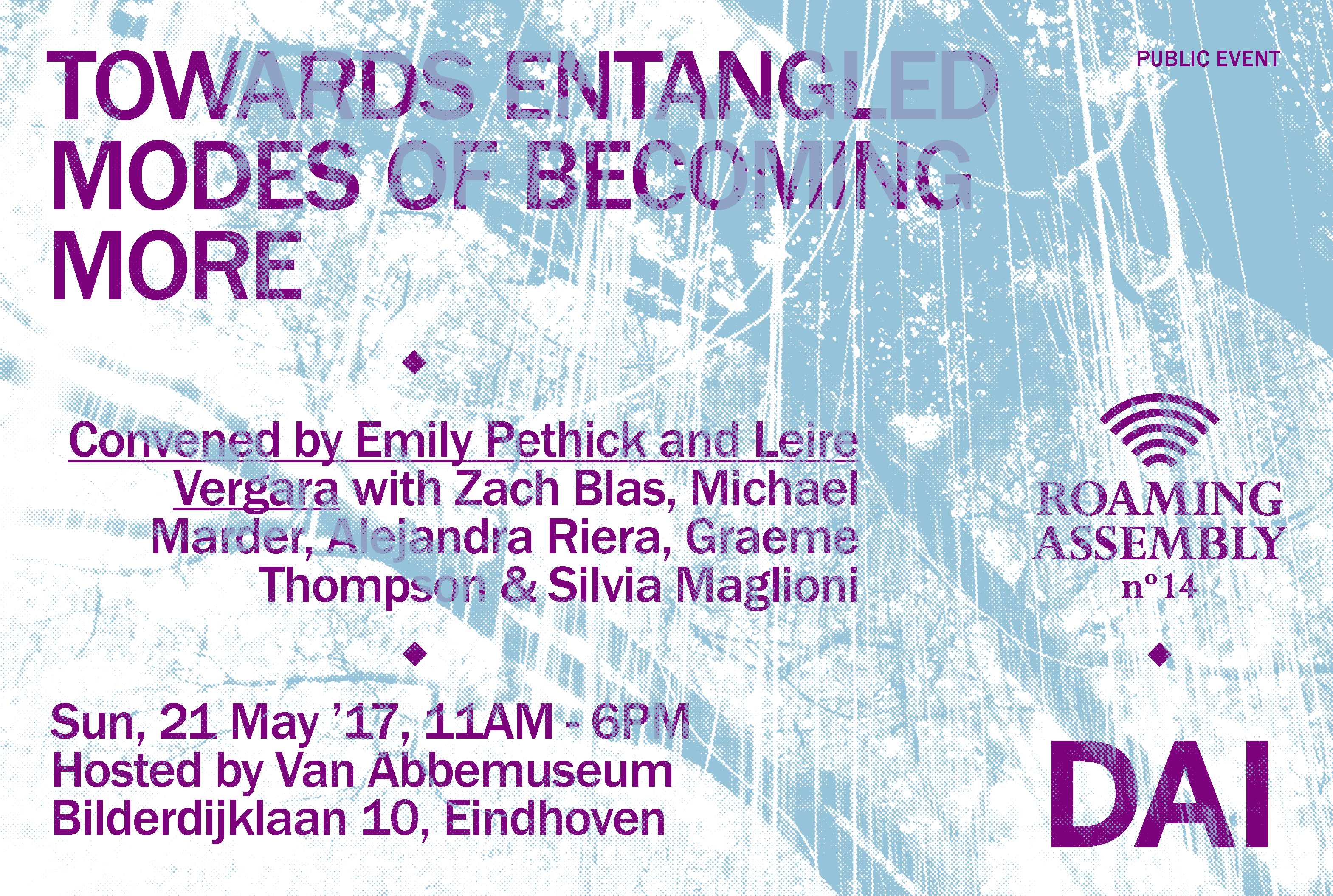 This year, at DAI, we've explored discursive, artistic and curatorial practices that challenge conventional exhibition thinking and formats. We've examined 'curating positions' evolving from behaviours, from political engagements, from texts and artworks, but also from futuristic visions for the museum of tomorrow; the contemplation of time through plants; from new terms, such as 'Afropea', proposed by Charl Landvreugd, that embodies the Afro-genealogy while confirming a cultural native-ness to Europe; from Tarot reading in a moment of crisis; and from Flamenco, New Babylon and other dérives…

You are warmly invited to further this exploration together with us, at the 14th edition of our Roaming Assembly (public, as always). This month DAI's Planetary Campus will be hosted by the Van Abbe Museum in Eindhoven, on Sunday, May 21, 2017.

In order to help us think of more complex and inclusive articulations of forms of coexistence, multiplicity, opacity, and entanglement,

Towards Entangled Modes of Becoming More

invites artists and theorists who are developing new ways to read contemporary modes of relationality, beyond singularities and binaries.

Within the framework of the Van Abbemuseum’s 2017 Caucus "Becoming More", this edition of the Roaming Assembly proposes us to engage, for a day, with the concept of 'entanglement' and its pliable potentiality. The program incorporates complex liaisons between human and non-human, between work and not-work, between the individual and the collective, between cinema and the infra-image. “Modes of becoming more" through "becoming less", as philosopher Michael Marder proposes, so to say, on the search for alternative non-hurting forms of being together.

with the help of the students of their

class at the DAI.

A film and a document of an experience signed on “the date of 9 July 2016” dealing with “places” and languages: those that are to be abandoned, those to be re-taken, those to be dreamt about, those that are most secretive. The discussion revolves around spaces and places of History, constructions, and demolitions, such as the removal of the statue of Colombus in Buenos Aires in 2014, among others. It also engages stories and storytellers, female narrators for whom there is often no space so that space has to be produced.

which will be served at the Designhuis (next door, at not even 4 minutes walking distance). If you wish to join us for lunch and dinner you will need to make a reservation. Please contact Peter Sattler<peter@peterkristinn.com> (closing date May ). Costs for members of the public: € 10 for food & wine.

From plants, we can learn how to become more by becoming less, that is to say, by minimizing the occasions for consuming, polluting, and despoiling the world. In this talk, Michael Marder proposes a model of energy inspired in a vegetal manner of being—an alternative, non-violent framework for thinking about and practically relating to energy without destroying living beings and our planet through its extraction. Together we will explore the qualities of the energy plants derive from the sun in the process of photosynthesis, which is non-destructive, world-preserving, and essentially superficial. Our guiding question will be not only how we can emulate plants with respect to these three characteristics but also, and especially, how we already harbor and at the same time suppress these promising features both in the history of philosophy and among the current possibilities of our individual and collective existence.

15:10 - 15:30 Michael Marder in conversation with Leire Vergara and DAI-students

This talk queries how the demand for the right to opacity that Édouard Glissant so passionately championed continues in struggles against security and control today. When considering biometric technologies or pattern-of-life analytics, reductive and disembodied algorithmic processes are deployed, so as to capture an objective truth of persons in order to eliminate risk. Such technologies transform embodied lives and relationalities into discrete and universal mathematical formalisms—what Glissant might term transparencies, a kind of barbarism. As such, an exit from security and control is imagined, through an entangling of two theoretical concepts: Glissant’s opacity and Donna Haraway’s “informatics of domination.” The resultant term “informatic opacity” operates as a minoritarian outside that may offer a more collective and transformative approach for resisting surveillance today, rather than the limiting politics of privacy. Indeed, as Gilles Deleuze reminds us, “The outside is always an opening on to a future…”

The Dark Matter Cinema Tarot is a vernacular technology, a tool to collectively explore ways in which cinema images can open up new channels of infra-perception connecting different realms of personal, aesthetic, social and political experience and enquiry, reaching towards the dark matter that haunts the "still moving" image.
In conceiving the DMC Tarot, Silvia Maglioni & Graeme Thomson have replaced the Major and Minor Arcana with a selection of still images drawn from cinematic memory. No longer tied to the symbolism of the classical tarot, the DMC cards, suspended between contingency and fatality refract questions posed to them through a process of speculative description and collective fabulation, with each reading forming a singular montage of gestures, situations, and relations. Each consultation of the Tarot summons a Nocturnal Committee to pursue the alternative narratives and divinatory or schizoanalytical possibilities that may be harbored in the constellation of figures, forms and forces resulting from the fall of the cards.

which will be served at the Designhuis (next door, at not even 4 minutes walking distance). If you wish to join us for lunch and dinner you will need to make a reservation. Please contact Peter Sattler<peter@peterkristinn.com> (closing date May ). Costs for members of the public: € 10 for food & wine.

*Free admission to all, reservations only needed for lunch and dinner: please contact Peter Sattler<peter@peterkristinn.com>.

* During lunch and dinner Walter Books will be present at the Designhuis with a curated selection of books for sale.

is a recurring public symposium scheduled to take place once a month, functioning as it were as the DAI-week's 'centerfold' event. This state-of-the-art speculative and hybrid program explores specific themes and topics of contemporary relevance to the thinking of art in the world today. It is considered a key part of the DAI's (version of the) Planetary Campus - an 'affective community' (Leela Gandhi) where caring for the earth goes along with the generous sharing of art and research, where complexity can be embraced and intellectual intra-actions are fostered, aiming to endow our praxes, wherever they are operational.

Communication design: Lauren Alexander/Foundland, this month the visual is based upon an image made available by Michael Marder.

This edition of our Roaming Assembly program is part of the Caucus: Becoming More as DAI is main partner of this inclusive and discursive event, initiated by the Van AbbeMuseum. During the Caucus DAI will take up residence in Eindhoven. DAI's monthly courses, seminars, classes, performances and exhibitions will run concurrently or become entangled with VanAbbe's programming.