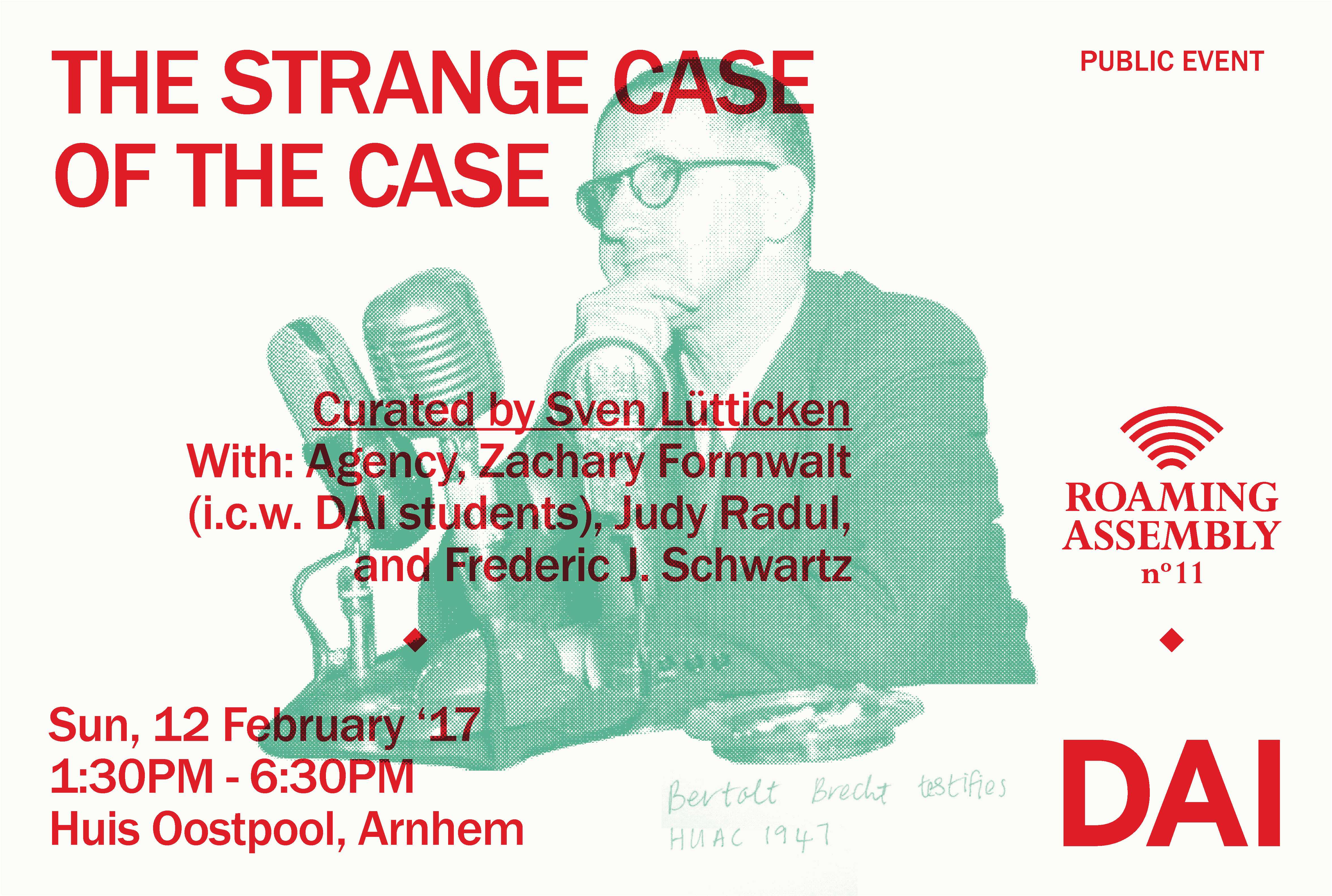 You are warmly invited to join us in Arnhem on Sunday, February 12, 2017 for the 11th edition of our Roaming Assembly, during which the theatre Huis Oostpool in Arnhem becomes a meta-court in which artists and art historians discuss and (re)enact legal cases. It is in courts that the world is remade on a case-by-case basis. If, for Cicero, actors merely mimic the real while (legal) orators act the real, this distinction is far from clear-cut. Even while the juridical seeks to regulate art and fully subject the aesthetic to the productive logic of (intellectual property) law, the court case as legal theater can be subject to unscripted interventions by various players.

The Strange Case of the Case

"We are turning towards (....) a nineteenth century United States Supreme Court case that would prove foundational in the establishment of corporate personality as it is understood today in the United States. We’re going to stage the filming of the testimony in question as a series of screen tests. There are some prepared answers to some prepared questions. A lawyer should never ask a question to which s/he doesn’t know the answer, as the saying goes. Since we are not lawyers, there will hopefully also be some unprepared questions."

15:15  Frederic J. Schwartz,  “Brecht’s Threepenny Lawsuit and the Culture of the Case.” Lecture.

Brecht was a connoisseur of the legal case. From his essay on the Threepenny Lawsuit to many dramatic scenes of courts or tribunals, he showed a longstanding fascination with legal process. Yet while the Threepenny Lawsuit is a touchstone for critical discussions of modern media, it remains relatively little studied as a reflection on the law and as an intervention into contemporary discussions of it. This paper asks why, and seeks an answer by looking first at legal proceedings as a medium, and second at the media of the law.

As an artist that works with video Judy Radul has been interested in how the increasing inclusion of video in the courtroom turned the court from a solely theatrical/literary sphere to a videographic one. She wonders about how artists' use of the medium can be critically related to the use of video in the court room. Related questions about the use of video as evidence also arise. How do legal video aesthetics intersect with video art aesthetics? For this talk she will show examples of her work and the work of other artists to anchor these discussions.

17:25  Agency: Assembly (The Strange Case of the Case), lecture performance

*Location: Huis Oostpool, Nieuwstraat 58, 6811 HX Arnhem in Arnhem (at 5 minutes walking distance from the DAI's premises in the Kortestraat and 10 minutes from Arnhem's central train station).

If you wish to join us for this dinner you will need to make a reservation. Please contact n.doulos@artez.nl (closing date February 8). Costs for members of the public: € 10 for food & wine.