Feb 3 OPENING at Nottingham Contemporary: 'The Place Is Here' - around 100 works by over 30 artists and collectives from the 1980s (an expanded version of a presentation DAI-tutor Nick Aikens curated at the Van Abbemuseum in 2016 titled Thinking Back: A Montage of Black Art in Britain). 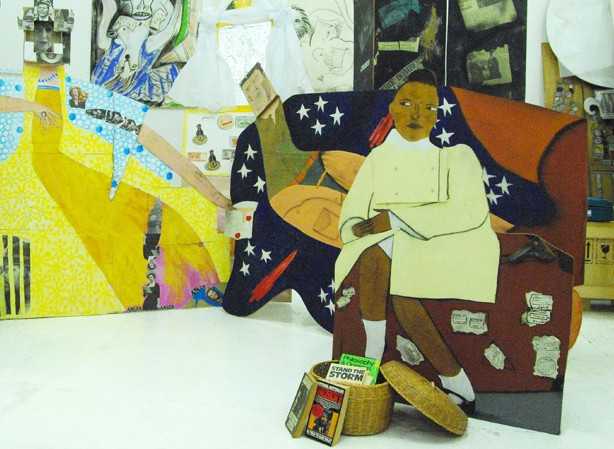 Join DAI-tutor & curator Van Abbemuseum Nick Aikens for the launch of the upcoming exhibtion The Place Is Here featuring 100 works by over 30 artists from the 1980s, exploring this pivotal decade for British culture and politics. The exhibition opening is followed by a party until 11pm featuring live music and DJs. Book your Ticket

The Place Is Here

brings together around 100 works by over 30 artists and collectives spanning painting, sculpture, installation, photography, video and archival displays from the 1980s, exploring this pivotal decade for British culture and politics.

The exhibition evokes urgent and wide-ranging conversations taking place between black artists, writers, thinkers and institutions that addressed identity and representation, racism and colonial legacies. The 1980s was a time of racial division, economic inequality and civil unrest in Britain. Equally, art, its history and institutions were perceived as white and western-centric. Today, these debates feel more relevant than ever.

Throughout the exhibition, montage emerges as a key device through which artists were re-assembling histories and identities under new terms. The Place Is Here is itself conceived of as a kind of montage. Different positions, voices, media and archives are assembled to present a portrait of a period that is not tightly defined, finalised or pinned down.

The Place Is Here is curated by Nick Aikens and Sam Thorne. The exhibition is an expanded version of a presentation Aikens curated at the Van Abbemuseum, Eindhoven, in 2016, titled Thinking Back: A Montage of Black Art in Britain. Archival displays are curated in collaboration with June Givanni, Lubaina Himid, Keith Piper, Vanley Burke and Marlene Smith.