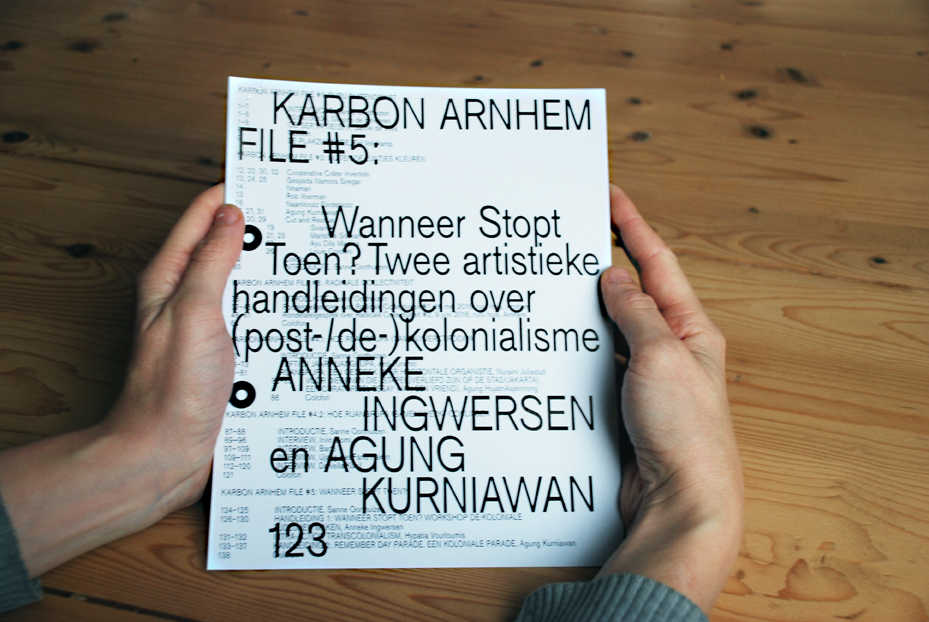 "I am glad to inform you that all Karbon Arnhem Files published in the framework of SONSBEEK '16 transACTION, as part of the editorial are now available with English translations.

Karbon Arnhem File #5 Wanneer stopt toen?,  became a collaborative work between artist/educator Anneke Ingwersen (DAI, 2015), artist Agung Kurniawan, curator/editor Sanne Oorthuizen, and the graphic designer Robert Milne (Werkplaats Typografie, 2017). This publication takes the form of two artistic tutorials about (post-/de-)colonialism which comes from the conviction that postcolonialism is not just an intellectual legacy, but actually necessary as an active practice. Finally the text by Hypatia Vourloumis offers a theoretical intermezzo.

Karbon Arnhem File #5 is now digitally available as a PDF with annotations in English: If you are interested you are invited to open the link http://www.sonsbeek.org/en/karbonarnhemfiles/

Please be aware that in order to see the English annotations you will need to actually download it (and not just open it as a preview)! 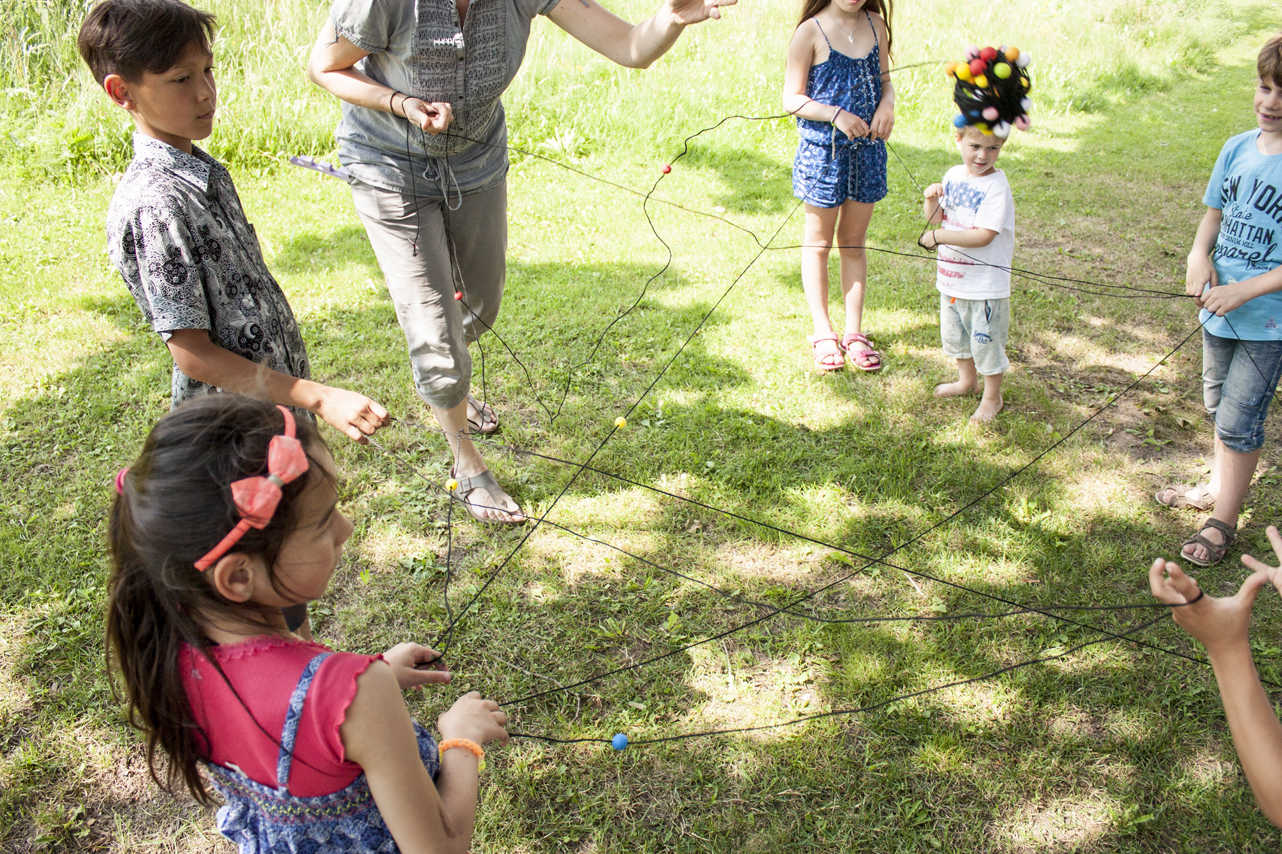 To be able to reflect critically on current, political and social issues in their complexities, an awareness of so-called ‘coloniality of power’ is necessary, i.e. the fact that European colonialism affects present forms of social discrimination. This publication tries to bring to light those structures and ‘habits’ on an artistic, critical and playful manner and ultimately, to question them. The ‘Remember Day Parade’ by artist Agung Kurniawan plays with collective memory and the performativity as well as the (re)production of history. The first ‘Remember Day Parade’ on Dutch ground took place in June 2016 as part of the opening week of SONSBEEK '16 transACTION. Artist Anneke Ingwersen enters the domain of education with the intergenerational workshop ‘Wanneer Stopt Toen (When Does Then Stop)’, and questions, together with children and adults, the unilateral timelines that are being used in Dutch primary schools to teach history. Finally the text by Hypatia Vourloumis offers a theoretical intermezzo. Although she wrote the text under separate cover, as an introduction for a symposium, we are of the opinion that the speculation by Vourloumis about what colonial practice looks like (“How does it read? How does it sound? How does it feel?”) grants important philosophical insights into coloniality. When you are aware of the effects (and affects) of coloniality, you can begin to wonder how you can shake off the yoke of coloniality in your daily life.

The form of tutorials suggests that everybody is invited to organize one of the actions themselves share the outcomes, I, Anneke Ingwersen, have published the facebook page Wanneer stopt toen? Link: https://www.facebook.com/wanneerstopttoen/?fref=nf 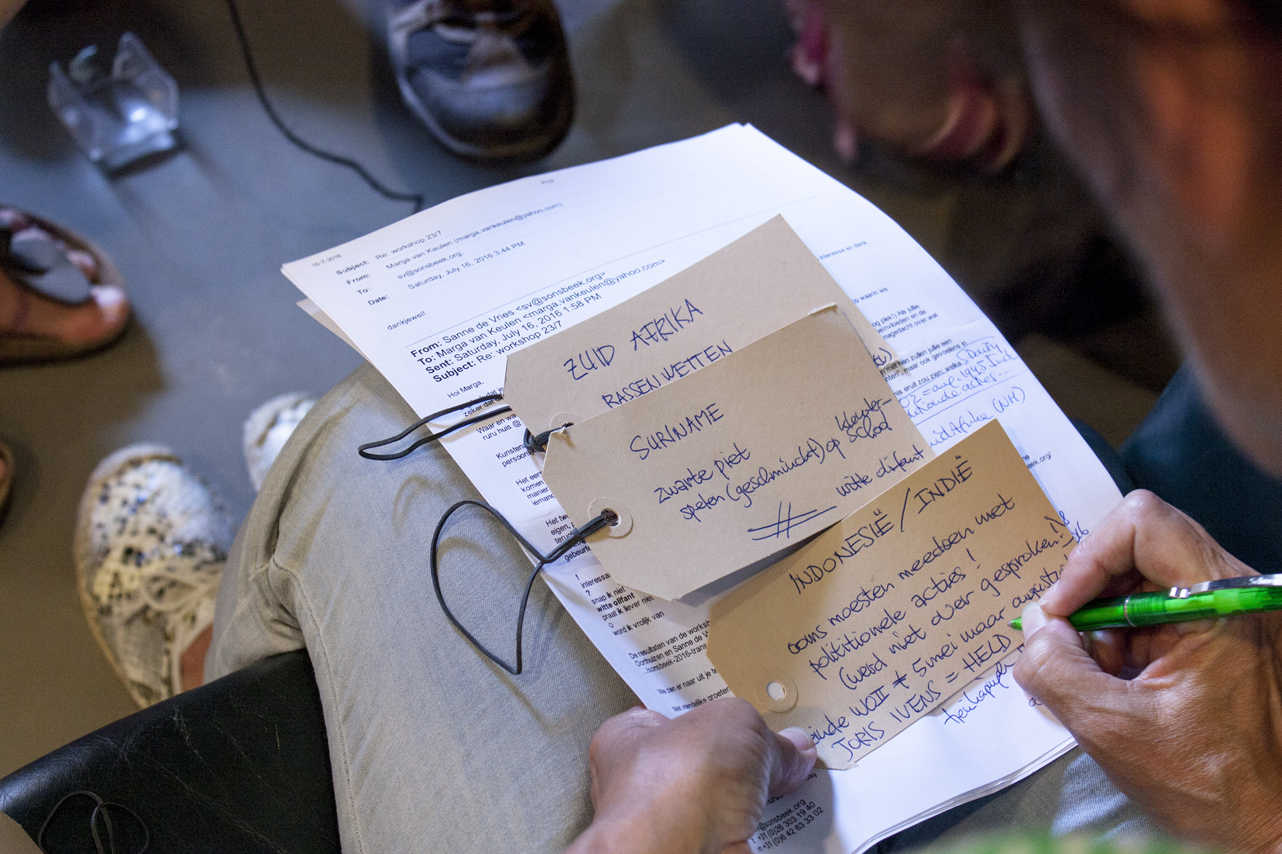 The tutorial 'How to organize a workshop de-postcolonial timelines' is part of a long term social artistic project Wanneer stopt toen? (When does then stop?) which looks more closely at the traces of the colonial past in our present, taking the Netherland as a case study. In Ann Laura Stoler’s words: “How do colonial histories matter to the urgencies and conditions of our current world? How have those histories so often been rendered as leftovers, as ‘legacies’ of a dead past rather than as active and violating forces in the world today?”.(Ann Laura Stoler, ‘Duress: Imperial Durabilities in Our Times’, 2016).

An example: When a group of fifth grade primary school was looking at a 17th century portrait the student Mark, aged eight, asked: “Ms, why are there no black people in that painting?” The teacher, who is white like me, felt uncomfortable and gave an evasive answer. I felt touched, but also kept silent. There was a ‘large white elephant’ in the room, which nobody could ignore but from which everyone looked away. The elephant is colonial history. A seemingly innocent lesson in image observation demonstrates that the tracks of the colonial history are not in a stale and distant past, on the contrary: four hundred years of thinking and feeling colonial history impregnates our life with stereotypes, bias, and uncomfortable silences. The fact that I kept silent to the pertinent question by Mark bothered me and gave way to an impulse to find ways to explain and overcome that silence.

“Colonial aphasia”, a phrase determined by New York anthropologist Ann Laura Stoler offers a point of departure. Stoler postulates: “With aphasia the obstruction of knowledge is meant. It is not a matter of ignorance or absence. Aphasia is a splitting, having trouble speaking, having trouble finding a vocabulary in which fitting words and concepts are associated with fitting items.” Consequently, aphasia has nothing to do with the loss of memory (amnesia), but originates from a lack of words, facts and knowledge with which we can speak about our colonial history. Concerning this wish to find these words, facts and knowledge, I started a study into timelines that are being used in history lessons at primary school and found out that the source, or in any case one of the sources, of the “colonial aphasia” Stoler speaks of is in education. 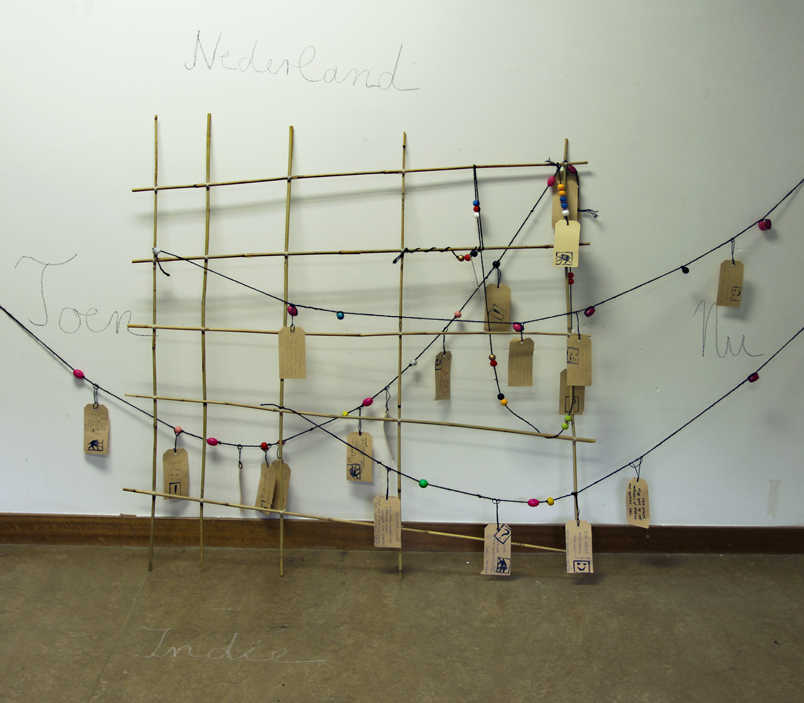 After researching the material used in primary schools for the lessons in history, and more specifically, the Dutch colonial history, I came to the conclusion that education in history and culture keeps reproducing stereotypical representations of the ‘other’, by showing one national timeline, and re-telling tales of national heroes and negating others, with the consequence that the cultural archive of future generations keeps being filled up with images that reproduce stereotypes and white innocence.

The first workshop Wanneer stopt toen? took shape during an initial attempt in July 2016 at SONSBEEK '16 transACTION in the park Sonsbeek with children and adults. During the workshop the participants made personal and alternative Dutch timelines based on personal events, with a focus on colonial history. The adults shared their memories, experiences and stories, whilst learning from children how to deal with ‘awkward’ subjects. All events on the timelines were marked by signs, making ambivalent and sometimes conflicting feelings visible. Perhaps we can, for a moment, destabilize the ‘great’ history being impressed on us by the nation state, to use that unstable situation to embed alternatives and to insert footnotes. The aim of the workshop was to let ‘other’ perspectives and voices speak, and thus sketches a more diverse image of Dutch history. This was not meant to bond the ‘Dutch citizen’ through a source of national pride in a chronological, national timeline, but to show a web of interwoven stories and clashing interests. How can we create together a different kind of visual representations of ‘histories and herstories’ and share them with the future generation? "