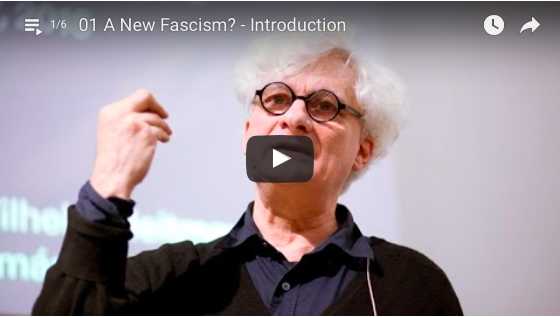 In conjunction with the exhibition Two A.M. by Loretta Fahrenholz, the Fridericianum hosted a symposium devoted to an exposition of new forms of fascism. In her novel entitled Nach Mitternacht (After Midnight, 1937), Irmgard Keun describes everyday life in Nazi Germany in the late 1930s under the dominant influences of fear, government control and despotism. In her current exhibition at the Fridericianum, artist Loretta Fahrenholz calls attention to similar contemporary phenomena. Based loosely on Keun’s exile novel, her Two A.M. is a socio-fiction film in which she presents frightening analogies to present-day surveillance, capitalism and re-emerging fascism.

One of the essential characteristics of representatives of the new Right, from the Hungarian Prime Minister to Marine Le Pen, is that they all regard themselves as democrats. And when we listen to them, they seem to become more democratic every day. Without blushing, the AfD compares itself to the Third Reich resistance group known as the “Weiße Rose.” And the French Front National proudly points out that it was the only party in France whose members voted in a democratic referendum on the European constitution. All of the established parties in France had refused to take part in such a referendum for fear that the European constitution would ultimately be rejected.

Thus the obscurity of European institutions can surely be cited as one of the reasons for the emergence of new right-wing movements in all European countries. And the increasing popularity of the new right-wing and nationalist parties can also be attributed at least in part to the movements of migrants and refugees, which are certain to continue unabated in the foreseeable future. We must agree with Zeev Sternhell, who insists that the fascist mentality that emerged in the early twentieth century never really disappeared. Fascist currents have always existed in more or less visible form, and they are now reappearing in a new guise. Fascism has reinvented itself, as Alain Badiou pointed out ten years ago. It has assumed new forms which must be analyzed. And the old theories regarding fascism are no longer adequate for that purpose.