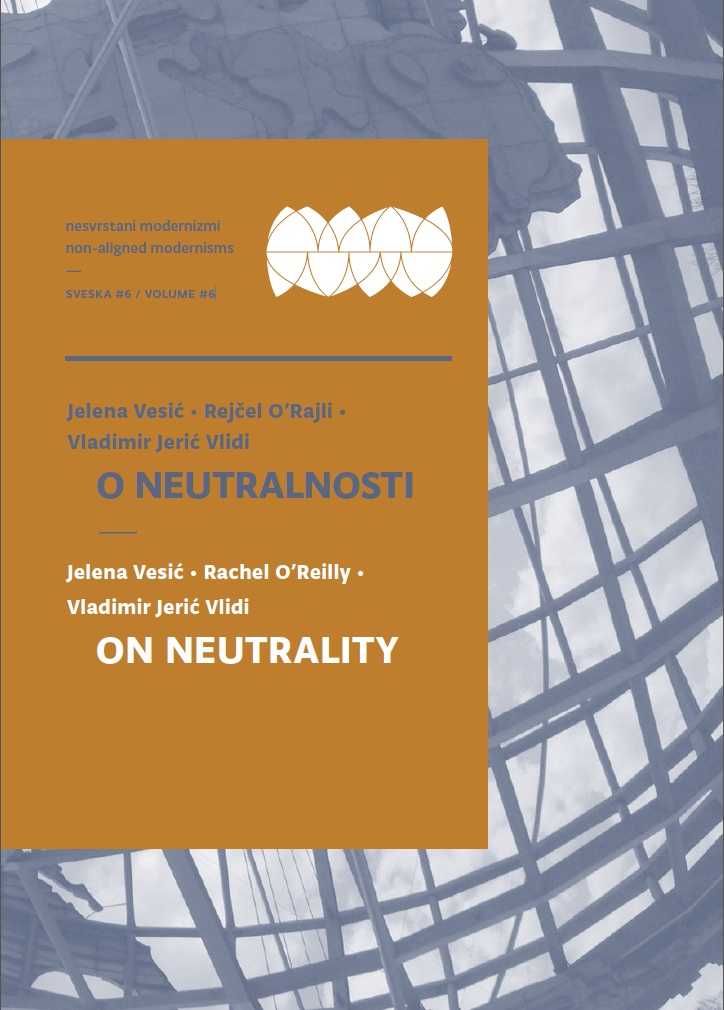 We are small and we have politics

Re-claiming neutrality as a politics of de-colonisation, independence, peace and non-alignment with the powerful world empires, the lecture performance On Neutrality draws upon the active positioning of non-aligned and ‚third world countries‘ gaining independence during the Cold War era. In contrast to the moral minimalist concept of neutrality as it is mobilized in liberal governmentalities, across art and politics, the project considers the rich variegated recent history of situated, politicised forms of neutrality concepts. This politicised history of neutrality concepts will be juxtaposed with the waves of depoliticising neutrality, including curatorial neutralisations of politics, which, aided and abetted by the humanitarian rhetorics of contemporary art, persist in attenuating institutional anxiety and agonistic possibilities of production in contexts of re-colonisation by multinational corporations.

On Neutrality was a part of Travelling Communiqué research and exhibition project (Museum of History of Yugoslavia, Belgrade, 2014) and Non Aligned Modernity book edition (Museum of Contemporary Art Belgrade, Serbian/English). The lecture performance was presented at Savvy Contemporary Berlin as part of the exhibition From Bandung to Berlin: If all of the moons aligned.

Rachel O’Reilly is an independent writer/artist, curator and researcher. She works on comparative aesthetic politics of governmentality, installation and language practices, and is a Seminar Leader at the Dutch Art Institute’s ‘How to Do Things with Theory’ program, presenting the course ‘At the Limits of the Writerly’. In 2013–14 she was in residence at the Jan van Eyck, developing The Gas Imaginary, an artistic research project on unconventional extraction. From 2004–08 she was a curator of the moving image at GoMA and the Asia Pacific Triennial. She has an MA in Media and Culture from the University of Amsterdam and writes with Danny Butt on artistic autonomy in settler colonial space.

Jelena Vesić is an independent curator, writer, editor, and lecturer. She was co-editor of Prelom—Journal of Images and Politics (2001–2010) and co-founder of the independent organization Prelom Kolektiv. Active in the field of publishing, research and exhibition practice that intertwines political theory and contemporary art, she is also co-editor of Red Thread journal and a member of editorial board of Art Margins. Vesić explores relations between art and ideology in the field of geopolitical art history writing, focusing on experimental art and exhibition practices of the 1960s and 1970s in former Yugoslavia and Eastern Europe. Jelena holds a PhD in Interdisciplinary studies from the University of Arts, Belgrade and is currently on a Goethe Fellowship at Haus der Kunst Munich.

Vladimir Jerić Vlidi is a media researcher, editor and author. Associated with various local initiatives he is or was a part of (Prelom Kolektiv, TEDx Belgrade, Reconstruction Women’s Fund, Darkwood Dub, Creative Commons Serbia and more). A member of the editorial board of Red Thread journal for social theory and author of a number of independent projects, Vlidi holds MA in Culture of Global Media from Faculty of Media and Communication, Belgrade. Currently engaged with research and production of critical texts and translations from the fields of media theory, social theory and artistic practice.

Free admission
Open at events, by appointment,
and every first Saturday
of each month, 12-18 PM
Not wheelchair accessible