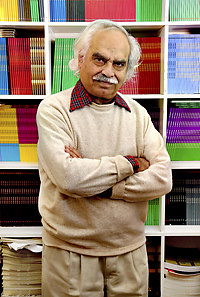 Rasheed Araeen (b. 1935) is a London-based artist, activist, writer, editor and curator. In 1964, he moved to the United Kingdom from Pakistan, where he initially trained as a civil engineer.
Araeen is recognized as a pioneer of minimalist sculpture in 1960s Britain. His work in performance, photography, painting, and sculpture throughout the 1970s to 1990s challenged Eurocentricsm within the British art establishment and championed the role of minority artists, especially those of Asian, African and Caribbean decent. In addition to his artistic practice, he took on activist roles with organisations such as the Black Panthers and Artists for Democracy, and founded the critical journals Black Phoenix, Third Text and Third Text Asia. Araeen organised the seminal 1989 exhibition, ‘The Other Story: Afro-Asian Artists in Post-War Britain’, which was held at Southbank Centre, London.
Author of numerous essays and journals, he has written Art Beyond Art: Ecoaesthetics—A Manifesto for the 21st Century (Third Text Publications, London, 2010) and the autobiographical Making Myself Visible (Kala Press, London, 1984). In 2017 he will have a major retrospective at the Van Abbemuseum, curated by Nick Aikens.