If I Can't Dance presents Edition VI—Event and Duration. 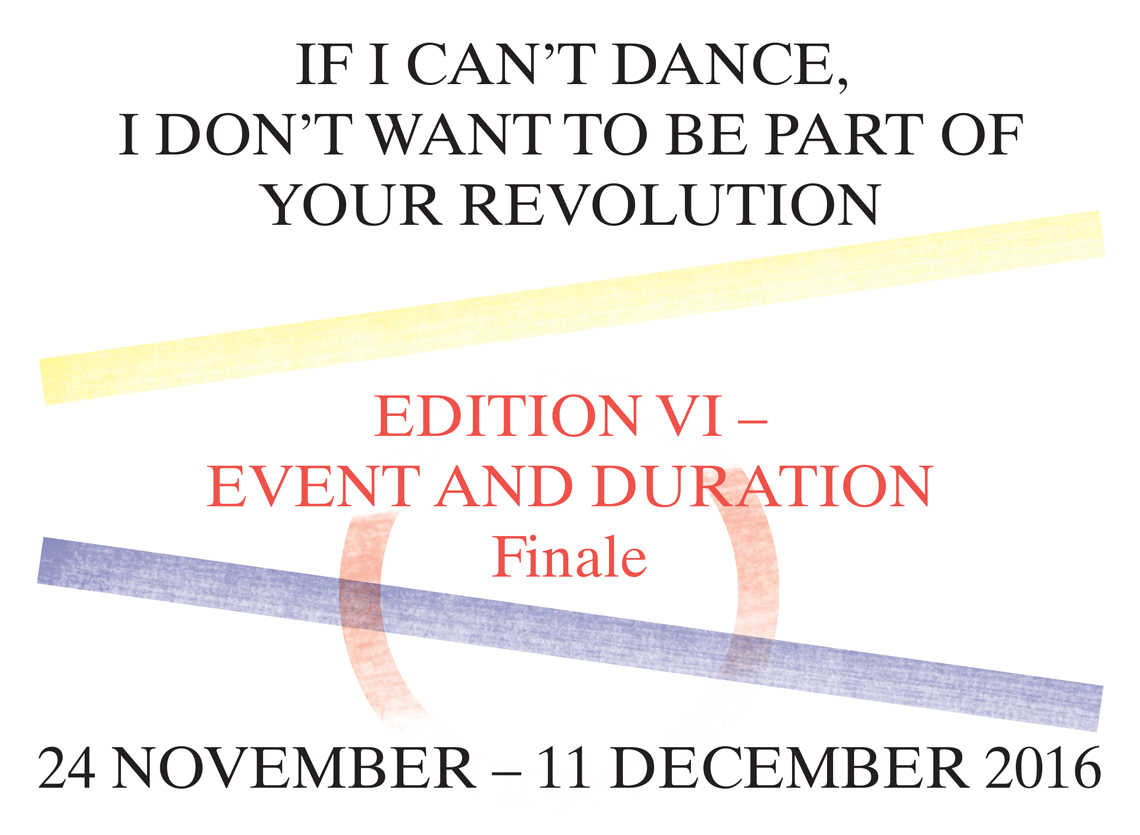 Various locations and venues in the east of Amsterdam Centrum

Full details of the programme and tickets are available for purchase at: eventandduration.ificantdance.org

From November 24 to December 11, If I Can’t Dance will present an elaborated programme highlighting the projects produced by the commissioned artists and researchers of Edition VI—Event and Duration (2015–2016). The programme will unfold at punctuated moments across the three weeks, and will be hosted in various locations and venues within walking distance in the east of Amsterdam Centrum.

Within the artist commissions, Naufus Ramírez-Figueroa will present a new performance as part of a cycle of works in which he attempts to exhaust the subject of the Guatemalan Civil War in his practice, accompanied by other videos in the series; Joke Robaard will host a premiere of her new video, which sees aspects of her archive of photographs and related texts from fashion magazines and other media sources performed by a group of teenagers through text rehearsals and discussions; Leonor Antunes will present a new work related to her research into architects Aldo van Eyck and Lina Bo Bardi; and Alex Martinis Roe will screen her major new film Our Future Network as part of a day-long performative salon of invited guests, in accompaniment to her solo exhibition, To Become Two, which traces the genealogy of “feminist new materialist” and “sexual difference” philosophies and is co-presented at Casco – Office for Art, Design and Theory, Utrecht.

Within the Performance in Residence research projects, Fred Moten and Wu Tsang’s sculptural-performance Gravitational Feel will provide visitors with a haptic experience to consider the question of how one can sense entanglement; Ueinzz Theatre Company and philosopher Peter Pál Pelbart will host an open rehearsal, conversation and performance that utilizes its schizoscenic constitution to cross frontiers between art, life, madness and subjectivity; and Erin Alexa Freedman and Lili Huston-Herterich will present aspects of the archive they created for the 1983 exhibition Chromaliving: New Designs for Living. Each Performance in Residence presentation will be accompanied by the launch of a publication of the accompanying research.

Together these presentations provide an opportunity to reflect upon the sum total of Edition VI—Event and Duration, with its concerns for lived relations, the experience of temporalities and modes of inhabitation within time and space.

These presentations will be complemented by contributions from invited and associated guests, including a screening by Alejandra Riera of her film made in collaboration with Ueinzz and a lecture by Jon Mikel Euba to complement the launch of a publication of his writing produced as part of If I Can’t Dance’s long-term educational partnership with the Dutch Art Institute. Both If I Can’t Dance’s monthly Reading Group and its Dancing Group, currently led by Amsterdam-based choreographer Michele Rizzo, will also have a presence.

The programme of If I Can't Dance is generously supported by the Mondriaan Fund, the municipality of Amsterdam, the Creative Europe programme of the European Union, Ammodo, and the AFK (Amsterdam Fund for the Arts). Fred Moten and Wu Tsang’s collaboration and Naufus Ramírez-Figueroa’s project are commissioned and produced as part of Corpus, network for performance practice. Corpus is made up of Bulegoa z/b (Bilbao), CAC (Vilnius), KW (Berlin), If I Can’t Dance (Amsterdam), Playground (STUK & M, Leuven) and Tate Modern (London). It is co-funded by the Creative Europe Programme of the European Union. Alex Martinis Roe’s project is additionally supported by the Keir Foundation and is co-produced by ar/ge kunst, Bolzano; Casco – Office for Art, Design and Theory, Utrecht; If I Can’t Dance, Amsterdam; and The Showroom, London. Alex Martinis Roe’s salon is If I Can’t Dance’s contribution to Roaming Assembly, Dutch Art Institute’s monthly discursive programme. The book by Jon Mikel Euba is co-published with the Dutch Art Institute. Special thanks to Amsterdam Art Weekend, Artis, Badhuistheater, Plantage Dok, Kriterion, Koninklijk Instituut voor de Tropen, San Serriffe, Splendor, Werkplaats Typografie, and Wittenburg Studios.

If I Can't Dance, I Don't Want To Be Part Of Your Revolution