"HOW Assemblies Matter?" The Athens Biennale OMONOIA launches an international participatory project by artist Jenny Marketou at the National Technical University of Athens. With the participation of a.o. Foundland: Ghalia Elsrakbi and Lauren Alexander (DAI, 2011) 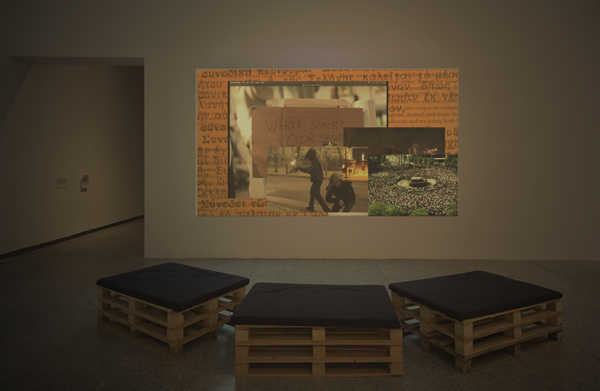 An International Assembly engaging more than 50 participants on social welfare, democracy, structures, actions, alliances and more. Free and open to the public.

HOW Assemblies Matter? explores notions on the apparatus of "assembly", a practice both ancient and contemporary as much as timely under the current political and social context. The project, initiated in 2014 by Jenny Marketou under the overall theme Assemblies: Acts of Social Urgency and Imagination, is an ongoing open project conceived as a social sculpture and an artistic experiment based on a series of collective actions and research. The Athens chapter is a collaborative investigation with Athens-based artist Zafos Xagoraris. The foremost discussion was demonstrated at Marketou's video installation The Assembly in NO Particular Order, (2016) and through Xagoraris' series of drawings featured in the traveling exhibition titled PIGS, (2016) launched at ARTIUM Museum, Vitoria-Gasteiz in S pain. This initial artistic presentation led to an ongoing research and collaboration on public space and interaction with different technologies and social groups.

In How Assemblies Matter? Jenny Marketou takes inspiration by models of public assemblies. Marketou refers to this current project as an art happening unfolding over a two-day event an "assembly on assembly".Its purpose is to amuse, provoke and even disturb, while it aims to address urgent issues of our times. The setting of MAX and Averof Amphitheatres located in the sprawling of the historical building of the National Polytechnic School of Athens were selected by Marketou to intensify the impact of the event. Using as script a series of questions posed by Marketou, 50 international participants will play out or perform a series of public "assemblies"and pop-up actions. They re-enact real assemblies while addressing urgent issues which come right out of our real life and culture. Each assembly or performance envisions a different structure and slightly distorted and absurd representation of our political or civic assemblies. T hey are using various performative methodologies, media and scenarios which elude into new habits of "assembly". They are sharing experiences from real democracy movements and artistic experimentation and exploring new ways of gathering: collective insights into the materiality, the timing, the agenda, the space, the desires and the catastrophes of people getting together in an assembly.

The project aims to travel in different countries and initiate local collaborations. The discussions, experiences, performances, actions will be documented in a daily blog and eventually in a film installation and a publication by Naked Punch, exploring the notion of "assembly" as a form of artistic engagement.

Organised within the framework of the Athens Biennale OMONOIA.

Participating Institutions: Students and Faculty from the School of Art and Design Kassel, Germany; the Zurich University of the Arts (ZHdK), Switzerland; the Royal Institute of Art in Stockholm, Sweden; the Escola Superior Artistica do Porto (ESAP), Portugal and the Athens School of Fine Arts, Greece.

About Jenny Marketou(Athens/New York): Jenny Marketou is an artist, arts educator and cultural producer who lives and works between Athens and New York. She has taught at Cooper Union School of Art in New York and most recently at the New Media and Photography Department at California Institute for the Arts, (CalArts) Valencia, California. She works across different media and platforms and defines herself as an initiator and often collaborates with multiple institutions as well as many individuals so that the full realisation of her artwork occurs when others adopt and perpetuate it.
Marketou's work has been widely exhibited internationally, in solo and group exhibitions such as Museum Tinguely in Basel, Switzerland; 1st International Biennial of Art of Cartagena de Indias, Colombia; the 4th Athens Biennale AGORA, 2013 and the Athens Biennale OMONOIA; ZKM, Karlsruhe, Germany; the 3rd Biennial of Seville; the New Museum of Contemporary Art in New York, Reina Sofia Museum of Contemporary Art, Madrid; The Queens Museum, and Apex Art, New York; The National Museum of Contemporary Art (EMST) in Athens. Artium Museum in Spain, Foundation Bouziol, Venice, MORE Art & High Line projects in New York, the Goethe Institute in Athens/Ankara/Berlin, Onassis Cultural Center, in Athens, Kumu Art Museum in Tallinn, Estonia, during its season as the European Capital of Culture, among others. She represented Greece at the Biennial of Sao Paolo in Brazil and in the Manifesta International European Biennial at Witte de With, Rotterdam.