2016 - 2017 HTDTWT: Speculation as a Mode of Production: Critique, Construction and Contestation 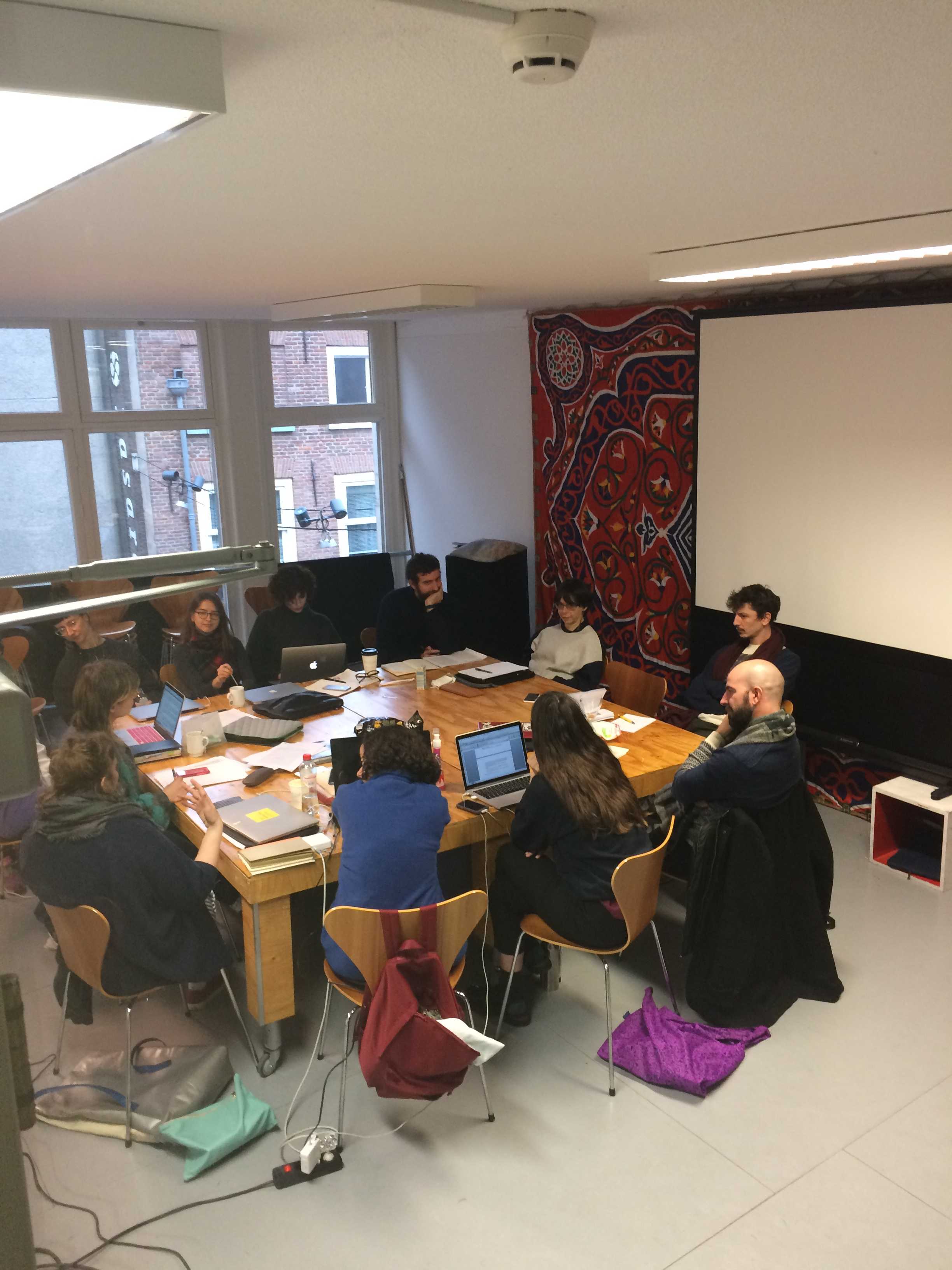 -Stefan Germer: 'The artist’s political engagement cannot consist in expanding art into society, but only in reducing art’s claims through the deconstruction of those mechanisms that establish and maintain “the artistic” as different from other social practices.’ '

- ‘If objectivity – that is, abstract subjectivity – is revealed as a function of whiteness and masculinity, a revelation made over and over in critical studies of race and gender, then it is not because the abstract individual promulgates his own subjectivity over others’, but because the conditions of his being materially and theoretically conflate objects and subjects.’ Hannah Black, ‘Fractal Freedoms’

Speculation as a Mode of Production: Critique, Construction and Contestation

In this seminar, we explore speculation as a grammar for thought, as a way of managing time in financial ontologies, and as a method for art and for politics. Taking on speculation as both a cultural logic and a method, this seminar will focus on the con/texts of theory, history, poetry and criticism to follow the materialities of (abstract) value as they summon the art and politics of the ongoing present.

I designate as the 'speculative', the reflexive and suspensive production of subjectivity as it echoes across the fields of art, labour, politics, 'nature' and the economy. In this seminar, I want us to think about the 'speculative' in a broad sense, a political sense, and a collective sense, and not just as a gentrified way of talking about markets or entrepreneurship through the displacing capacities of art. The condition of contemporary art as post-conceptual (Osborne) evacuates it of any positive content besides the network of relations in which it is positioned – we may also say 'the institution of art', as a social institution, a form of subjectivation, a social form – and the act of enunciation itself. Yet this does not mean that an inquiry into the significance and operativity of these terms in the present need be confined to description (aesthetic or sociological) but can expand by investigating both the structural-systemic and the transcendental-(in the Kantian sense, i.e. the condition of possibility) philosophical determinations that obtain on the entity of 'art' and its subjects as it has developed in European modernity and into the present as a form of suspension of labour, use and as a source of productive estrangements. Which is to say, the understanding that the term is a relational one, and that it is thus possible to develop a historically grounded narrative for what we can call the 'double' ontology of art, which is to say, it is double as an act or object and as a reflection on that act or object at the same time, presentation and representation. Questions we may ask could be, for example: what differentiates artistic practices from other kinds of activity, and primarily from labour? How does art live contingency? What kinds of things do we talk about when we talk about 'value' in art? Can we still think of art, as a practice or as a system, in terms of formerly polarized categories such as play and usefulness? Can we think of the speculative as a productive force, which can be mobilized by art as well as shaping it as an intimate exterior, can the speculative also be allaegorical (in this light, I would mention some of the practices we saw yesterday at the sympoisum, such as Mary Zygouri’s The Sound of Property)? What is the specific modality of speculation and how is that like or unlike proximate categories like exploitation, subsumption and abstraction? In this light, we have read the writing of Helmut Draxler, Daniel Spaulding, Brad Troemel, Claire Fontaine and Stewart Martin. Some possible readings I have in mind for this strand of our inquiry this year include Kerstin Stakemeier, my co-author for Reproducing Autonomy, which Hypatia generously mentioned yesterday, and Theodor Adorno.

A linked question will be the materializations of subjectivity in the crisis ordinary of latest capitalist life. This comprised the main current of our seminar last year. We looked at the production and reproduction of subjectivity, also from the standpoint of its most developed, or most saturated, instance in a capitalist society: the artist. We will consider the question through recent attempts to address it metaphysically, phenomenonologically, critically and through the lens of political economy. The subject will be taken as a 'real abstraction', that is, a social construct with real effects that we experience and embody, and which, as the felt sense of creative singularity, enmeshes us tightly with power as well as the embodied locus of experience which generates contradictions and excesses within it. At the same time, this post-Marxian and post-Foucauldian notion needs to be read through current scepticism about the 'subject' as a viable philosophical or strategic category. The collective, gendered and raced dimensions of subjectivity will perhaps be of greatest interest for this strand of the inquiry, as well as notion of de-subjectivation and the subject as a radical nothingness, sometimes counterposed with a new sovereignty accorded to the object. Some examples of the texts we examined in this direction are Hannah Black, Fred Moten, Lauren Berlant, Mykki Blanco, Lucy Beynon and Lisa Jeschke, Denise Riley and Sianne Ngai. So we have been spending time with poetry to a large extent last year, although not producing any directly in the seminar. The question of subjectivity and objectivity also needs to be asked from the standpoint of an actual but highly differentiated and differentiating eco-systemic crisis which will only escalate. Last year we read works addressing some of the imperatives cited by Jason Moore in the quote with which I prefaced this lecture, with an emphasis on feminist and queer epistemologies of 'entanglement' such as those of Karen Barad, through which we will think about what kind of speculative and materialist 'xenopolitics' is possible for us now. This will be done not as a way of affirming identity, even as a situated ground of critique, but of affirming the reality of antagonisms that produce identities. Jordan/a Rosenberg and Brenna Bhandar have also helped us delineate the conjunctions of financial, social and philosophical abstraction through their considerations of the historical synchronies between the development of finance and slavery, or speculative fiction as a way of mediating and exceeding oppressive abstractions of race, gender and the academic radicalisms that purport to go beyond embodied critique. This year I would like us to read Fred Moten, Saidya Hartman and Michelle Yates, among others, as well as feminist theorists of poetry and labour such as Amy De’Ath.

In the last two years, I kicked off the seminar with a consideration of the subject: object relation, in 2014 through reading an essay by Theodor Adorno on the topic, and last year by Alfred North Whitehead. This year, we will commence with a more methodological inquiry into critique and proximity from Benjamin Noys. We also always read Marx, at least once. This year I anticipate a return to using the prism of art to reflect on certain of the tensions I outlined above, and expanding our focus on language and materiality as ways of considering social abstraction. We will continue to address race, gender and coloniality as markers of what Hannah Black terms the ‘the cut by which nature is distinguished from culture, labour from labour’s reproductive outside, object from subject.’

HOW TO DO THINGS WITH THEORY: Speculation as a Mode of Production: Critique, Construction and Contestation from Month to Month